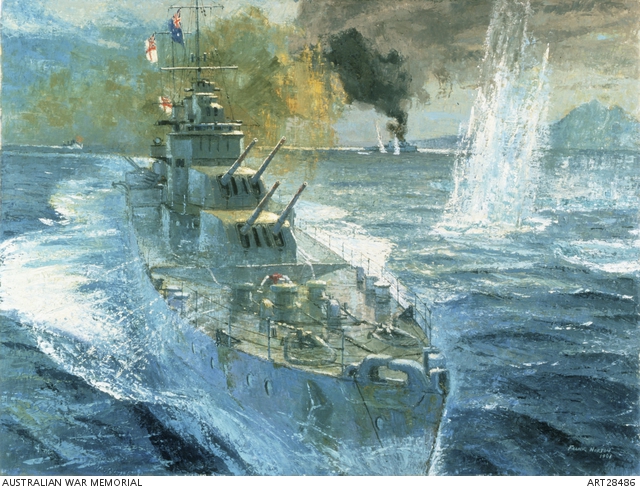 This large painting commemorates Sydney's place as one of Australia's most famous warships and its role in Australia's major naval success of the Second World War. In July 1940 a 90 minute battle between the Sydney and the Italian cruisers Giovanni Bande Nere and Bartolomeo Colleoni was fought off Cape Spada, Crete. Sydney fired upon Bartolomeo Colleoni and hit the boiler room of the ship, causing it to stop. Sydney then gave chase to Giovanni Bande Nere while the British torpedoed and sank Bartolomeo Colleoni. Thanks to its superior speed, Giovanni Bande Nere was able to outrun Sydney and escape. Norton has depicted Sydney ploughing through the ocean in chase of Giovanni Bande Nere, having successfully halted Bartolomeo Colleoni. Through the ocean spray caused by gunfire from Giovanni Bande Nere the hazy blue coastline of Crete can be discerned. In the distance the Royal Navy's destroyer Hyperion approaches the disabled Bartolomeo Colleoni to deliver the coup de grace. Norton has captured the drama of this event by depicting Sydney carving through the water at full speed. The sheer proportion of the picture plane devoted to the ship and the abundance of white water and foam, speaks of powerful movement of the ship through the waves. The stark yellow of the smoke that rises from the guns on the ship contrasts with the predominant blue of the painting, and draws the eye to the action that is unfolding in the upper third of the canvas. The painting was first accepted into the collection in 1942, but was later returned to Norton in 1961 for re-touching.