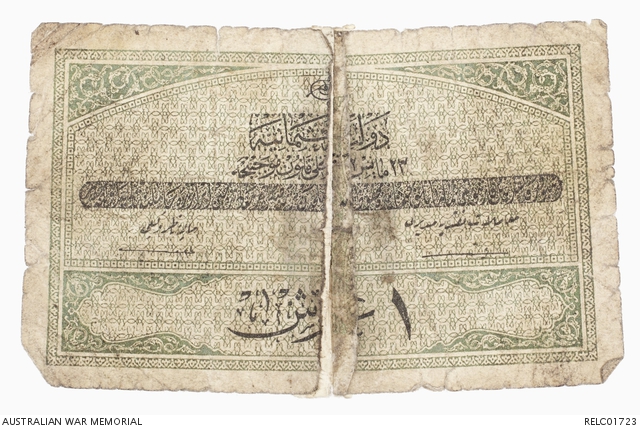 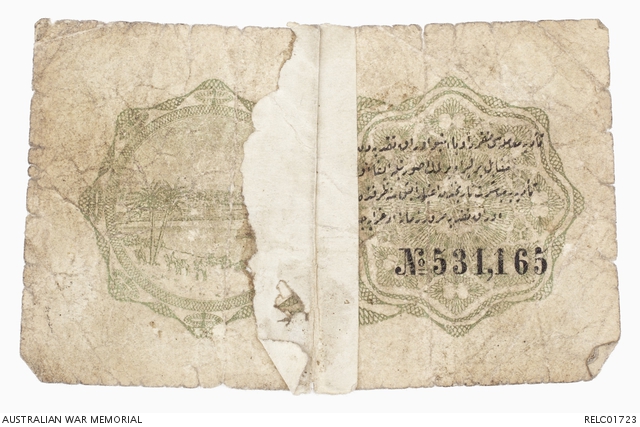 Green and black Turkish 1 piastres note, number 531165. The note has been circulated and has split in half vertically down the centre. A piece of masking tape has been placed along the back of the note to attached the two pieces back together. There is light staining and small tears along the edges of the note.

Associated with the service of Captain Thomas Walter White. White was born in Hotham, Victoria on 26 April 1888 and was selected for the Australian Flying Corps' first training course on 1 August 1914. He completed this course at the Central Flying School, Point Cook and qualified as a pilot.

Early in February 1915, the Indian Government requested the supply of an Australian air force unit to support the Indian Army's campaign in Mesopotamia. Forty five men, including White, were selected and the group was named the Mesopotamia Half Flight.

On 1 April White was promoted captain and adjutant of the Half Flight. He embarked for India aboard RMS Morea on 20 April and transferred at Bombay for Basra, arriving there on 26 May.

On 13 November White and Captain Francis Yeats-Brown, Royal Flying Corps, took off on a mission to destroy the telegraph lines along the main road from Feludjah to Baghdad. However, by trying to land as close as possible to the lines White struck a telegraph pole and broke the aircraft's lower left plane ribs and longeron. Nearby Arabs opened fire, but White was able to keep them at bay with a rifle kept in the aircraft. Yeats-Brown was able to successfully blow up the telegraph wires with guncotton; however White was not able to keep the Arabs away long enough to take off. Though the men started the engine, the aircraft became entangled in the broken telegraph wires and they were taken prisoner.

The Arabs struck White and Yeats-Brown with their rifle butts and as White had exasperated the Arabs by shooting back at them, struck him several times on the head. One blow, delivered with an adze, left a particularly bad wound. The men were taken to Baghdad, where they spent three weeks in hospital, including a week's solitary confinement. They were then sent to Mosul, where White was imprisoned for two and a half months before being sent to Afion Kara Hissar, the principal prisoner of war camp in Turkey. White was imprisoned there for over two years.

On 26 July 1918, owing to an enquiry regarding his health, White was transferred to a hospital at Constantinople. After being discharged, White arranged to escape with Captain Alan Bott, Royal Air Force. The pair succeeded on 24 August, when their train crashed while travelling over a viaduct at Kum Kapu. Taking advantage of the confusion, both men escaped, but became separated. White managed to elude capture by dodging into a house occupied by a sympathetic Greek man. He fitted White out with Turkish clothing and as a parting gift gave White a worn tobacco tin.

White then travelled by tram to Galata where he was joined by Captain Bott, who had also managed to escape capture. The men decided to stow away in a Ukrainian steamer docked in Constantinople Harbour. The vessel remained 33 days at anchor and the men spent an uncomfortable time below deck, sometimes hidden in the ship's ballast tanks. Eventually the steamer reached Odessa a few days after the city's partial destruction by the explosion of an immense ammunition dump. White found a damaged ammunition clip at the scene of the explosion.

Armed with false Russian passports, White and Bott were able to remain in Odessa for a month. They made arrangements to join the anti-Bolshevik army, but when they heard of the impending Armistice with Bulgaria, they stowed away in a Ukrainian hospital ship bound for Varna. Making their way through Bulgaria they reached Salonika only a week before the Armistice. They disembarked at Port Said on 25 November 1918. White was awarded a Mention in Despatches in July 1919 and a Distinguished Flying Cross on 3 June 1919 'In recognition of distinguished service rendered during the war'. White returned to Australia via America, disembarking in Sydney on 5 January 1920.