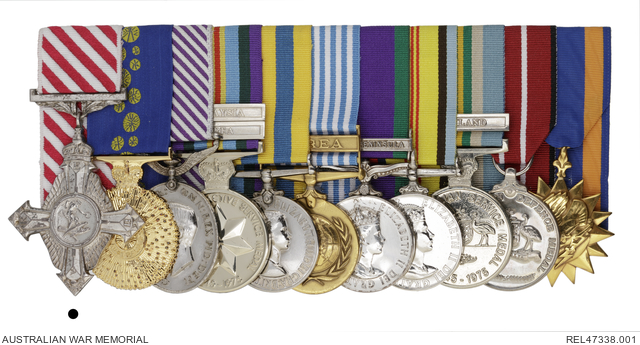 This Air Force Cross was awarded to O33838 Squadron Leader John Norris Parker as a member of the Royal Australian Air Force (RAAF) during the Vietnam War.

Parker was born in 1928. In 1950 he enlisted into the Royal Australian Air Force (RAAF)and qualified as a fighter pilot with the rank of sergeant.

His first experience of combat was flying with 77 Squadron RAAF who operated the Gloster Meteor multi-role aircraft. He served in Korea between January 1952 and July 1952 and was decorated by both Australian and American forces with the awarding of a Distinguished Flying Medal (DFM) and US Air Medal.

After the Korean War during the 'Confrontation' with Indonesia he served as Chief Controller and Operations Officer with No. 114 Mobile Control and Reporting Unit at Butterworth, Malaysia and also served in Thailand.

On other postings in Australia, Parker was 'A' Flight Commander of No. 23 (F) City of Brisbane (Citizens Air Force) Squadron, and Commanding Officer of No. 1 (B) [for 'bomber'] Operational Conversion Unit (OCU) at Amberley, Queensland.

In 1960, Parker was posted to Woomera, SA, as a member of No. 1 Air Trials Unit Target Aircraft Flight. This unit operated the pilotless V12 Jindivik, Meteor U15 and Canberra U10 aircraft as targets for radar tracking and live firing, using surface-to-air (SAM) and air-to-air (AAM) weapons. He was a member of the team which flew the aircraft unmanned, but also the test pilot who conducted the flight tests sitting in aircraft under remote control from take-off to landing on the flight before an unmanned live firing at the target aircraft. This flight could be a rather nerve-racking experience, particularly the landing.

Having undertaken a short tour in Vietnam, he developed an appropriate flying syllabus for aircrew converting onto Canberras for operational service with No. 2 (B) Squadron based at Phan Rang, South Vietnam. For this and for his command activities, Parker was awarded the Air Force Cross.

Parker retired from the RAAF as a Squadron Leader in 1970 and immediately joined the (then) Department of Civil Aviation, Melbourne, as an Examiner of Airmen.