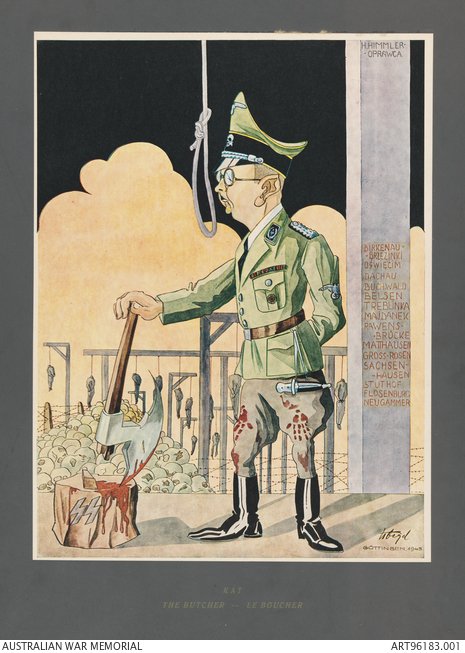 Macabre portrait of Heinrich Himmler (1900-1945) as executioner. Himmler is depicted standing in the foreground in his blood stained uniform. In his right hand is an executioners axe, dripping in blood, which he is resting on a round, wooden chopping block. The insignia 'SS' is inscribed on the block. In the background set against a black sky are gallows with nameless victims swinging from them, barbed wire and a giant pile of human skulls. To the right directly behind Himmler is the lower half of a gallows post inscribed in red ' H.Himmler, torturer' followed by a listing of 16 German concentration camps. The noose from this gallows hangs in front of Himmler's face. As Head of the Gestapo Himmler was in charge of the establishment and management of all Germany's concentration camps and the death camps in Eastern Europe. The print has been mounted on dark grey card. The title in Polish with English and French translation is printed bottom centre, beneath the image, in gold ink.