Pod murami getta w Warszawie...[Under the walls of the Ghetto in Warsaw...] 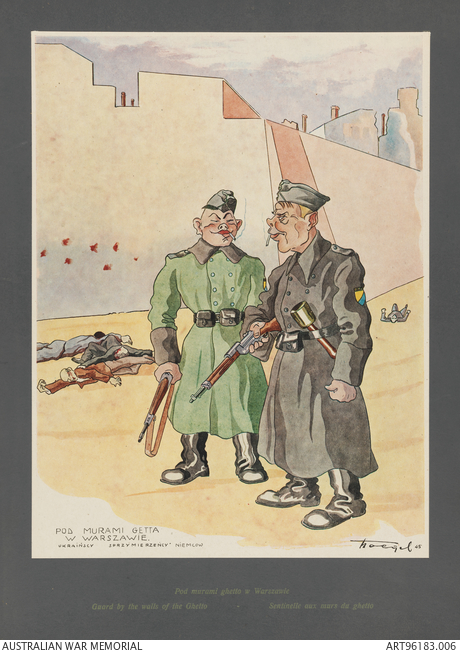 Satirical portrait of two Ukrainian guards under the walls of the Warsaw Ghetto. Both are smoking and heavily armed with the Ukrainian coat of arms visible on the left sleeves of their uniform. In the background there are groups of dead bodies. The wall of the ghetto is blood splattered as if the civilians were lined up along it and executed by the guards. In the lower left corner is inscribed in black ink in Polish 'Pod murami getta w Warszawie Ukrainscy sprzymierzency niemcow' which translates as 'Under the walls of the Ghetto in Warsaw - Ukrainian allies with Germany'. The print has been mounted on dark grey card. The title in Polish with English and French translation is printed bottom centre, beneath the image, in gold ink.

The artist Stanislaw Toegel was in Warsaw during the uprising of August - October 1944. He would have witnessed the atrocities and brutal treatment of the Polish population by the German forces. His Ukrainian guards would most likely have been members of the 29th Waffen Sturm Bridage RONA a Russian collaborating force made up of mostly Russians with Belorussian and Ukrainian minorities.