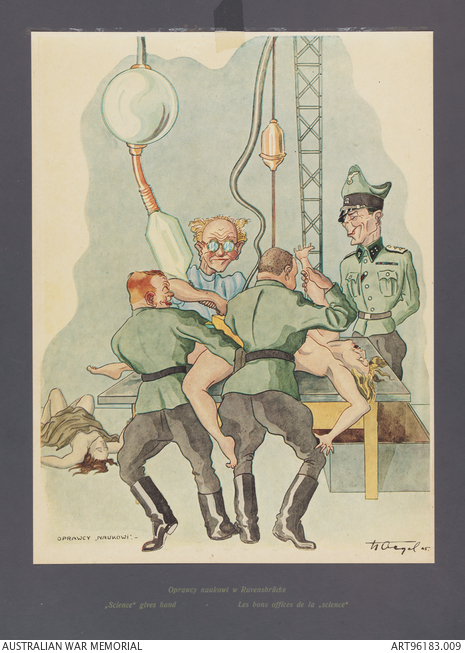 Macabre depiction of an experimental medical procedure being carried out on a woman by SS medical staff. The woman is on an operating table and being held down by two soldiers while a doctor in a blue surgical gown carries out the procedure. In the right of the image a senior SS officer watches on with pleasure. In the lower left behind the surgical team is another female victim lying naked except for a blanket. She is unconscious or dead. The print has been mounted on dark grey card. A title in Polish with an alternative English and French title is printed bottom centre, beneath the image, in gold ink. Unlike some of the other prints in this edition the Polish title is different to the other two. It translates as ' Torturers / researchers at Ravensbruck' whilst the English and French titles are ' Science gives a hand..'. Ravensbruck was a German concentration camp for women (1939-1945) located 9o kms north west of Berlin. The drawing refers to horrific medical experiments carried out on up to 74 Polish women (largely political prisoners) at Ravensbruck on orders of the Gestapo's medical division.
The original drawing reproduced in this offset lithograph was created by Polish artist Stanislaw Toegel (1905-1953) while held in a German labour camp at Gotteningen.