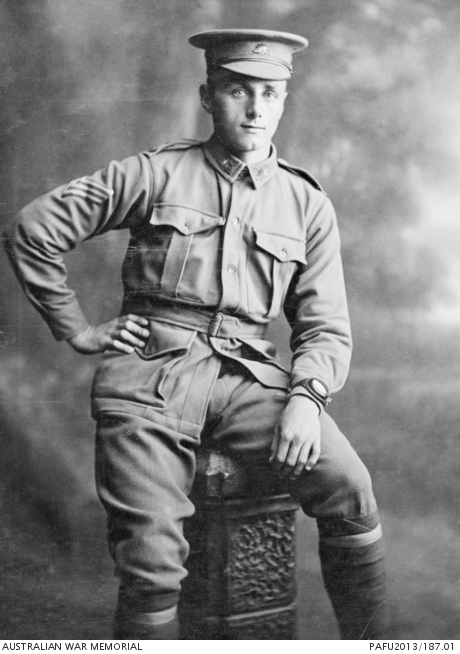 The Last Post Ceremony is presented in the Commemorative area of the Australian War Memorial each day. The ceremony commemorates more than 102,000 Australians who have given their lives in war and other operations and whose names are recorded on the Roll of Honour. At each ceremony the story behind one of the names on the Roll of Honour is told. Hosted by Andrew Smith, the story for this day was on (1857) Sergeant Douglas Bernard Matthew Adams, 10 Battalion, First World War.

Douglas Bernard Matthew Adams was born in 1897 at Alberton, Port Adelaide, South Australia, to Harry and Elsie Adams. He was educated at Port Adelaide Primary School and then won a scholarship to Prince Alfred College. He was noted for his fine athletic ability, and as a cadet soldier reached the rank of second lieutenant. After leaving school, Adams took up a position as a clerk with the South Australian Harbours Board at Outer Harbour, Port Adelaide.

He enlisted for service in the AIF at Morphettville Racecourse on 10 December 1914, aged 18, and was posted with the rank of private to the 4th Reinforcements, 10th Battalion. Promoted to sergeant in March 1915, he embarked from Adelaide on 1 April aboard HMAT A17 Port Lincoln and reached Gallipoli on 5 June, where he was taken on the strength of the battalion. At the time he arrived, the 10th Battalion was occupying trenches on the southern end of the ANZAC line around Silt Spur. Adams would have been involved in manning front line positions, working in carrying parties and many other duties undertaken by the battalion, both in the line and in support trenches. On 7 July, the 10th Battalion was resting behind the lines near Tasmania Post when they came under Turkish artillery fire. Adams was struck in the head by shrapnel, suffering a compound fracture of the skull. He was transferred to No. 1 Australian Casualty Clearing Station, where he died a little while later, and was laid to rest in Beach Cemetery.

Corporal Reuben Weatherall, in a moving letter to his own mother, recalled, "Sergeant Douglas Adams was one of my best friends, and his death affected me so much that I have not had the heart to write to his parents." He went on to say, "I heard that poor Douglas was hit, and went across to the stretcher where he was lying ... he lived for about an hour and was buried near the beach."

Weatherall survived the war, returning to Australia in May 1919. The Roll of Honour circular filled out by Adams's father, Harry, provides a glimpse of the pain the family were feeling at the loss of their boy, as well as a measure of their pride in what he had achieved in his all too brief life. Harry wrote that his son was "only an upright, sterling character".

Douglas Adams's name is listed on the Roll of Honour on my right, along with around 60,000 others from the First World War, and his photograph is displayed today beside the Pool of Reflection.

This is but one of the many stories of courage and sacrifice told here at the Australian War Memorial. We now remember Sergeant Douglas Bernard Matthew Adams, and all those Australians who have given their lives in the service of our nation.