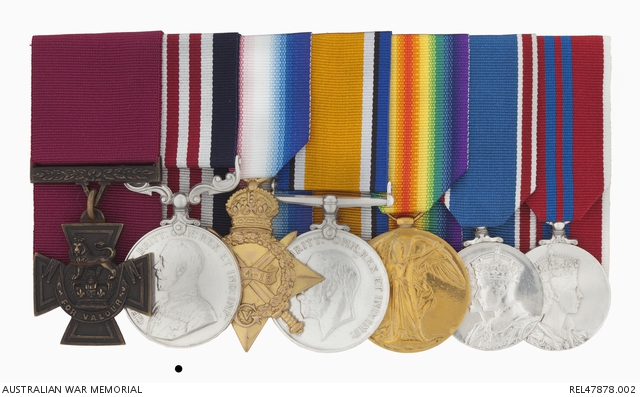 Stanley Robert 'Stan' McDougall was born in Recherche, Tasmania on 23 July 1889 and became a blacksmith. He enlisted in August 1915 and fought at Pozieres, Messines and Broodseinde and was promoted to sergeant in January 1918.

At Dernancourt on 28 March, when he saw the enemy knock out a Lewis gun position, McDougall attacked two German machine-gun teams, killing their crews by 'hosing' them with the Lewis. He then attacked a second wave of Germans, burning his hands on the hot barrel casing of his gun. When a German officer aimed his pistol at some Australians, McDougall killed him with rifle and bayonet. Twenty-two Germans were killed and 30 were captured, largely as a result of McDougall's actions. For his actions at Dernancourt he was awarded the Victoria Cross.

Eight days later, at the same place, McDougall won the Military Medal, taking over the platoon when his commander was killed. The recommendation for this award reads:

'For conspicuous gallantry and devotion to duty at DERNANCOURT S.W. of Albert on 5th April 1918 during heavy enemy attack, he took a Lewis Gun to a very exposed position where he could enfilade enemy at close quarters up to 30 yards. He maintained his gun until it was pierced by a bullet, then crawled 300 yards, got another gun and returned to his post in "No Man’s Land" where he was responsible for many dead. Later during our counter-attack he organized a platoon after the officer was killed and led them in the attack. He is absolutely fearless and his contempt of danger is amazing as right throughout his conduct has been of a similar high standard.’

After the war McDougall became an officer with the Tasmanian Forestry Department, and later, as inspector-in-charge of forests in north-east Tasmania, he performed outstanding work during bushfire periods. McDougall died in Scottsdale on 7 July 1968.

McDougall's Military Medal is preceded by the Victoria Cross and is accompanied by service medals for the First World War, and coronation medals for King George VI and Queen Elizabeth II.