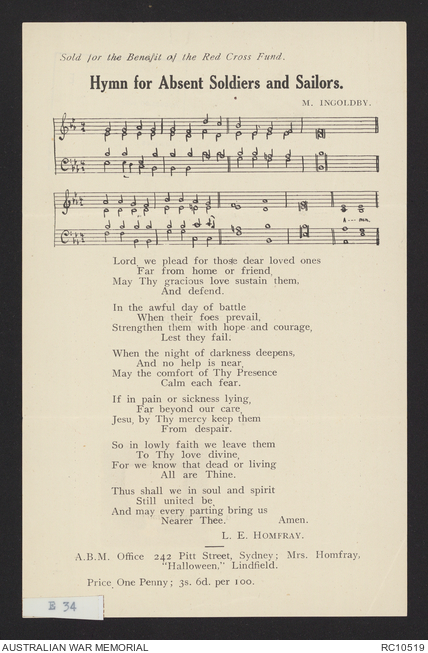 Sheet music for the song titled 'Hymn for absent soldiers and sailors', with lyrics written by Lucy Homfray and music composed by Maud Ingoldby. This is a single page score of a composition for voice and piano that was sold to raise money for the Red Cross Fund. It was published by the ABM Office in Sydney.

This piece was first advertised in Australian newspapers on 30 July 1915 when it appeared in The Southern Mail, Bowral, New South Wales. The review of the music reported that it was 'well worth the small sum of one penny' and 'the earnest words and simple, well-harmonised setting render the hymn well suited to singing in church or at any gathering at which our brave defenders are remembered in prayer.' At that time, approximately 3 000 copies had been sold.

Lucy Everett Homfray wrote several poems and verses during the First World War. During this period she also compiled booklets such as 'Voices of Anzac' and 'Somewhere in France' which were sold to raise money for the War Chest Fund. She lived in the Sydney suburb of Lindfield.