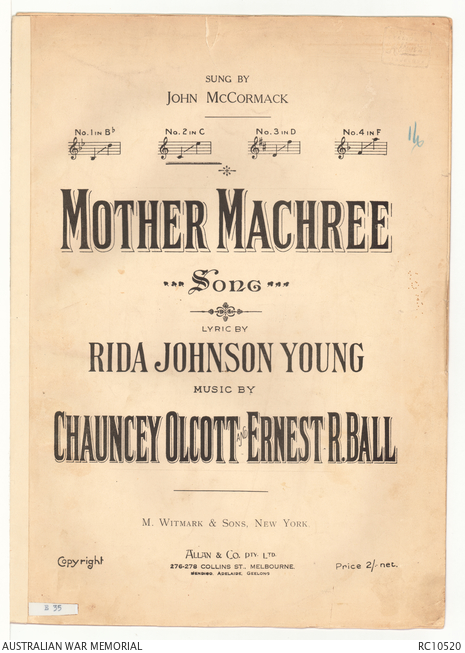 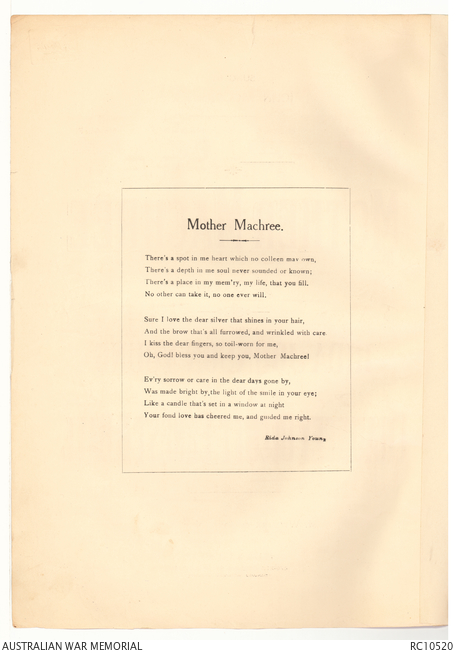 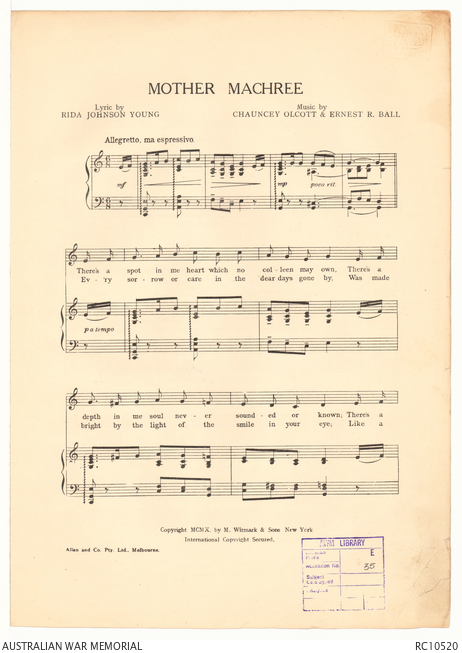 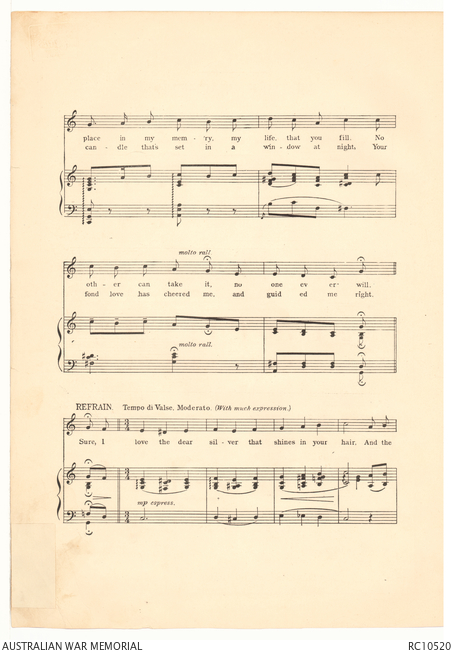 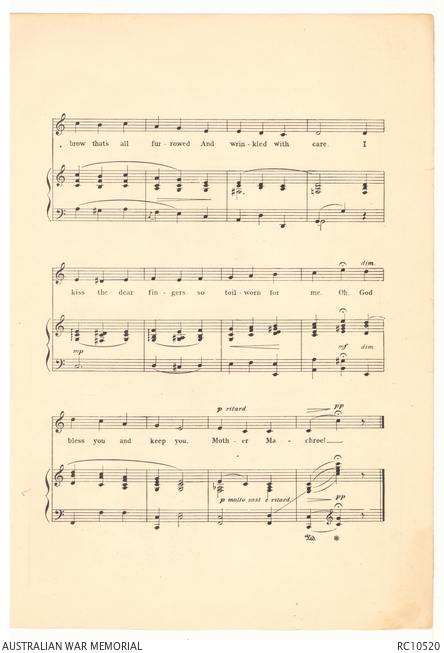 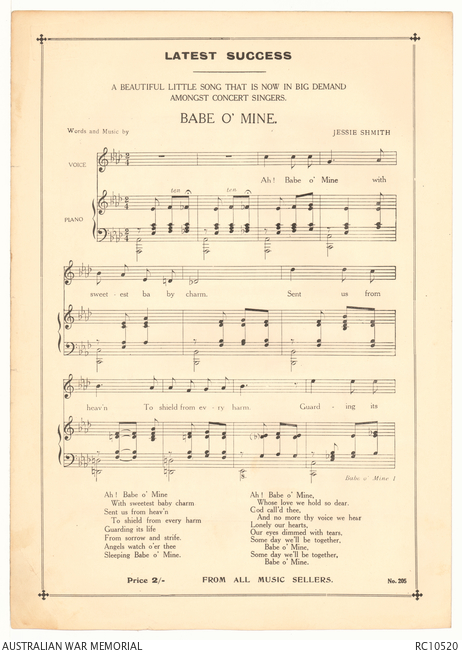 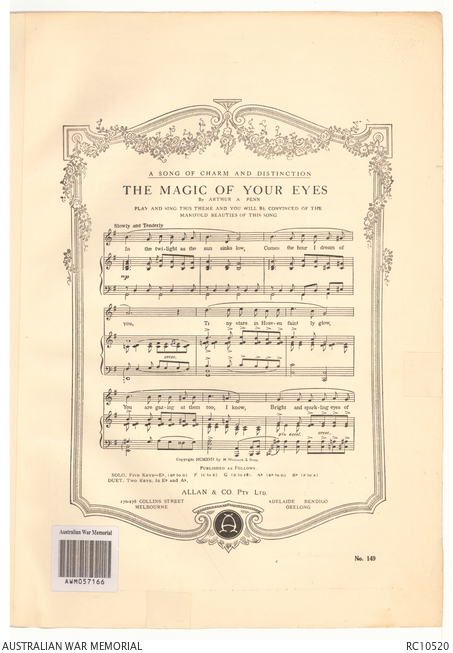 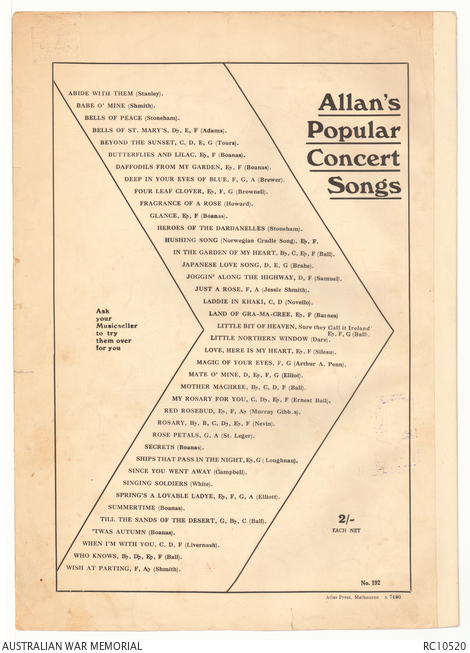 Sheet music for the song titled, 'Mother Machree' with lyrics written by Rida Johnson Young and music composed by Chauncey Olcott and Ernest R. Ball. The front cover advises that the song has previously been performed by John McCormack. This copy is number 2 of 4 and has been published in the key of C by Allan & Co, Melbourne. It was sold for 2/-.

The lyrics of this song discuss the fond memories that the writer has of Mother Machree and her love. Included in this copy are the first pages of songs titled, 'Babe o' mine' and 'The magic of your eyes'. These were intended as advertisements for purchasing the complete version of these songs.

In 1944, the Adelaide newspaper News, reported that the song recieved no interest until it was performed by the Irish tenor, John McCormack, who 'quickly sent it soaring to the top of song successes'. The same article also mentions that the song was written by Ball specially for Chauncey Olcott.

Ernest Ball was an American composer who also performed his own songs on vaudeville and became known for Irish ballads. He collaborated with several lyricists including Chauncey Olcott, George Graff and Rida Young. Some of the other works which these collaborations brought included 'When Irish Eyes are Smiling', written in 1912 and 'Till the Sands of the Desert Grow Cold'.

Chauncey Olcott was also an American singer and Broadway star whose life was portrayed in the 1947 movie 'My Wild Irish Rose'.

Rida Johnson Young was an American playwright, songwriter and librettist or the writer of text in operas. She wrote over thirty plays and musicals as well as over 500 songs.

The song titled 'Mother Machree', was published before the First World War and remained a very popular song during the war years. This song featured in concerts staged over the 1914-1918 period in the field and aboard troopships. One of these was a performance by Corporal H E Jenkins, a member of the Gustrow Bing Boys that took place at the Gustrow POW camp in Germany on 8 September 1918. The song was also popular on troopships with one performance by E Grimshaw, a member of the HMS Ben-My-Chree's Concert Party, aboard HMS Ben-My-Chree on 27 October 1916. Another onboard performance was given by Mr Clare Smith during a concert to commemorate crossing the line on HMAHS Kanowna, 17 July 1915. Sergeant John Stephen Mellish, also known as Jack, performed this song during a concert aboard HMAT Geelong on 11 December 1915. A concert party performance of this song was given by Corporal H F Williams, according to a concert program located within the papers of General John Monash. Williams performed this song at concerts with the Coo-ees Concert Party in France during the Christmas 1916 and New Year 1917 period.

This song was also popular at patriotic concerts in Australia during the First World War. It was performed to raise funds in close succession with concerts to raise funds for the Red Cross at Wellington, New South Wales on 28 August and also for the Lady Ferguson Appeal at Leongatha, Victoria on 27 August 1914. On 11 March 1915, it was performed at the Murchison Mechanics Institute, Victoria to raise money for the Belgian Relief Fund. The Belgian Relief Fund was also the beneficiary for a concert held in Barmedman, New South Wales on 24 March 1915 where it was performed by Maggie Dwyer.

It also appeared at farewell concerts for Australian soldiers who had enlisted for overseas service. Maggie Dwyer performed this song again, about 6 weeks after performing it at Barmedman, during a concert at West Wyalong, New South Wales, to farewell 1601 James Charles Philpot and 1608 Erroll Alexander Parker on 2 February 1915. Philpott embarked with the 3rd Battalion and Parker embarked with the 1st Battalion with both men departing from Sydney aboard HMAT Seang Choon on 11 February 1915. Almost a year later, the song was performed during a ceremony to farewell new AIF recruits at Boulder, Western Australia, on 23 January 1916.

After the First World War, this song remained popular with soldiers who had served with the AIF with an appearance of the lyrics in the songbook for a reunion of the 4th and 56th Battalions on an unspecified date.