[Sheet music] Australia is the Land for Me 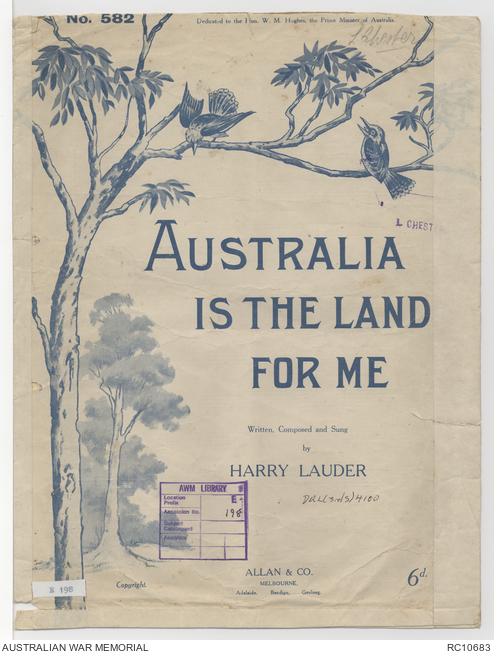 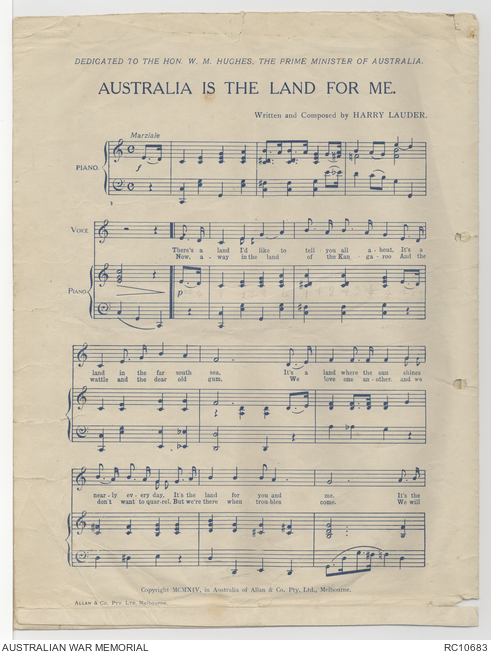 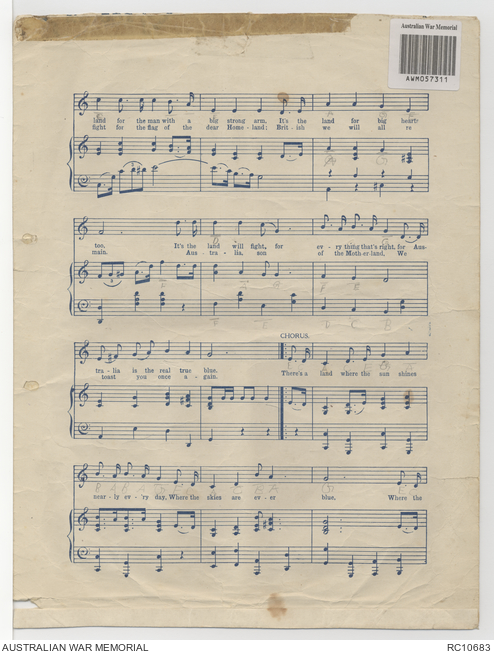 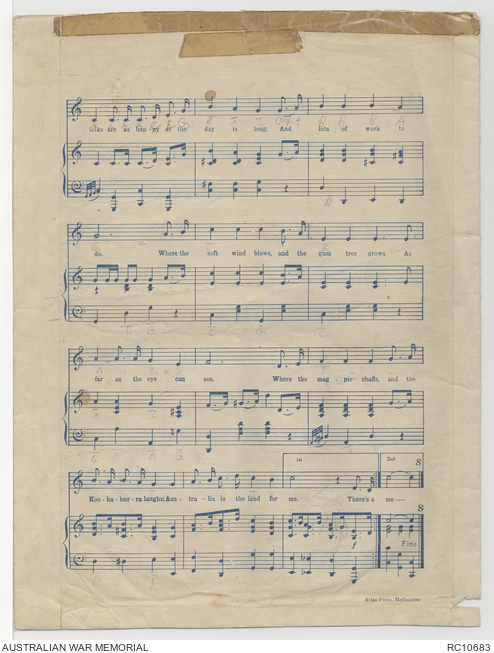 Sheet music for the song 'Australia is the Land for Me', written and composed by Scottish composer and comedian Harry Lauder. The song was published in 1914, and this copy was published by Allan & Co of Melbourne. The song was dedicated to the Hon. W.M. [Billy] Hughes, the Prime Minister of Australia.

The front cover features an illustration of eucalypt trees with kookaburras perched in them. The score has been annotated in pencil, writing letters below the corresponding notes. The lyrics for this song contain many references to Australian imagery with the narrator using these to explain why they believe the country is where they would like to be. This copy was published by Allan & Co, Melbourne, and printed by Atlas Press. The edges of the covers have been heavily reinforced.

There are discrepancies over when ‘Australia is the land for me’ was written and when it was first performed in Australia. The Register newspaper, Adelaide, claimed on 30 May 1919 that his first performance of the song in Australia was during his 1919 tour of Australia as it was written ‘at the end of his last season in the Commonwealth, when he was under the influence of lovely bush scenery in New South Wales.’ The report continued to say that ‘the song reveals, as only a Lauder song can, the comedian’s genuine regard for our gumtrees and blue Australian skies.’ Another report, in the Melbourne newspaper Table Talk dated 22 May 1919, confirms this saying that it was ‘composed just before Lauder’s return to England at the conclusion of his last Commonwealth tour.’ This article goes on to say that ‘it was written during a short holiday in some of the loveliest bush scenery of New South Wales, and the gleam of the sky and the scent of the gums brought Lauder’s fountain pen into play.’ According to this report, Lauder kept the song for his next tour of Australia. An article published in The Argus, on 6 August 1914, suggests the first performance of the song was during a concert by Lauder that evening at the King's Theatre, Melbourne. An article published by Warwick Examiner and Times on 15 March 1915 reports Lauder said 'I wrote a song about Australia, which I sang for the first time at Melbourne, and the people simply went wild over it.’ A schoolboy from Bunbury, Western Australia, had a description of Scotland published in The Riverine Grazier on 6 January 1914, which stated that Lauder was one of 'the best known exports from Scotland'. The other was whisky.

The sheet music for the song was announced as published on 28 October 1914 by the Birchip Advertiser and Watchem Sentinel who described it as Lauder’s “Australian song written for the Australian forces, dedicated to Andrew Fisher, entitled ‘Australia is the Land for Me’” and announced that it was ‘certain to become popular as it has that happy swing about it that suits the Australian.’ The Worker newspaper, Brisbane, published the chorus on 29 October 1914 and announced ‘it goes rippingly on the pianola’.

Sir Harry MacLennan Lauder was a Scottish music hall comedian who worked in a coal mine for ten years before joining a concert party and is regarded by some as the world's first superstar. He entertained troops during the two world wars and had a successful career as an entertainer that extended for over thirty years. He visited Australia for his first tour in April 1914 and again in 1919. Of the event of becoming a professional performer, an article in the Goulburn Penny Post reported he said 'Didn't I rejoice to hear the birds in the morning, and realise that I didn't have to go underground away from them and the scented heather?' The Age newspaper in Melbourne reported that his 1914 tour of Australia would be 'the most memorable event in the theatrical history of the country'.