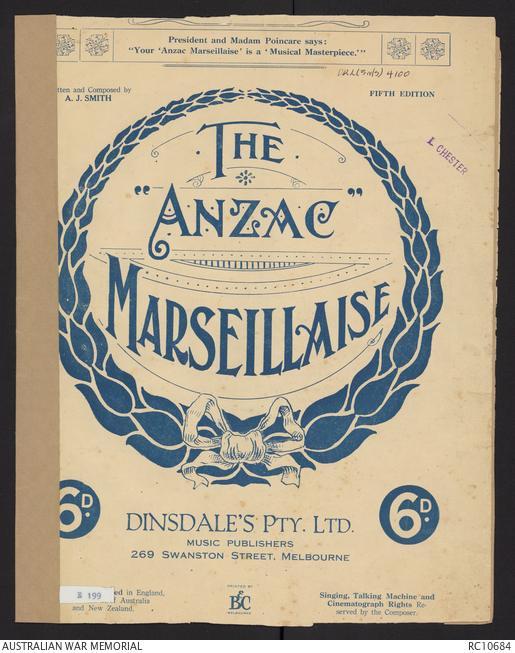 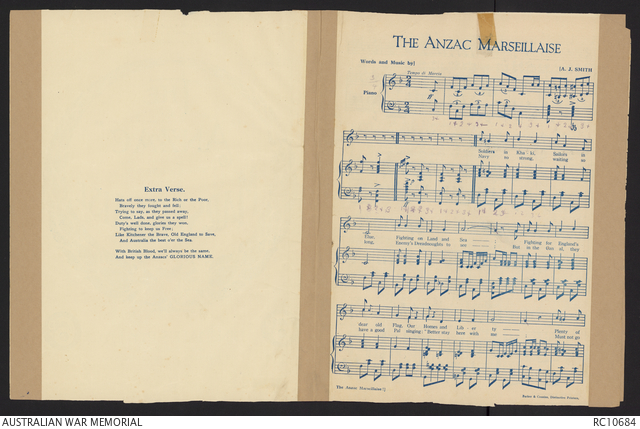 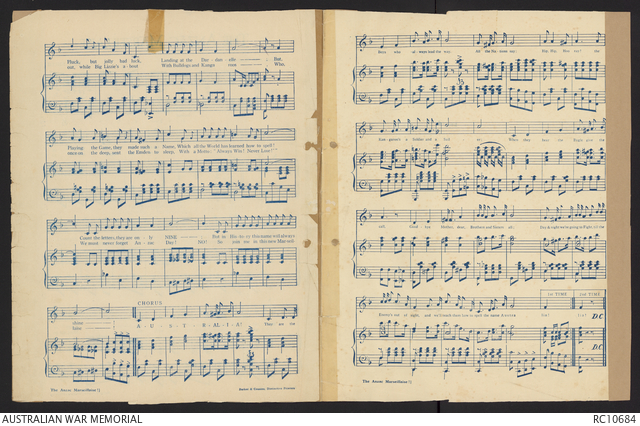 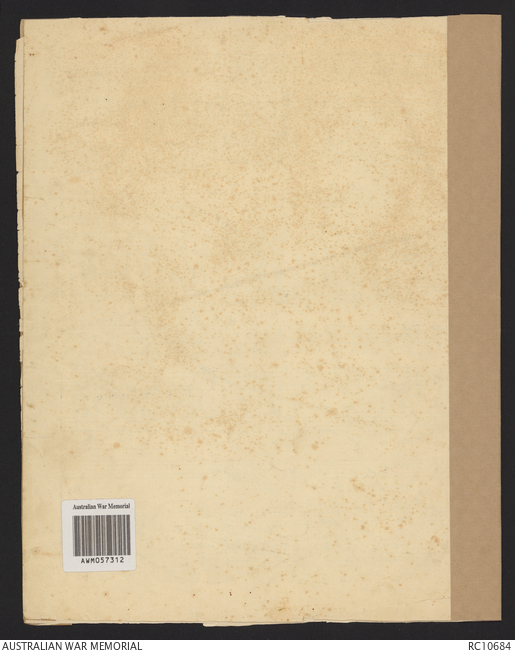 Sheet music for the song titled, 'The Anzac Marseillaise', written and composed by Albert James Smith. Smith was a 44 year old grocer from Brighton, Victoria. This is a copy of the fifth edition of 'The Anzac Marseillaise' that was published by Dinsdale's Pty Ltd in Melbourne. It was printed by Barker & Cousins, Melbourne. The lyrics of this song discuss fighting for England at Gallipoli and teaching the world how to spell Australia.

The third edition of this song was being printed in June 1916, with one music publisher reporting that it was 'the finest patriotic song and march ever handled by them'. Mr G Oppenheim was reported to have completed the band parts for this song by 3 June 1916. Around the same time, Smith was visiting military camps to introduce the song. The lyrics of this song discuss fighting for England at Gallipoli and teaching the world how to spell Australia.

After this song was written, Private Albert James Smith enlisted in the Australian Imperial Force and served with the 12th Field Ambulance during the First World War. The publication of the song was announced in the Brighton Southern Cross newspaper on 12 August 1916. Smith subsequently wrote other songs, one of which was published with praise for 'The Anzac Marseillaise' by the French president: 'the President and Madame Poincare begged to congratulate Mr Smith for his Musical Masterpiece, and much appreciated his good feelings and demonstrations of sympathy towards the French Nation.'

On the home front, the song titled 'The Anzac Marseillaise' was very popular, with many performances occurring at school concerts. Surrey Hills State School, Victoria, was one of the schools to perform this song to raise money for the British Red Cross on 7 June 1917. This occurred six months after the Director of Education, Mr Frank Tate, declared that the song had not been approved for use in schools and that there was 'not the slightest chance' of this happening.

The State Recruiting Committee of South Australia published the lyrics for this song in a booklet titled 'Join in the Singing', which contained songs performed by Will Lansdowne at a concert during the First World War. Lansdowne was supported at the concert by the choirs of the John Martin, James Marshall, Charles Birks, Donaldsons and Miller Anderson department stores.

The song was also popular at concerts welcoming home returned soldiers. One of the earliest of these was at Warrandyte, Victoria, on 9 October 1916 in honour of Gunner A A Bell; Lance Corporal C B Hampton; and Private G Watson. More concerts followed the end of the war including one at Bowenvale, Victoria, in December 1918, for Sergeant Antonio Caligari who served with the 60th Battalion. Another performance of the song took place to welcome home returned soldiers at the Soldiers' Rest Home in Cairns, Queensland, on Tuesday 6 May 1919. Some of those in attendance included 1347 Corporal Ernest Murray Tate (2nd Light Horse); 225 Sergeant Reginald Arthur Beazley (5th Light Horse); 432Corporal Robert John Dunsford (5th Machine Gun Battalion); Signaller H C Richards; and Signaller C Smythe.

Another performance of the song occurred at KalgooRlie, Western Australia, on 27 February 1917. This performance was by Sergeant Brooks who had been a member of the Anzac Concert Party and served at Gallipoli. This concert was mentioned in several newspapers at the time.