"Show your pass." "An Australian cockatoo owned by Mrs A Bon of Bonnie Doon (Vic) that became a ... 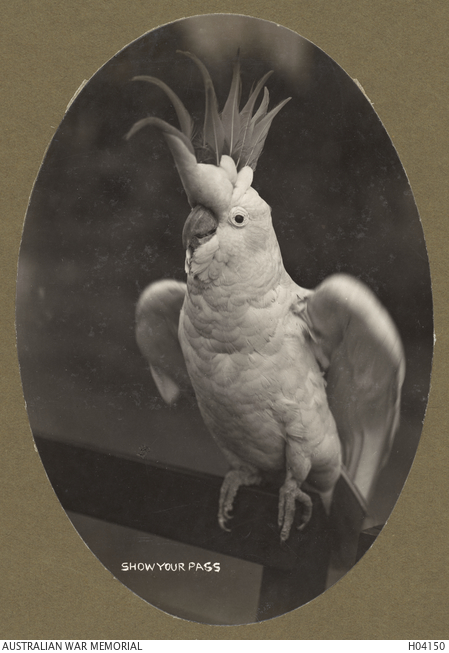 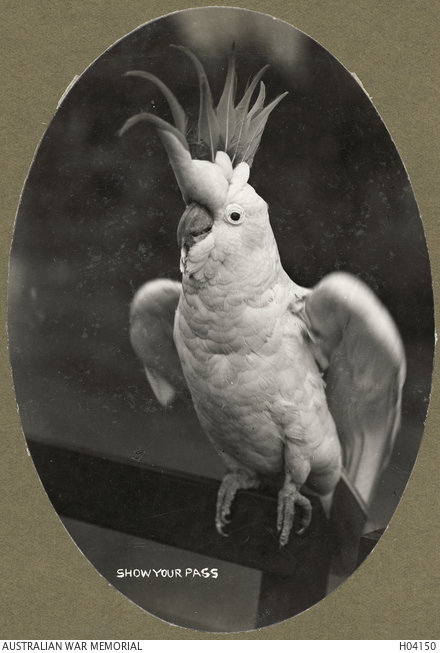 "Show your pass." "An Australian cockatoo owned by Mrs A Bon of Bonnie Doon (Vic) that became a great favourite with the staff & patients at No. 1 Rest Home, Melbourne, where he spent two or three years during the War. The bird was a good talker, it's favourite expressions being 'Show your pass' and 'Go on, you're a German', both obvioulsy taught to it by digger comrades." 'Cocky' was hatched at 'Wappan', near Bonnie Doon, Victoria, in 1878. He already had an extensive vocabulary of 'polite' English phrases, when he was lent by to the home by Mrs Anne Bon in late 1917. The home housed wounded convalescent returned soldiers, who were undergoing rehabilitation and retraining before being discharged. Cocky was lent to the home to cheer up the men and was the mascot of one of the wings of the house. Cocky, coached by the soldiers, rapidly acquired the ability to speak more 'picturesque' phrases, as well as some German words. Cocky was not allowed into chapel, but disrupted services by screeching from his perch outside the door. On one occasion he was accidentally locked inside the hall, which was used for concerts and church services and spent the time shredding the hymn and prayer books, which only increased his popularity with the soldiers. He was usually surrounded by an admiring crowd. He was returned to Mrs Bon after one of the men trained him to ride on his shoulder and took him for long walks, and it was feared that the bird might fly off and be lost. Mrs Bon then passed Cocky to her grandson, David, who had two young daughters, Merryn and Collis, who were living at Cromwell Street, Caulfield. Cocky lived on the verandah of the house and terrorised the youngest girl, Merryn, then aged three. Despite this Mrs Bon insisted that the bird remain with the family when they moved to another house in Caulfield, in Rowena Street. When Cocky died there in 1925, aged 47 and a half, Mrs Bon sent a driver to collect the body, which was placed in box lined with blue padded silk and conveyed to a taxidermist from the Museum of Victoria, who mounted his skin for display at the Australian War Museum. See also RELAWM08024, P09491.001 and P11660.001.