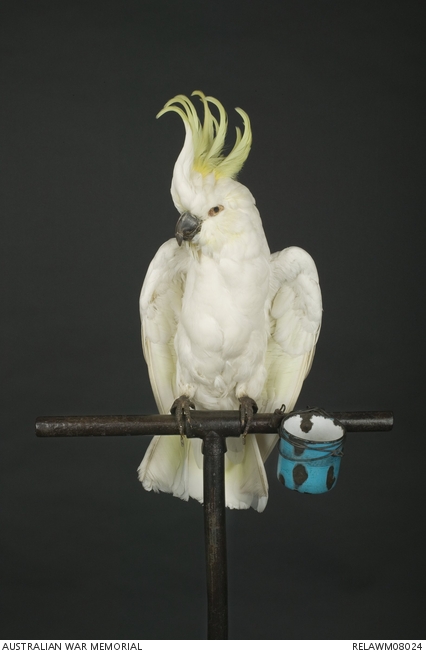 Mounted skin of 'Cocky', a white sulphur crested cockatoo (Cacatua galerita), with an erect crest, shown perched on a stand. The black painted iron stand is in the form of a cross bar, attached to a single upright. The upright slots over a four footed iron stand. A chipped blue and white enamelled cup is fitted to the cross bar for the bird's food.

'Cocky' was hatched at 'Wappan', near Bonnie Doon, Victoria, in 1878. He already had an extensive vocabulary of 'polite' English phrases, when he was lent by his owner, Mrs Anne Fraser Bon, to No. 1 Rest Home at Wirth's Park in Melbourne in late 1917. The home housed wounded convalescent returned soldiers, who were undergoing rehabilitation and retraining before being discharged. Cocky was lent to the home by Mrs Bon to cheer the men up and was the mascot of one of the wings of the house. A 'most wicked yet fascinating' magpie called Josephine was the mascot of the other wing.

Cocky, coached by the soldiers, rapidly acquired the ability to speak more 'picturesque' phrases, as well as some German words. Nurses, who had worked at Wirth's Park, were contacted in the 1920s but refused, out of delicacy, to repeat what Cocky had said. They did recall two of his less colourful phrases. One was 'Show your pass!' spoken to men going on day leave. Newcomers to the home were often fooled and as they looked in their pockets for their pass Cocky would jump up and down on his perch. Men that teased the bird were told 'Go on, you're a German!'.

Cocky was not allowed into chapel, but disrupted services by screeching from his perch outside the door. On one occasion he was accidentally locked inside the hall, which was used for concerts and church services and spent the time shredding the hymn and prayer books, which only increased his popularity with the Diggers. He was usually surrounded by an admiring crowd and as one nurse said 'gave much pleasure to many a sick man'. Cocky was returned to Mrs Bon after one of the men trained him to ride on his shoulder and took him for long walks, and it was feared that the bird might fly off and be lost.

Mrs Bon then passed Cocky to her grandson, David, who had two young daughters, Merryn and Collis, who were living at Cromwell Street, Caulfield. Cocky lived on the verandah of the house and terrorised the youngest girl, Merryn, then aged three. Despite this Mrs Bon insisted that the bird remain with the family when they moved to another house in Caulfield, in Rowena Street. When Cocky died there in 1925, aged 47 and a half, Mrs Bon sent a driver to collect the body, which was placed in box lined with blue padded silk and conveyed to a taxidermist from the Museum of Victoria, who mounted his skin for display at the Australian War Museum.

Anne Fraser Dougall was born in Scotland in 1838. In 1858 she married John Bon, thirty three years her senior, who was a wealthy pastoralist near Mansfield in Victoria. After his death, 10 years later, she took over the management of 'Wappan', in addition to raising her five children, and eventually became one of the wealthiest women in Victoria. She was a noted philanthropist, with a keen interest in aboriginal welfare, various charities, the Salvation Army and mental health. During the First World War she donated an ambulance to the Belgian Army, as well as lending Cocky to the Rest Home. Each Christmas, from 1919 until her death in 1936, she gave every Victorian soldier who had been blinded in the war a gift of twenty pounds.