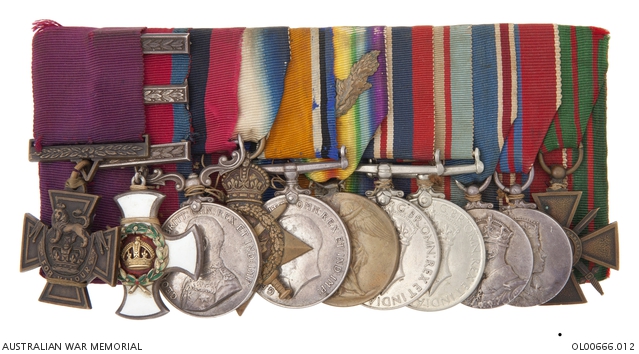 Henry William 'Harry' Murray holds a unique place in the history of the AIF. This French Croix de Guerre was awarded to Murray in January 1919 for his conduct as commander of the 4th Machine Gun Battalion in 1918. This was one of many decorations that Murray received for his service in the AIF. During the course of the war he also received the Victoria Cross, the Distinguished Service Order (DSO) (twice), the Distinguished Conduct Medal (DCM), appointed a Companion of the Order of St Michael and St George and was Mentioned in Despatches four times. The recommendation for the Croix de Guerre reads:

'During the periods 24 Ap to 23rd May & 2nd to 7th August, 1918, this officer commanded the 4th Aust. Machine Gun Battn with conspicuous skill & ability. His duties continually necessitated his being under heavy fire & in close co-operation with our French Allies. His work has [illegible] been marked by gallantry, skill & good judgement.'

Murray was born at Evandale, Tasmania on 1 December 1880 and was working in Western Australia when he enlisted in the 16th Battalion as private soldier 315. Later commissioned in the 13th Battalion, by the end of the war he commanded the 4th Machine Gun Battalion and was more highly decorated than any other AIF soldier.

He settled in Queensland on his return to Australia and during the Second World War commanded the 26th Battalion and later the local Volunteer Defence Corps. Murray died in the Miles District Hospital on 7 January 1966.

Murray's Croix de Guerre is preceded by the Victoria Cross, the DSO and Bar, the DCM, service medals for the First and Second World Wars and coronation medals for King George VI and Queen Elizabeth II. The medals are on loan from the direct descendants of Harry Murray.