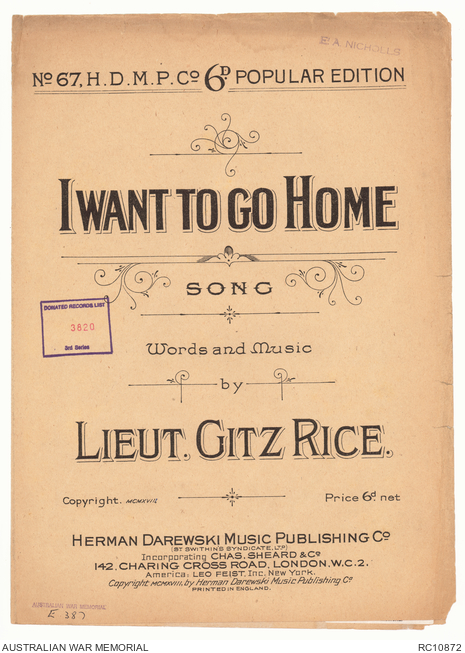 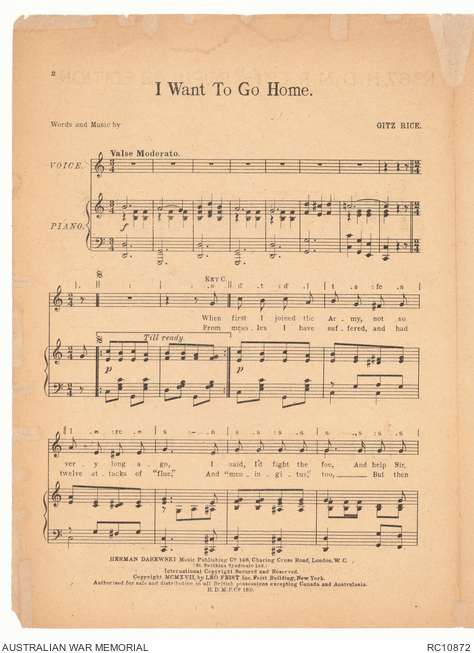 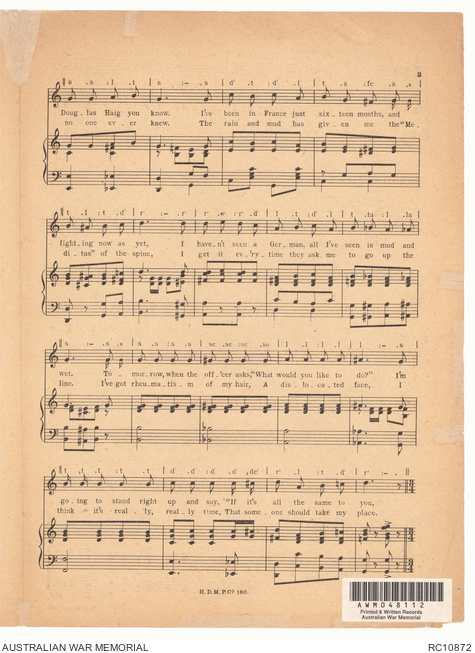 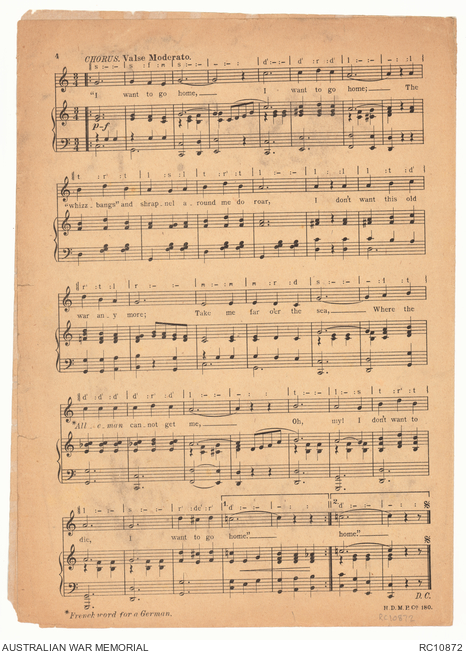 Sheet music for the song titled 'I want to go home', with music and lyrics written by Lieutenant Gitz Ingraham Rice. This copy of the sheet music is the 6d (six pence) popular edition that was published by Herman Darewski Music Publishing Company in 1918.

The song is written from the point of view of a soldier who has had enough of the war and wants to go home. The lyrics describe his experiences, recalling illnesses, shelling and dealings with the mud and bad weather.

This copy of the music originally belonged to Private Ernest Alfred Nicholls and features his name stamped in the top right-hand corner of the front cover. It is part of a collection of sheet music that was donated to the Memorial in 1971, and is symbolic of the concerts, theatre and other musical performances that Australian soldiers took in whilst on leave in London during the First World War.

Gitz Rice was a Canadian singer, entertainer, songwriter and pianist who served as a gunnery officer with the First Canadian Contingent before joining a comedy troupe attached to Princess Patricia’s Canadian Light Infantry.

The song titled 'I want to go home' began appearing in Australian newspapers from January 1918. The piece was often referred to in articles about songs that soldiers sung at welcome home events and post-war reunions.

In many newspaper articles, the song is often associated with British soldiers. Indeed, according to The World's News, Sydney, it was considered one of their most 'famous...humorous dirges'. One of the stories associated with this song is explored by John Mullen in the book 'The show must go on', in which he reveals there were attempts to ban the singing of this song in the trenches after German newspapers published a translation of the lyrics of this song. In contrast, some Australian newspaper articles that referenced the song, such as one published by The Daily Mail in Brisbane, dismissed any suggestion that the soldiers believed 'the nonsense they sing on the march'.

Although 'I want to go home' was marked as a popular song with the soldiers, it did not rate many mentions for performances at concerts during the war years. It was performed by returned soldiers during a welcome home ceremony for every soldier who served in each of the districts that made up the Violet Town shire in Victoria on 14 November 1919. According to a report in the Euroa Advertiser the song was met with applause, laughter and an encore.
The song remained popular with returned soldiers following the First World War. An excerpt from ‘The History of the 51st Battalion’ stated the idea of spending a winter on the Somme was 'summed up in the words of the popular song', a comment which was followed by the lyrics of the chorus. This song was also popular at post-war reunions for returned service personnel. One of these was at an event organised by the Gordonvale branch of the Returned Soldiers and Sailors Imperial Association (RSSILA) in Queensland on 7 July 1928. It was performed by Mr. Humphreys and described as 'the digger's song'. The song was also performed at a reunion of the Bowral RSSILA sub-branch on 8 May 1929, together with many other songs that resonated with soldiers during the First World War.

The song also appeared in radio shows during the 1930s. One such example was on the radio station 4QG where it was played at 8pm as part of the Diggers' community song concert at the Anzac Club on 21 July 1931.