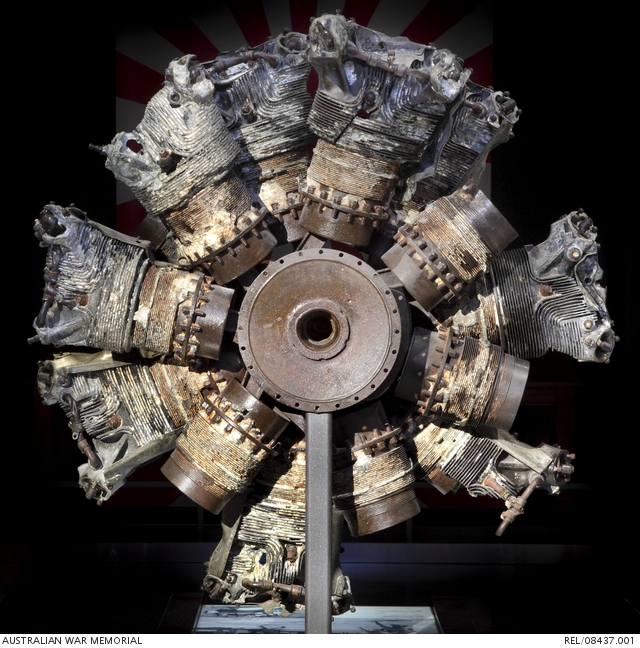 Corroded metallic remains of the port (left side) Pratt and Whitney Twin Wasp Aero Engine. The engine is heavily concreted from its long immersion underwater, and is missing a number of its cylinder heads. This engine is a fourteen cylinder, air cooled radial, R-1830-S3C4-G (Note: engine card states this model is R-1830-45). This engine is from the wreck of a Royal Australian Air Force (RAAF) Lockheed Hudson, A16-19. A16-19 was the first Australian aircraft lost in the Pacific theatre.

Contrary to popular myth, the Pacific war did not start with the massive surprise attack by the Japanese on Pearl Harbour in Hawaii early on the morning of 7 December 1941 (8 December 1941 over the International Date Line).

The very first large scale action between the Imperial Japanese and the Western Allies occurred on the north east coast of Malaya (now Malaysia) at Kota Bharu, an hour before the Japanese struck Hawaii.

This American built engine is from the wreck of Lockheed Hudson A16-19, which was the first Australian aircraft lost in this first battle in the Pacific theatre. Coded 'US-B' this Hudson had been serving in Singapore and Malaya with No. 1 Squadron, RAAF from mid-1941. A photograph of this aircraft and likely this very engine fitted, can be seen in AWM image 006647.

A16-19 and her crew were defending Malaya from a sea-borne invasion by the Japanese when they were shot down. The aircraft crashed off shore killing all the crew apart from the co-pilot. This engine was recovered from the sea in 1976, by a local fisherman, Mr Abdul Rahman Bin Win Harum.

Flying Officer Dowie was thrown through the roof of the crashed Hudson, and survived with a fractured spine. He was taken prisoner after two days adrift on a small local Malayan boat which he had found. He was sent to Singora (Thailand) followed by Saigon where he was interrogated by the infamous Kempei tai secret police. He was transported to Singapore before being blindfolded and literally thrown off the back of a truck at Changi prisoner of war camp by his captors. His back had still not been properly treated by medical staff.

Dowie became part of 'H' Force, an all Officer group of Allied prisoners who were sent to the southern end of the Burma-Thailand death railway in May 1943. Along with his fellow prisoners and locals also being used as slave labour by the Japanese, he suffered great physical and emotional stress. Brutally tortured, under-fed, over-worked and suffering from many diseases and tropical illnesses few survived this horrific ordeal.

Upon completion of the railway Dowie with the few survivors of 'H' Force, was returned to Singapore in October 1943. He was repatriated back to Australia in late 1945, the following year he left the RAAF and he studied medicine eventually becoming the Director of Medical Services with the Department of Social Services in South Australia. He and his wife Cynthia resided in Willunga in South Australia and in 2003 he visited the Memorial to personally inspect both of the engines from his aircraft which were on display.

The remainder of the crew, having no known graves, are commemorated at Kranji Cemetery, Singapore. Other items in the collection that relate to this aircraft are REL/08437.002, the port engine exhaust shrouds and REL/08438.001 & .002, the starboard engine. This latter relic is on display in Aircraft Hall of the Australian War Memorial.

The US designed and made Lockheed Hudson was the first non-British aircraft adopted for use by the RAAF. This fact was very controversial at the time. It was the most sophisticated and combat capable aircraft in use by the RAAF at the start of the Second World War. The Hudson saw heavy use in Australian service in a diverse range of roles in both the Pacific and North African/Mediterranean theatres. From bombing to reconnaissance, air-sea rescue, transport and liaison, the Hudson was one of the true 'work horses' of the RAAF.

This highly significant relic is a reminder that the first shots of the Pacific war were not fired at Pearl Harbour, Hawaii, but thousands of miles away, over and around the north eastern coastline of Malaya.