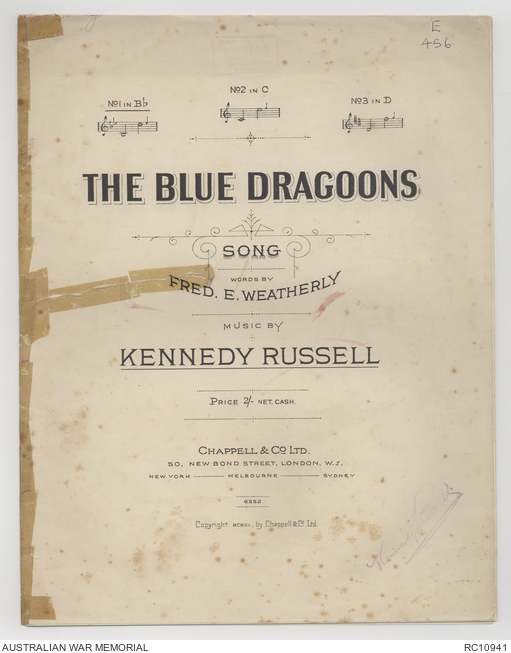 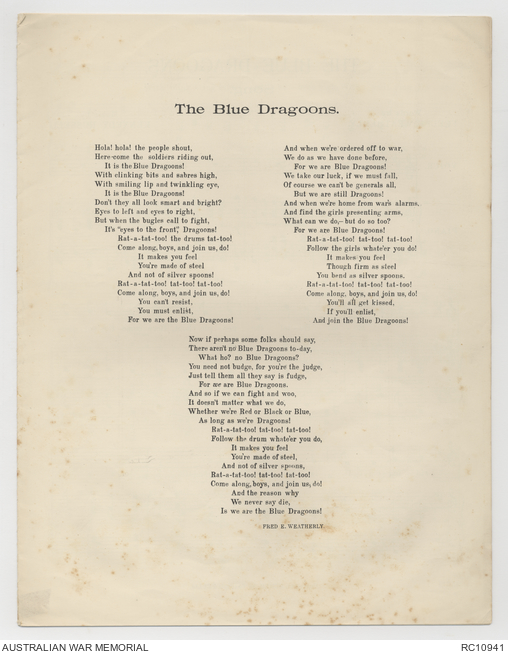 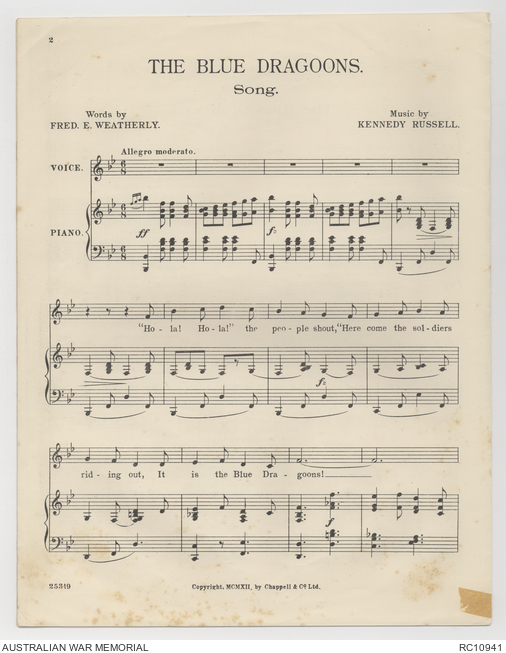 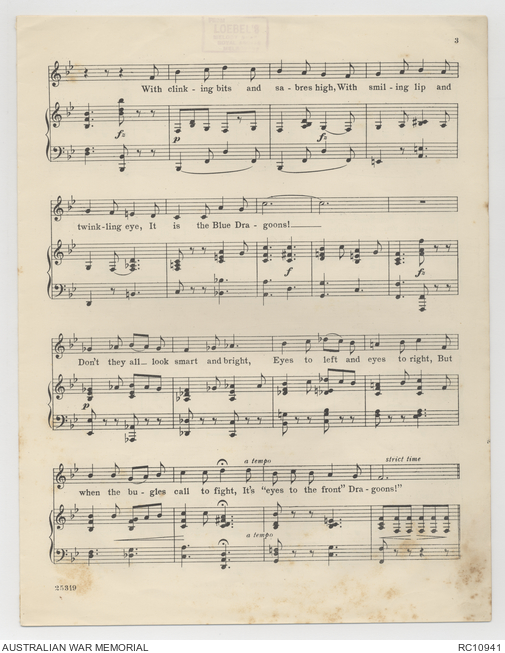 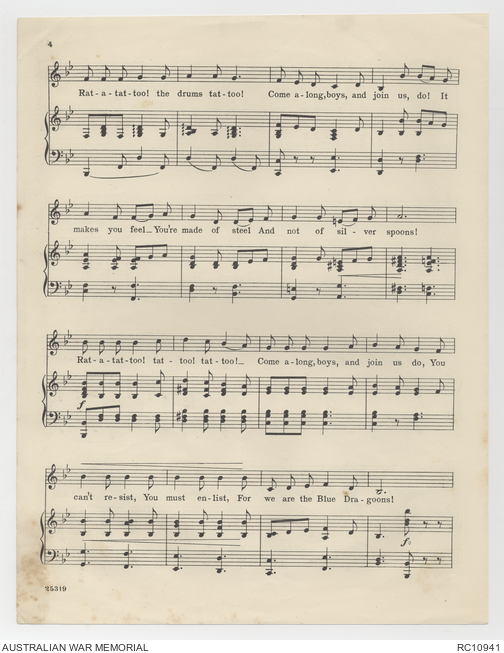 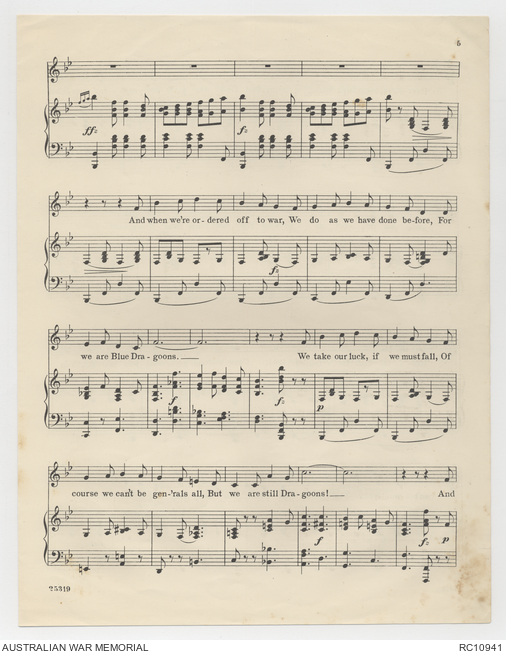 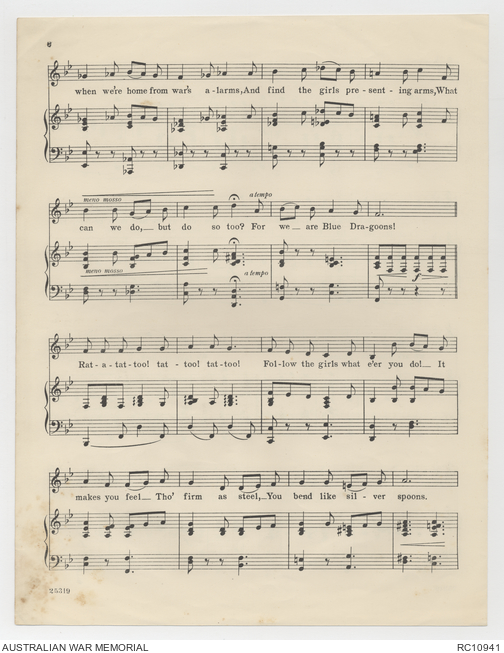 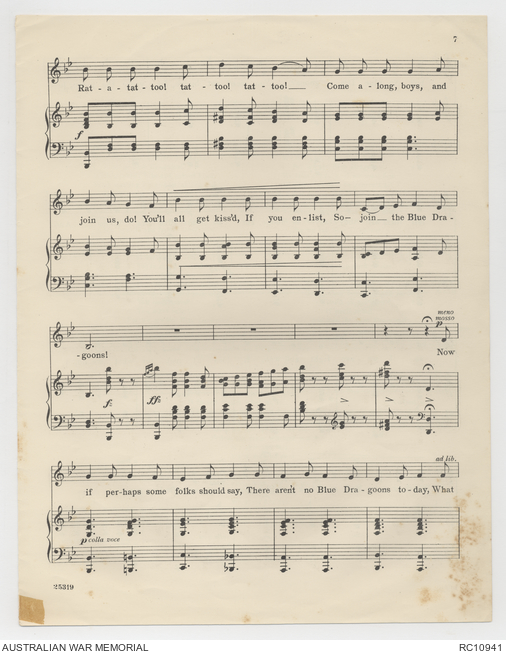 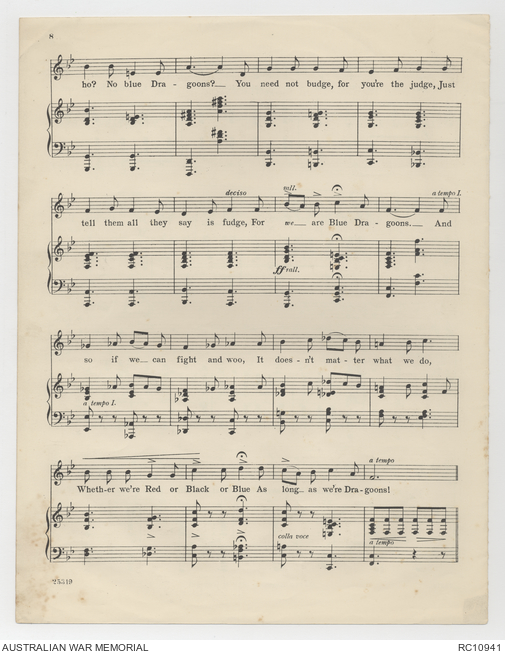 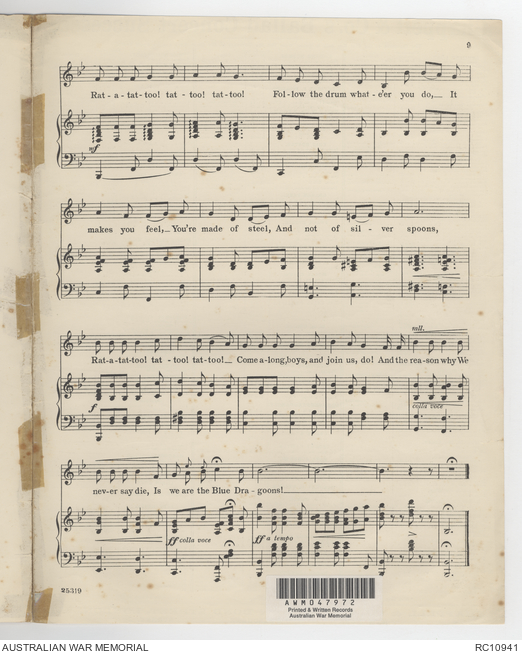 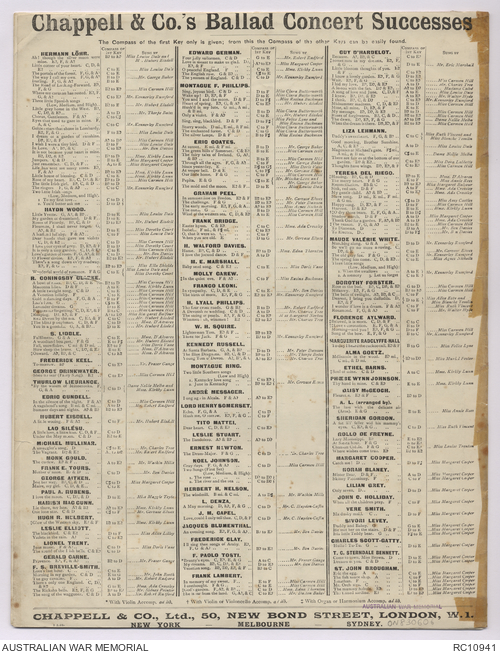 Sheet music for the song titled 'The Blue Dragoons', with lyrics written by Frederic Edward Weatherly and music composed by Kennedy Russell. This song was written in 1911, with this copy of the sheet music published about 1912. The front cover features the signature of the composer. Inside the front cover are the typed lyrics for the song in full and an advertising preview of the song titled 'A Devonshire Wedding', written by H Lyall Phillips. The back cover features a list of the titles published by music publisher, Chappell & Co, that were regarded as 'ballad concert successes'.

Carman writes that from the early 18th century, dragoons were trained for combat with swords from horseback. Prior to this, they were a type of mounted infantry who travelled on horses but fought as conventional infantry soldiers. The lyrics of this song describe the former, with its description of soldiers with sabres on horseback, and encourages men to join in order to prove that they aren't made of silver spoons and to be rewarded with kisses.

In addition to being a proliferate lyricist who is said to have written the lyrics for 3000 songs, Weatherly was also an author and a lawyer. Some of his most famous songs include 'The Holy City', 'Danny Boy' and 'Roses of Picardy'.

Russell Kennedy was born Robert Charles Kennedy in London, England. He was a pianist and conductor, including opera and theatre, who also performed the piano accompaniment at concerts in London.

The song titled 'The Blue Dragoons', was a popular song with Australian service personnel during the First World War period. This song featured in a performance aboard HMAT Wiltshire during a voyage back to Australia on 9 March 1918. The concert was organised by the
Cubs of Neptune with the featured performance of this song given by F W Palmer. It was also performed in a concert at a prisoner of war camp in Germany on Newbrandenburg. This performance was given by the theatrical society of the Officer's Prison Camp.

The popularity of this song with service personnel continued after the war. The entertainment group known as 'The Digger Pierrots' performed this song as part of the program during a concert at the Theatre Royal, Sydney, on 15 May 1920.

This was a popular song in Australia during the First World War with professional performers, who also served in the Australian Imperial Force, including it as part of their repoirtoire. This song was performed by Mr Peter Dawson at the Lyric Theatre, Bendigo, on 21 August 1914. It was one of the songs that was performed as a result of requests for encores to the songs mentioned on the program. This was repeated at Casterton, Victoria, a couple of days later when Dawson performed the same song as an encore on 25 August 1914. Private Robert Murdoch Pearce, known as Bobby, performed two songs at the Tivoli Theatre, Sydney, on 20 November 1915, after returning from active service at Gallipoli. He performed ‘Boys of the Old Brigade’ followed by ‘The Blue Dragoons’ with reports of his performance in the Sunday Times, stating ‘the songs were delivered in a pleasant, light baritone, with good feeling and expression. The new meaning given to the words and music by a man who had been through grim realities touched the audience’.

This was a popular song performed by civilian concert parties and entertainment groups during the First World War period with some of these organised for fundraising purposes. It was performed by the Mildura Dandies during a concert at the Mildura Town Hall on 8 October 1914. The concert was organised to raise money in order to purchase an electric organ-blower for St Margaret’s Church with this song performed during the event by Mr H B Watmuff. Mr R A Bartleman received an encore for his performance of this song during a concert organised by A D Cree’s concert party held at the Launceston Mechanic’s Institute on 3 December 1914. He repeated this performance during a concert by the group at Colac, Victoria, on 19 January 1915. A D Cree was a Scottish comedian who performed with a group of other entertainers. The entertainers known as The Green Dandies provided an evening of entertainment to raise money for the Red Cross at Corryong, Victoria, on 24 July 1915. During the concert, ‘The Blue Dragoons’ was performed by a chorus. The Merry Magpies performed for two nights at Broken Hill between 11 and 12 September 1916. During their concerts, the song ‘The Blue Dragoons’ was performed by Mr Fred Corin. Proceeds from the evenings were to be donated to the district nursing association and the appeal for the building of the Soldier’s Memorial Club.

Other fundraising events where this song was performed were also organised for the Red Cross and the Belgium Relief Fund. Mr D P Lucadou-Wells performed this song at an event held at Stanley, Tasmania to recognise the raising of a local branch of the Red Cross Society during late August 1914. Mr E Seale performed this song together with several others at a concert for the Belgian Relief Fund held at Launceston, Tasmania, during September 1914. A concert was held at Whitfield, Victoria, on 19 April 1915 to raise funds for the Belgian Relief Fund and the Red Cross. The concert was reported in the Wangaratta Chronicle as ‘one of the most successful concerts ever held in Whitfield’. This song was performed by Mr Dungey who received an encore for his performance and followed it with ‘The Gay Drum Major’. A concert was organised by the Commercial Travellers’ Association to raise money for the Belgian Relief Fund. The Concert was held in the Exhibition Building, Adelaide, on 5 June 1915. The Tramways Military Band, under bandmaster Christopher Smith, were charged with the entertainment during the first part of the concert. The second part featured performances from well-known performers including Mr F E Pascoe, who performed The Blue Dragoons. The final act of the evening featured performances by the travellers themselves. F E Pascoe performed ‘The Blue Dragoons’ at another concert to raise money for the Red Cross on 8 July 1915 at Glencoe, South Australia. A concert was organised to raise funds for wounded soldiers on 26 June 1915 at Whycheproof, Victoria. The concert raised in excess of 23 pounds and featured a performance of ‘The Blue Dragoons’ by Mr N Hercules who followed it with an encore performance of ‘I know a lovely garden’.

This song was also popular at farewell events organised for local residents who enlisted in the Australian Imperial Force. The second song performed during an event to farewell four local men who had enlisted from Kooroocheang, Victoria, was ‘The Blue Dragoons’. It was performed during the event held at the Kooroocheang School on 11 March 1915 by Mr Tom Sewell. The fifth farewell to locals who enlisted in the AIF was held at Kapunda, South Australia, on 6 May 1915 with a procession down the main street that included 22 soldiers ‘most of them having association with the town’, according to The Kapunda Herald. During the concert that followed, ‘The Blue Dragoons’ was performed by Mr R H Ayliffe who received an encore for his rendition and followed it up with ‘The little grey home in the west’. A farewell for five locals who had enlisted in the AIF was reported by the Stratford Sentinel and Briagolong Express, Victoria, on 21 June 1915. During the concert that featured as part of the occasion, the song ‘The Blue Dragoons’ was performed by Mr R Swan. Six locals from Homeville and Telarah, New South Wales, were farewelled with a concert on 4 November 1915. ‘The Blue Dragoons’ was performed during the musical entertainment by Mr Wade, who was encored and returned with the song ‘In the ranks of the firing line’.