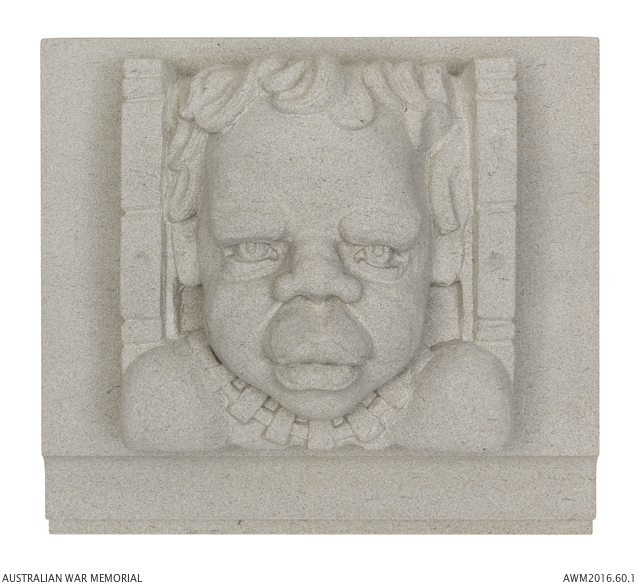 This architectural ‘boss’ or carved stone figure depicts the face of an Aboriginal woman. Along with its male counterpart, it is situated in the Commemorative Courtyard of the Australian War Memorial. In 1940-41, Mr. W. Swan, stonemason, carved the original to this piece as a gargoyle from a plaster model created by sculptor William Leslie Bowles (see ART93053). Unfortunately, the drainage points in the original series of carved stone figures did not function properly, and leaking meant the sandstone saturated. This, along with exposure to the weather, resulted in deterioration of the stone, which cracked and broke away. The condition of the gargoyles and surrounding stone work was closely monitored from 1990, and in 2014 it was decided that replacement pieces were necessary. The original sculptures were removed from the Commemorative Courtyard and the new pieces were installed as replacements.

Before beginning the reconstruction project, the Memorial undertook national consultation regarding the process with Memorial staff, heritage practitioners and Aboriginal and Torres Strait Islander stakeholders in the local community and current and former serving Indigenous Defence personnel, the decision was made to re-carve the Aboriginal figures in their original likeness whilst removing their functionality as gargoyles. This decision was made to be more respectful regarding their depiction and their inclusion in the redevelopment preserved the Memorial’s original heritage design.

Research for the Memorial in 2016 concluded that Bowles had most likely based this female carved head on an image or images of Tasmanian Aboriginal woman, Truganini, who was probably the best known and most frequently depicted Aboriginal woman in Australia at the time. The BenjaminTr Law bust of Truganini of 1836 along with several later photographs of Truganini as an older woman bare a very strong resemblance to his carved female head.

Once the new carved figures were installed in the Commemorative Area, a smoking ceremony was held on 29 March 2017 to welcome them into the space.