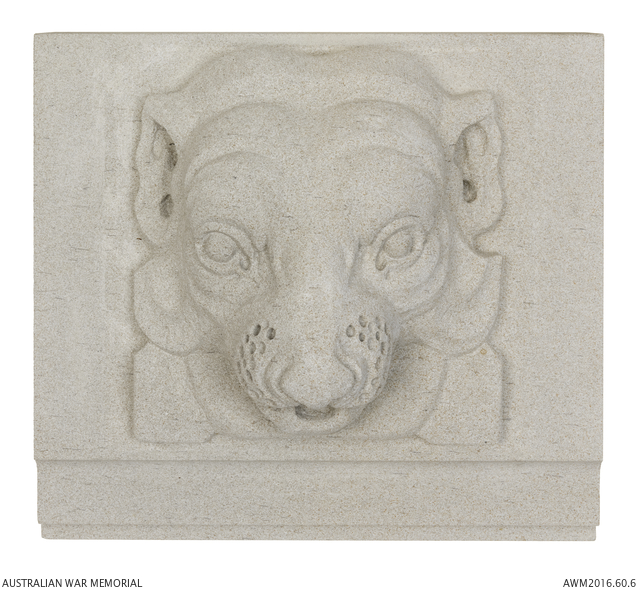 This gargoyle depicts the face of a Tasmanian Devil and is situated in the Commemorative Courtyard of the Australian War Memorial. It is one of 24 gargoyles that depict animals that are native to Australia. Each of the states and territories are represented in the selection of the figures. While Bowles' specific artistic intentions have never been clear, he did express his desire to use subjects that he felt at the time were particularly Australian. In a letter to the Memorial dated 18 March 1940, reporting on his progress, he noted "As every gargoyle is different and represents and Australian animal, reptile or bird, or other life of Australia, this part takes some research and designing" (AWM315 234/002/032).

In 1940-41, Mr. W. Swan, stonemason, carved the original to this piece as a gargoyle from a plaster model created by sculptor William Leslie Bowles (see ART93048). Unfortunately, the drainage points in the original series of carved stone figures did not function properly, and leaking meant the sandstone saturated. This, along with exposure to the weather, resulted in deterioration of the stone, which cracked and broke away. The condition of the gargoyles and surrounding stone work was closely monitored from 1990, and in 2014 it was decided that replacement pieces were necessary. The original sculptures were removed from the Commemorative Courtyard and the new pieces were installed as replacements.