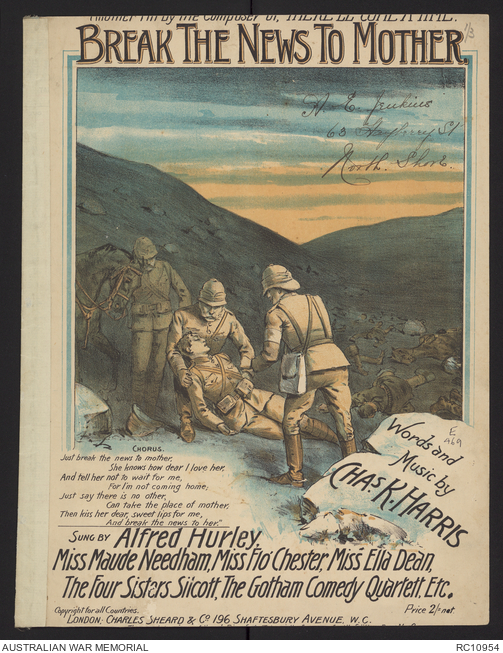 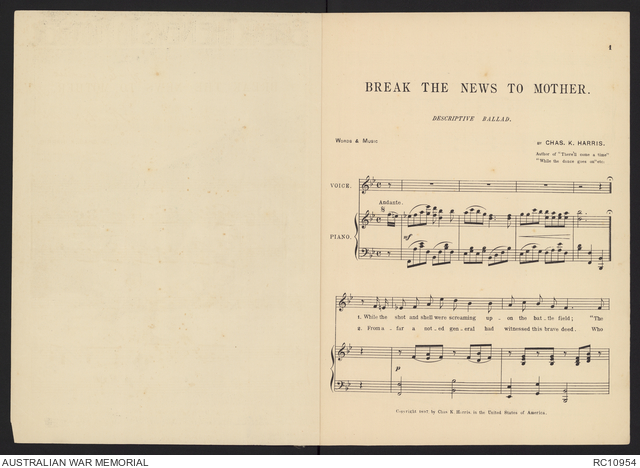 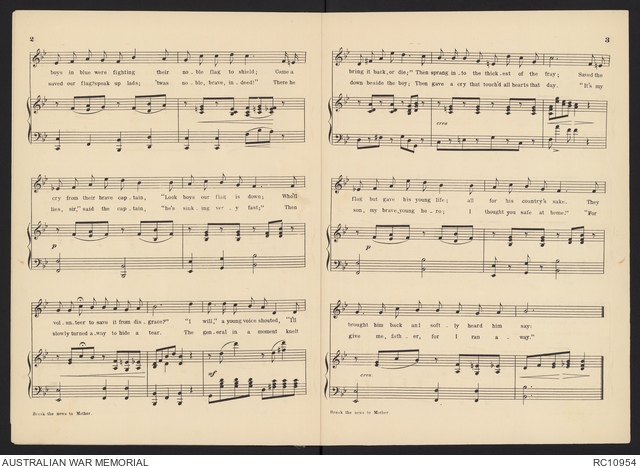 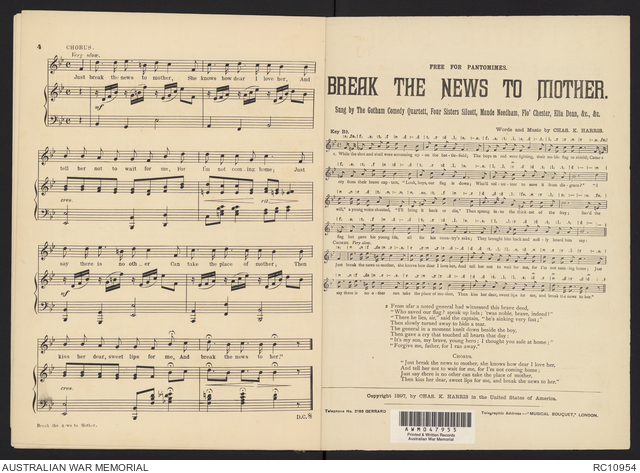 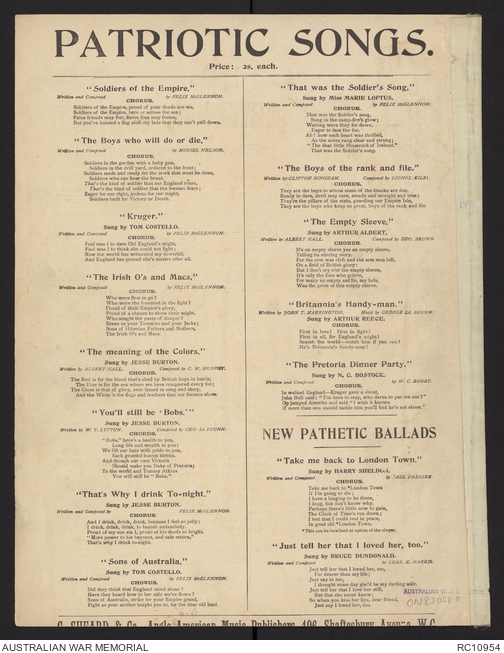 Sheet music for the song titled 'Break the News to Mother', a song that was written and composed by Charles Kassell Harris. The cover of this copy features a colour lithograph of a wounded soldier being cared for by two other soldiers with another in the background bringing up a horse. Inside the back cover of this version of the sheet music is a copy of the melody and lyrics. This abridged version of the music was intended to be used for free in pantomimes. On the back cover is a list of thirteen patriotic songs, complete with the lyrics of their choruses. At the bottom of this list are the titles of two ballads, also featuring the lyrics of the associated choruses.

This version is described on the inside cover as a descriptive ballad. The lyrics tell of a soldier requesting that his mother be told the news that he won't be coming home from the war. The song went on to be performed by many singers including Alfred Hurley, Miss Maude Needham, Miss Flo' Chester, Miss Ella Dean, The Four Sisters Silcott and The Gotham Comedy Quartet.

One story behind the writing of this song states that the song was originally written about the death of a fireman who was trying to save a burning building. Another story states that it was inspired by the request of a dying Confederate drummer in William Gillette's 'Secret Service'. The song was published during the Spanish American War and re-published again during the First World War. Sometime between 1897 and 1899, this song was used in an illustrated slide show focused on a Union soldier. In 1919, the song was re-published again and became the title of a movie, 'Break the news to mother'.

Charles Kassel Harris was an American songwriter who is regarded as one of the early pioneers of Tin Pan Alley and also contributed to the development of the genre of sentimental ballads. Harris also produced songs for musicals and worked with Oscar Hammerstein II.

The song titled "Break the news to Mother", featured in patriotic and farewell concerts in Australia during the First World War.

One of the earliest mentions of a performance of this song in Australia during the First World War, was reported on Friday 27 November 1914, following the second patriotic concert in Mareeba, Queensland. The song was performed by Mr T Nutt amidst a recreated hospital scene at the front. Another performance of this song was by Miss Butt on 28 July 1915 at Pullitop, New South Wales, at a ball to raise money for wounded Australian soldiers. The song also received a lot of advertising attention in Australian newspaper from November 1917 onwards.

This song was also popular at concerts farewelling soldiers who had enlisted in the Australian Imperial Force. This applied to a concert held at Cobar on Friday 3 March 1916 to farewell Corporal Walter James Mitchell, Private Robert Alexander Gordon Mitchell and Private Fred Dungan. Walter and Robert Mitchell both served with the 13th Battalion.