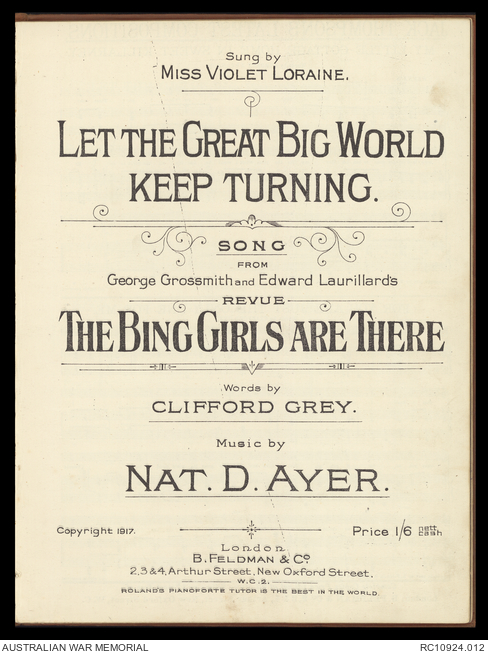 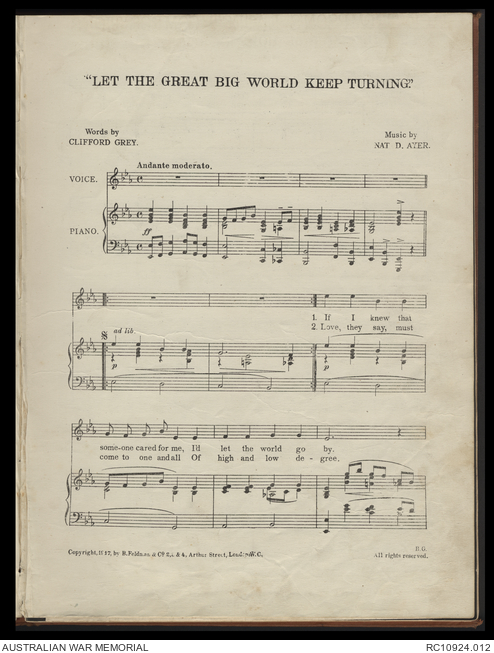 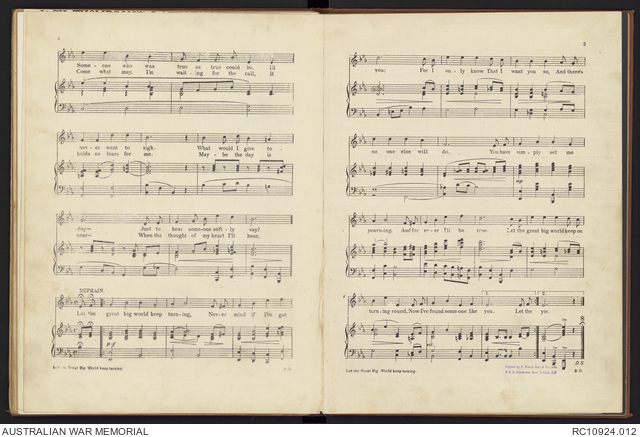 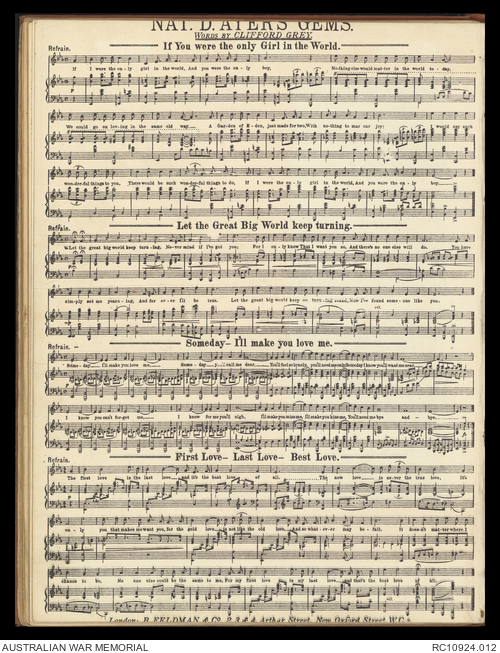 Sheet music for the song titled 'Let the great big world keep turning', with music composed by Nat D. Ayer and lyrics written by Clifford Grey. The sheet music for the song was first published in 1917. This copy has been collated into a collection of sheet music titled Australian Y.M.C.A. Songs, Vol. IV that was published about 1918. The back page features advertising excerpts from other songs written by Ayer and Grey titled 'If You were the only Girl in the World', 'Let the Great Big World keep turning', 'Someday I'll make you love me' and 'First Love - Last Love - Best Love'.

'Let the great big world keep turning' describes sentimental longing and the desire for love. The song was first recorded by Mr. Ernest Pike during May 1917. It also featured in the George Grossmith and Edward Lauillard's revue ‘The Bing Girls are There’

Nathaniel Davis Ayer, more commonly known as Nat D. Ayer, was born at Boston, USA, on 5 August 1887. The composer, pianist and performer spent much of his career in England, and composed the music for several successful shows during the years of the First World War including 'The Bing Boys are Here', which was one of the biggest West End hits during the war. One of his most famous songs was 'If you were the only girl in the world', which featured in 'The Bing Boys are Here'. He composed songs with Clifford Grey, Harry Williams and A. Seymour Brown.


Clifford Grey was born as Percival Davis and throughout his life was known as Clifford Grey, Tippey Grey and Tippy Gray. Throughout his career, he wrote the lyrics for over 3000 songs. He died of a heart attack after the concert party he was presenting in Ipswich, Suffolk, was bombed during the Second World War.

The song 'Let the great big world keep turning', was popular in Australia during the final years of the First World War. Advertisements for the sheet music of the song appeared in Australian newspapers during March 1918, with the first recorded performance of the song by the Berrybank Concert Party to raise money for the Soldiers Comfort Fund at Warrnambool on 24 January 1918. Similar concerts were held at the Victoria Theatre in Newcastle on 5 June 1918 as part of the War Chest Revue where it was performed by Mrs. A. A. Rankin, with the program featuring the heading 'For our fighting men.' A trench comforts fair held at Bunbury's Bedford Hall on 30 and 31 October 1918 also featured a performance of the song, on this occasion by Miss Allen of Perth.

'Let the great big world keep turning' also garnered popularity amongst members of the Australian Imperial Force, who began performing it as early as June 1917. Private Kynman was one of the first to do so during a performance of The Pierrots on 23 June 1917. The Anzac Coves also featured the song in their Christmas pantomime ‘Dick Whittington and His Cat’ during December 1917.

'Let the great big world keep turning' was also a popular song for welcoming home returned service personnel after the war. Mr. Murray performed the song twice within a week to welcome home local soldiers at the School of Arts in the town of Stroud, north of Newcastle. The first event was organised by the Girls' Patriotic League to welcome Sergeant Frank Grant on 27 February 1919. Two nights later, he performed the song again for the welcome home celebrations of Private Ken Farley. Miss Dolly Hain, dressed in the uniform of a scout, also performed the song to great applause at a welcome home event for soldiers from the Cooma district on 12 June 1919.

The song remained popular for many years after the war with regular mentions in newspapers from the 1920s through to the early 1950s. Some of the later references to the song were often related to a radio show titled ‘London Leave’ on the ABC in December 1946. The show featured ‘Let the great big world keep turning’ along with other popular songs from the famous stage shows of the period that Australian servicemen would have seen in London while on leave.