[Sheet music] If You Were the Only Girl in the World 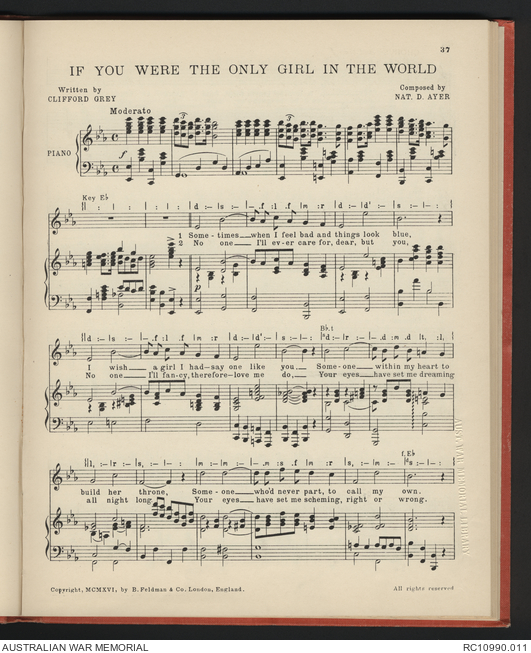 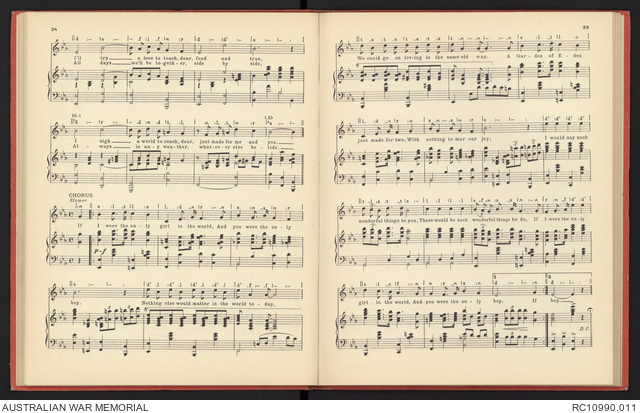 Sheet music for the song 'If You Were the Only Girl in the World', composed by Nat D. Ayer with lyrics written by Clifford Grey. The song was first published in 1916. It featured in the musical revue 'The Bing Boys Are Here' where it was performed by George Robey and Violet Loraine.

This copy of the sheet music is part of an anthology of music titled 'Songs that Won the War : Daily Express Community Songbook No. 3' collected and edited by S. Louis Giraud. The cover of the anthology features an embossed portrait of two soldiers in uniform.

George Robey had intended to sing this song in a way that would make people laugh but decided to sing the song with sincerity just before going on stage for the first performance (Harding, 1990, p.86). This song went on to become one of the biggest hits during the period of the First World War. It was also recorded and became a popular gramophone record.

The song was described in the Melbourne newspaper 'Table Talk' on 8 March 1917, as ‘a song rich in beauty of sentiment and expression…Will become the most popular song of the day in Australia…a song with a most taking rhythm and tune’.

Nathaniel Davis Ayer, more commonly known as Nat D. Ayer, was born in Boston, USA, on 5 August 1887. The composer, pianist and performer spent much of his career in England, and composed the music for several successful shows during the years of the First World War including 'The Bing Boys are Here', which was one of the biggest West End hits during the war. 'If you were the only girl in the world' was one of his most famous songs. He composed songs with Clifford Grey, Harry Williams and A. Seymour Brown.

Clifford Grey was born as Percival Davis and throughout his life was known as Clifford Grey, Tippey Grey and Tippy Gray. Throughout his career, he wrote the lyrics for over 3000 songs. He died of a heart attack after the concert party he was presenting in Ipswich, Suffolk, was bombed during the Second World War.

The song, 'If you were the only girl in the world' was a popular song with Australian service personnel during the First World War period. This song featured in a concert given by the Marathon Symphony Orchestra in the Officers Mess aboard HMT Marathon on 27 June 1917 as part of a selection of songs titled 'Empire Land'. Other songs included in the selection included 'Kentucky Home', 'Till the sands of the desert grow cold' and 'Long, long trail'.

The sheet music for this song was first mentioned in Australian newspapers a as available for purchase on 10 March 1917 when it was advertised by Dinsdales' Music Store in Melbourne. Other music stores soon followed and Dinsdales' soon started advertising the song as a 'sensational success'.

'If you were the only girl in the world' also featured at concerts to raise money for other war-related appeals during the First World War period. The Westonia Girl Entertainers organised a concert at the Olympia Hall, Westonia, Western Australia on 14 January 1918 to raise money for trench comforts for the soldiers. The song was performed during the concert as a duet by Miss McNamara and Miss Brown. A concert was organised in honour of women war-workers from Scotland at the Katoomba Town Hall at the end of February 1918. The Gard-Kerr pierrots played an important part in the concert with this song performed by 20 boys and girls.

This was also a popular song at farewell and welcome home receptions for Australian service personnel during the First World War. Miss Hanbridge and Miss Walsh performed this song at a reception for returned soldiers from the Camperdown district of Victoria on 2 July 1917. Miss I Johns performed ‘God bring you back to me’ during a farewell concert held at Munni, New South Wales on 7 August 1918 in honour of Private Leslie Fisher and this song was followed by an encore performance of ‘If you were the only girl in the world’.

Other performances of this song during the First World War period were given by community bands and professional performers. The song was performed by Mr Nash at a concert by the Goulburn Railway and Tramway Institute Concert Party at Moss Vale on 7 November 1917. This song was also performed by Minnie Love when the revue ‘The Bing Boys’ ran for a two week season at the Theatre Royal, Adelaide, during June 1918.