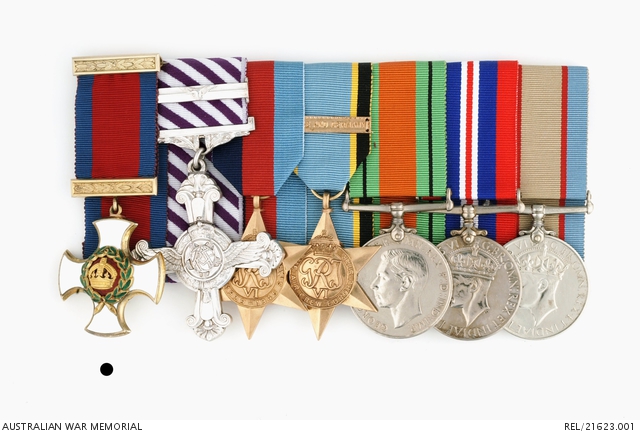 This Distinguished Service Order was awarded to Flying Officer Arthur Stanley Grant for his actions during a bombing mission over Le Creusot, France in 1942. Born in Inverell on 21 June 1913, Grant was working for the Goldsborough Mort Company at the outbreak of war. He applied for admission to the RAAF and was accepted for the Empire Air Training Scheme in October 1940 as a navigator.

After training in Canada he arrived in England in October 1941 as pilot officer, qualified in Air Observer Astro Navigation. On completion of operational training he was promoted to flying officer on 18 February 1942. A week later Grant arrived at 455 Squadron equipped with Handley Page Hampden bombers, based in Nottingham.

The first operational flight for Grant was a mine laying mission off the French port of L'Orient on 9 March. Over the next seven weeks he flew mine laying and bombing missions over France, Germany and the Dutch coast. In late April he transferred to 420 Squadron Royal Canadian Air Force also flying Hampdens, and took part in two '1000 bomber raids' over Cologne and Essen. In July he transferred to 49 Squadron RAF.

On October 17, 49 Squadron was involved in a low level daylight attack on the Schneider armament works at Le Creusot. The raid was an outstanding success, not least because of Grant's exceptional navigation. Following the raid, the operations board showed the scheduled and actual times of arrival to target and return to base to be identical. For their execution of the mission both Wing Commander Leonard Cain Slee and Grant were awarded the Distinguished Service Order. The citation for the award reads in part:

'On 17th October, 1942, Wing Commander Slee and Flying Officer Grant were captain and navigator respectively of the leading aircraft of a large force of Lancaster bombers which attacked the Armament and Locomotive Works at Le Creusot. Much depended on their efforts but each in his respective role displayed superb skill and determination and a large measure of the outstanding success achieved can be attributed to their sterling work.'

Five days later Grant took part in a bombing raid on the Italian fleet at Genoa. During this mission, the aircraft's compass failed leaving Grant to reckon a course to the target and return utilising astronavigation, the practice of using celestial bodies to calculate an aircraft's position. The calculations proved so accurate that the mission was successfully completed. His actions during this raid contributed to his being awarded the Distinguished Flying Cross (DFC).

Grant's first tour was completed with a run over Munich on 21 December. Taking a break from operational service, Grant was posted to the Bombing Development Unit on 6 January 1943. During this period he was involved in the training of Pathfinder Force (PFF) units in the use of new navigation and target identification aids. Promoted to acting flight lieutenant early in his posting, his rank was made substantive on 18 August.

Grant commenced his second operational tour on 28 January 1944 as a Pathfinder with 139 Squadron. In February and March alone Grant flew over a dozen missions above Germany taking in Frankfurt, Berlin, Munich, Kiel, Hanover, and Cologne. He was promoted to squadron leader on 8 March.

On 19 March, during a raid over Berlin, his aircraft received severe damage from anti-aircraft fire, knocking out the navigation system. Grant again reckoned a course to the target and return without the aid of a compass. For his actions he was awarded a Bar to his DFC.

Following the war, he resumed his career with Goldsborough Mort, resigning in 1966 to work with an Adelaide based trustee firm. Ill health forced his retirement in 1972 and he died in the Repatriation General Hospital on 7 September 1991.