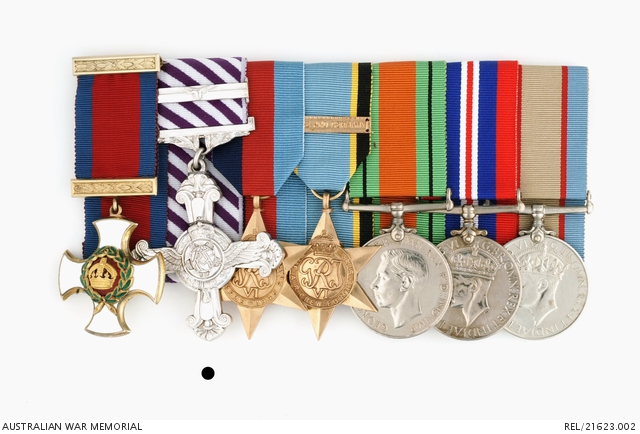 Distinguished Flying Cross (Geo VI) and Bar. Cross and Bar both engraved on reverse with the years of issue.

This Distinguished Flying Cross and Bar was awarded to Squadron Leader Arthur Stanley Grant. Born in Inverell on 21 June 1913, Grant was admitted to the Empire Air Training Scheme in October 1940 as a navigator. He arrived in England in October 1941 as a pilot officer, qualified in Air Observer Astro Navigation. On completion of operational training he was promoted to flying officer on 18 February 1942. One week later he arrived at 455 Squadron, based in Nottingham.

The first operational flight for Grant was a mine laying mission off the French port of L'Orient on 9 March. Over the next seven weeks he flew mine laying and bombing missions over France, Germany and the Dutch coast. In late April he transferred to 420 Squadron Royal Canadian Air Force and took part in two '1000 bomber raids' over Cologne and Essen. In July he transferred to 49 Squadron RAF.

Grant was awarded a Distinguished Service Order for his actions during a raid on the Schneider armament works at Le Creusot on October 17. Five days later Grant took part in a bombing raid on the Italian fleet at Genoa. During this mission, the aircraft's compass failed leaving Grant to reckon a course to the target and return using astronavigation, using celestial bodies to fix the aircraft's position. His calculations proved so accurate that the mission was successfully completed. His actions during this raid contributed to his being awarded the Distinguished Flying Cross (DFC). The citation for the award reads:

'This officer's keenness in the air and on the ground has been of the highest order and his determination and efficiency have contributed largely to the successes gained by his crew. On one occasion, during a raid on [Genoa] the compass became unserviceable and it appeared that the flight might have to be abandoned. By his skilful use of astro navigation Flying Officer Grant overcame the difficulties and directed the aircraft to the target and back to this country. His meticulous accuracy and unnerving skill have inspired confidence in others.'

His first tour was completed with a run over Munich on 21 December which was followed by a non-operational posting to the Bombing Development Unit on 6 January 1943. Promoted to acting flight lieutenant early in his posting, his rank was made substantive on 18 August.

Grant commenced his second operational tour on 28 January 1944 as a Path Finder with 139 Squadron. Over February and March alone, Grant flew over a dozen missions above Germany taking in Frankfurt, Berlin, Munich, Kiel, Hanover, and Cologne. He was promoted to squadron leader on 8 March. On 19 March, during a raid over Berlin, his aircraft received severe damage from anti-aircraft fire, knocking out the navigation system. Grant again reckoned a course to the target and return without the aid of a compass. For his actions he was awarded a Bar to his DFC. The citation for the award reads:

'Squadron Leader Grant is an outstanding officer who has consistently obtained fine results from his missions. In March 1944, he was navigator of an aircraft detailed to attack Berlin. While on the bombing run the aircraft was illuminated by searchlights and subjected to severe anti-aircraft fire. Much damage was sustained and one engine put out of action. Undeterred, Squadron Leader Grant completed his bombing run and subsequently navigated the aircraft back to this country without navigational aids. The outstanding courage and devotion to duty of this officer has at all times set a fine example to all of his squadron.'

Following the war, he resumed his career with Goldsborough Mort, resigning in 1966 to work with an Adelaide based trustee firm. He retired due to ill health in 1972 and died in the Repatriation General Hospital on 7 September 1991.