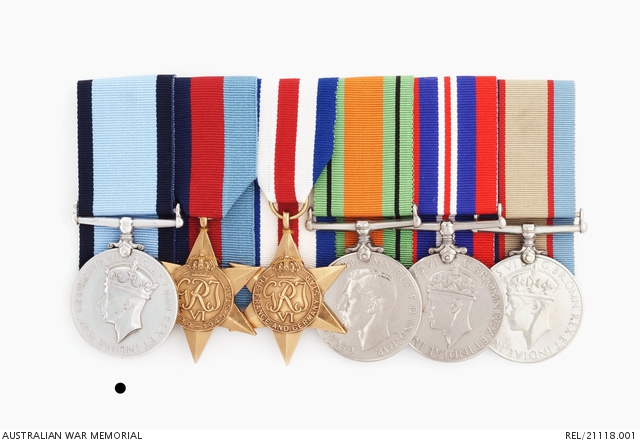 Awarded to 437121 Warrant Officer (WO) Kevin John Dennis, born on 5 September 1924 at Ceduna, South Australia. Dennis was working as a bank clerk when he enlisted at Adelaide in the Royal Australian Air Force (RAAF) on 7 November 1942. After qualifying as a Wireless Operator/ Air Gunner (WAG) Dennis was posted to 462 Squadron RAAF in England, operating Halifax aircraft as part of Bomber Command. On the night of 13/14 March 1945, Dennis’s aircraft, Halifax RG384, took off from RAF Foulsham at 6.02pm to carry out an attack on the Frankfurt area of Germany. Eleven aircraft from 462 Squadron took part in the raid. RG384 crash landed at Juvincourt airfield, France, at 10.30pm on 13 March 1945. The aircraft had successfully carried out the mission but during the sortie the starboard wing and engines were damaged by flak and it proved impossible to return to England. The Flight Engineer, Sergeant Charles Welsh, was killed by the flak entering the aircraft and the Navigator, Flight Lieutenant Kevin Shanahan and the WAG, Warrant Officer Dennis were wounded. Despite the severe wounds sustained by Dennis when the aircraft was hit he continued with his duties until the aircraft had landed. On 24 May 1945 King George VI approved the immediate award of the Conspicuous Gallantry Medal to Dennis, which for airmen ranked only second to the Victoria Cross. The recommendation reads: 'WO Dennis was the Wireless Operator in a heavy bomber detailed to attack Frankfurt on the night of 13 March 1945. Shortly after leaving the target, the aircraft was hit and damaged by flak, killing another member of the crew and wounding WO Dennis. Although most of one foot was severed and his other leg also wounded, the WOP [wireless operator] refused to leave his seat until the aircraft landed. He was bleeding profusely and even with first aid applied the bleeding could not be stopped. He carried on with his duties, and correctly received all messages passed to the aircraft, obtaining a weather report from a diversionary airfield in France to which the aircraft was being flown. The courage displayed by WO Dennis was of the highest order when he must have been experiencing extreme agony.' After hospital treatment and extensive rehabilitation Dennis returned to Australia with his English wife, Olive, who he had married in December 1945. He was discharged on 7 June 1946. Only ten Conspicuous Gallantry Medals (Flying) were awarded to members of the RAAF during the Second World War.