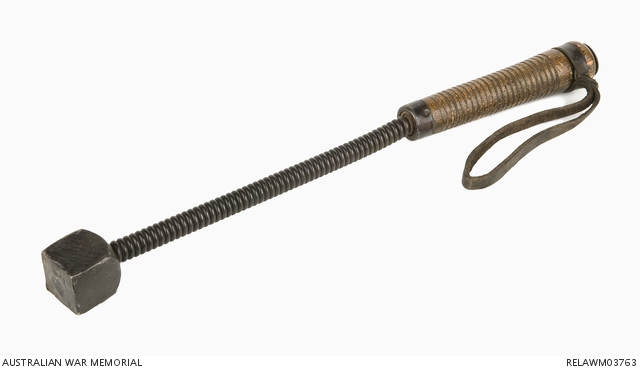 German Army trench club featuring a wooden handle and a coil spring steel flexible truncheon. The end of the truncheon has a square metal nut attached. The wooden handle has a serrated grip and is unpainted. There is a leather wrist strap attached to the handle. The coil spring and nut are painted gloss black. There are no markings.

This German raiding club was found in the Queant-Drocourt line near Harnes in 1918 by the 3rd Australian Tunnelling Company. Trench raids were small scale surprise attacks made on enemy front line positions. Small teams would silently cross no man's land, usually at night, and infiltrate enemy positions. The raids had several purposes including gathering intelligence, killing or wounding enemy troops, reducing enemy morale by instilling fear and a feelings of uncertainty, or disabling enemy equipment. The soldiers were lightly equipped in order to move quickly and quietly. While pistols or grenades could be used, often hand weapons such as knives, clubs and bayonets were used as they could be carried easily and not attract as much attention due to noise or damage caused.