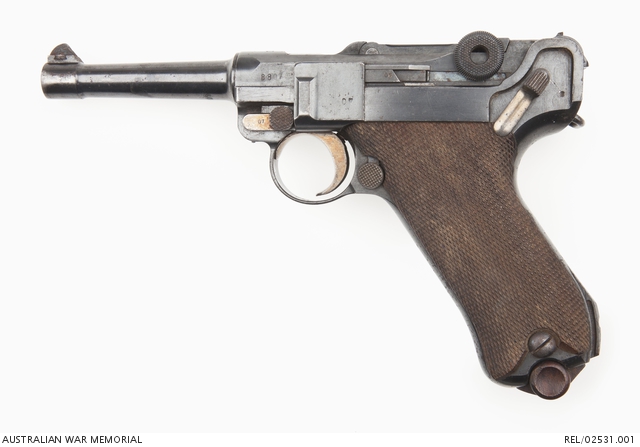 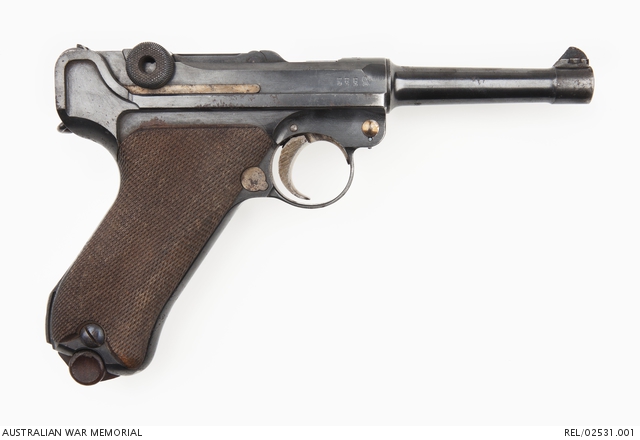 Luger P08 semi automatic pistol. Overall blued machined steel frame. Toggle marked with DWM and 1916 on the breech. Checkered wood grips and has a 'T' section slide at the backstrap to take a shoulder stock. Safety catch on the left side. The pistol is complete with a matching eight shot magazine.

German Luger pistol captured or collected by Corporal Cyril Percy Bull of South Yarra, Victoria. A shipping clerk, Bull enlisted on 16 July 1915, aged 25 years 7 months, and was assigned service number 7851. He was attached to 1 Australian General Hospital and embarked to Egypt. In August 1916 he was transferred to the Australian Auxiliary Hospital in England and promoted to the rank of corporal; a month later he was transferred to 4 Field Ambulance in France, and actually joined them on 11 October 1916; a day later, he was attached to 15 Battalion. He remained with this unit until 15 February 1918. A clue to his actual role in this unit may be found in AWM photo E00900, taken at Passchendaele on 26 September 1917, which shows Bull at the 15th Battalion’s Regimental Aid Post, (a recently captured German medical station). It is possible the German Luger and its holster came from this period.

On 22 May 1917, Bull was awarded the Military Medal for ‘conspicuous services.’ It is likely this was for the battalion’s involvement in the Bullecourt operation; the battalion’s operation report noted that ‘our stretcher bearers did wonderful work getting wounded in under enemy fire, towards afternoon the enemy allowed Stretcher Bearers to get the wounded without interference but in the morning he fired on them.’ The battalion suffered 19 officers and 364 other ranks as casualties.

Upon his return Bull spent a short period back with 4 Field Ambulance before being transferred to 4 Machine Gun Battalion on 18 April 1918; he was only with this unit for two months before being recommended for Officer’s training; he was sent to Officer’s training in England, and by the time he qualified, the war was over. Bull was promoted to second lieutenant before being returned to Australia in mid-1919 and being discharged. Cyril’s brother, 2978 Second Corporal Leslie Stewart Bull, also enlisted, serving with the 5th Field Company Engineers, but died of wounds on 2 January 1917.