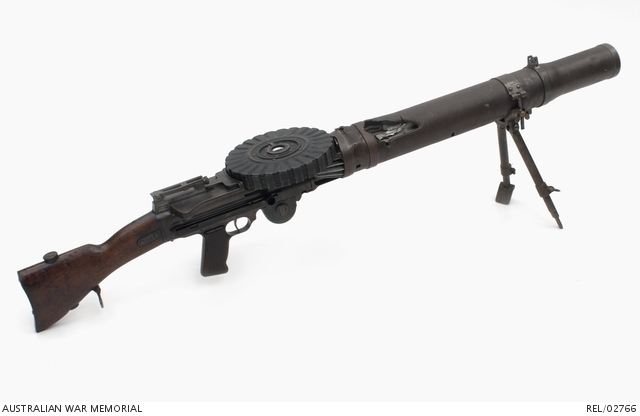 This particular weapon is a highly significant relic of the Australian Imperial Force. In the hands of a known number of Australian soldiers it played a role in the complete service history of a highly decorated South Australian unit, the 27th Battalion, on the Western Front from 1916-1918.

Hand painted on the barrel jacket is: 'This gun was issued to the 27 Battalion AIF in March 1916 and remained in action until knocked out by a shell at Grandcourt on 3 October 1918. It was the only original issue item to take part in every unit engagement. It fired upwards of 150,000 rounds. Of the 60 men who passed through its team four achieved commissioned rank, 10 became NCOs, 21 were killed and 32 wounded'.

Weighing in around 13 kilograms fully loaded with a distinctive round shaped magazine containing 47 rounds of ammunition, the Lewis Gun was one of the main weapons used by the Australian Imperial Force during the First World War.

The Lewis gun saw extensive service with British and Australian forces during the First World War as a ground and aerial machine gun. During the Second World War it was also used by on a much lesser scale by all three services (Navy, Army and Air Force) of the Australian Defence Force.