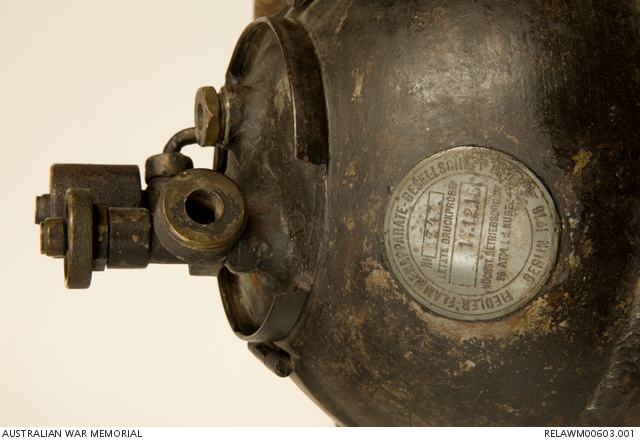 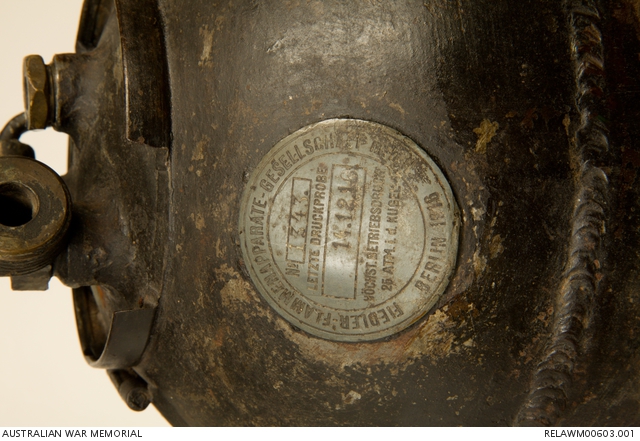 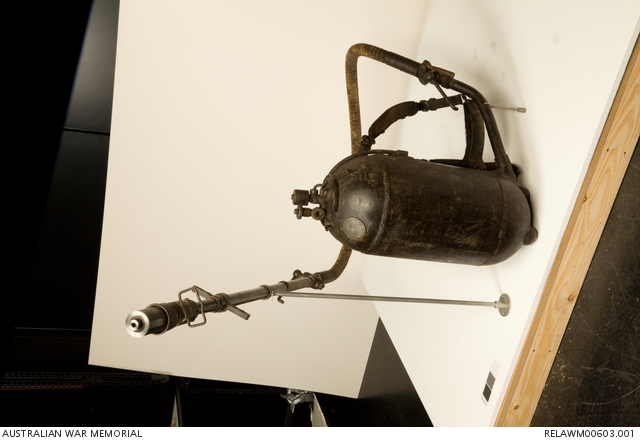 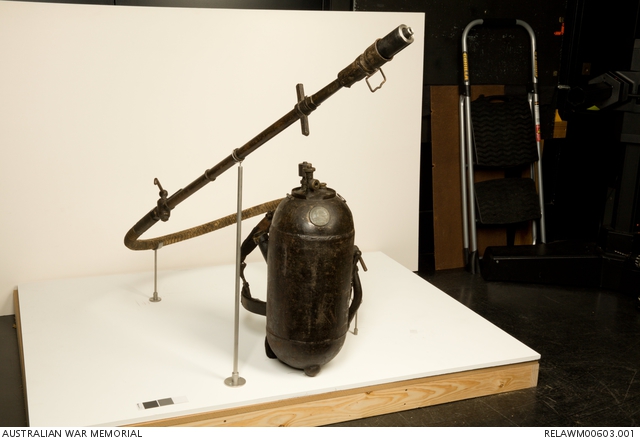 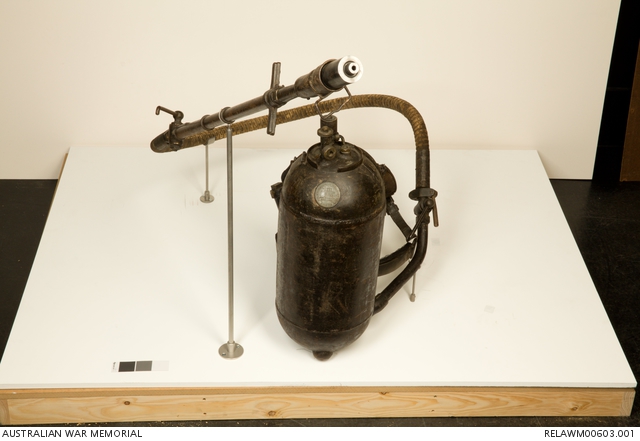 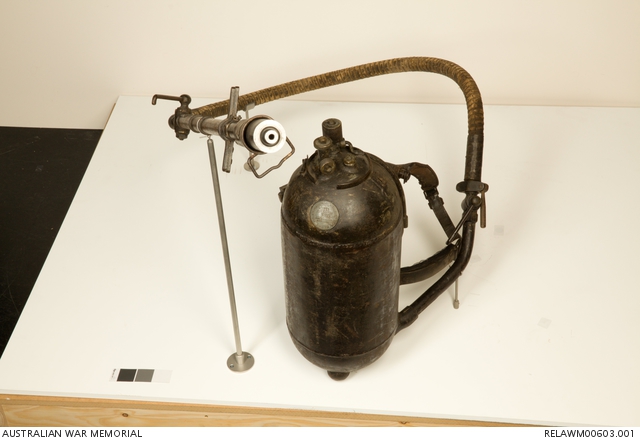 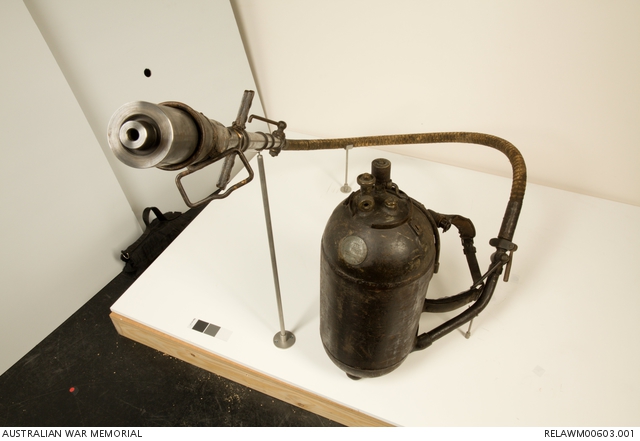 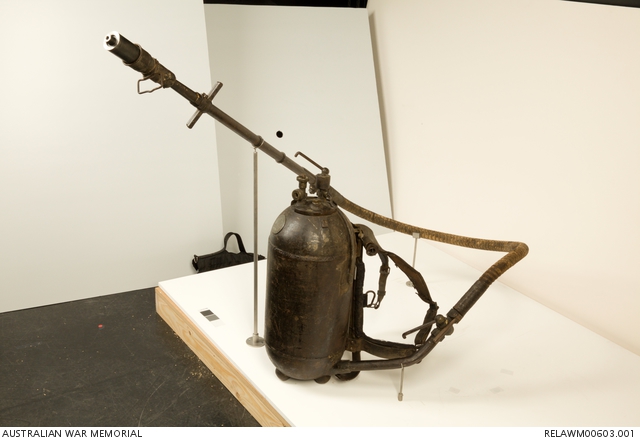 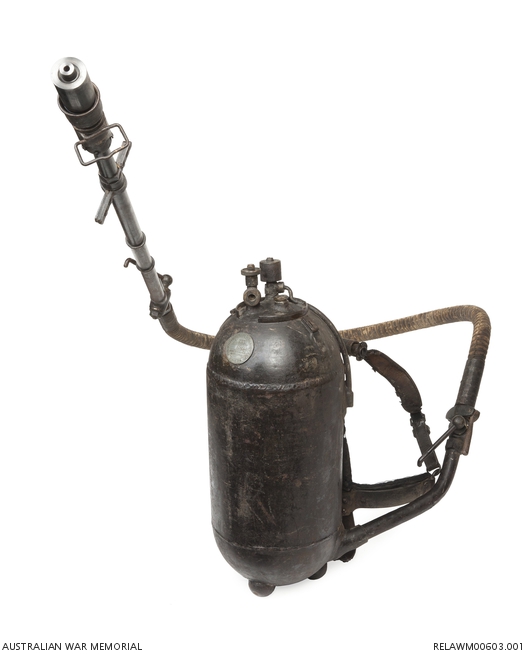 This is the medium version of the German 1917 model flamethrower. The oil tank is made from a heavy-gauge steel tube 330mm high with domed ends welded top and bottom, and painted black overall. Much of the paint is now missing. Three ball support feet are attached to the base. A brass pressurising valve, brass needle pressure gauge (both with knurled wheels) and propellant filling point are all located at the top of the tank. A steel collar surrounds these, originally to locate the (now missing) protective cover. However, the lower section of the cover hinge and the clamp strap on the opposite side still remain. An oil filling tube with a brass screw cover is welded to the upper left side. Welded to the lower right side is an outlet port to which is screwed a curving outlet pipe, 278mm in length, ending in a brass release valve with actuating handle.

A circular maker's plate of mild steel is welded to the upper centre rear of the tank. It is impressed with the following details: (central) "1343 [serial] / LETZE DRUCKPROBE / 14.12.16 / HOCHST BETIEBSDRUCK / 25 ATM 11 KUGEL"; and, around the circumference "FIEDLER FLAMMENAPPARATE GESELLSCHEFT m.b.H BERLIN 1916".

A set of carrying straps are attached to the body of the tank. There is a vertical plate welded to the tank, padded with black felt, to which is screwed, at its highest point, a horizontal tube. Fitted to this are a pair of adjustable buckled leather shoulder straps, 45mm in width, held to either side of the tube with a washer and split pin. A pair of supports, made from metal strapping designed to wrap around the wearer's waist are welded to the backplate. There is no complete waistbelt. A pair of side legs extend from the lower end of the backplate to curve down under the tank - these are shod in rubber and are designed to provide additional support to the unit when not being worn.

A lead seal, attached to a ring of twisted wire, is attached to the upper right shoulder strap support. It carries a crown on one side and the initials 'JR' on the reverse.

1917 modification of the medium (mittlere) Kleif version of the First World War German Army man-pack flame thrower (Flammenwerfer). This unit was originally developed in 1912 as the kleine (small) Flammenwerfer (Kleif). It consists of a welded steel cylinder for oil storage, incorporating a small internal chamber in the top of the tank for propellant storage (different propellants were used - usually carbon dioxide or nitrogen). The propellant pressurised the oil prior to firing. A dispersal lance on a flexible tube was attached to the angled outlet pipe at the lower right of the tank. This was controlled with a swivel valve. The pressurising valve, pressure gauge and propellant filling point are all located externally at the top of the tank; these are protected by a metal cover (missing on this example).

A series of modifications to the original 1912 design occurred every year between 1914 and 1917, and were mostly applied to increase useability, safety and durability. This model includes an external propellant feed line on the right side of the tank (replacing the previous internal line, which proved impossible to access for repair); enlarged oil filling tube on the left of the tank; and a hinged protective cover for the upper valves and gauge (previously a screw-top cover). This model is also characterised by a trio of ball-style feet at its base - pervious models were equipped with three rod-style feet. The 1917 model remained in production until the end of the war. The December 1916 date of this unit indicated that changes to the 1917 model were in development quite early.

Originally, only two models were developed and used by the German Pioneers; a large (grosse) flamethrower; and the portable backpack (the kleine or small) Kleif flamethrower, of which this is an example. However, the development of an even smaller backpack version (the Wechtslapparat or "Wex", with its distinctive doughnut shape) in 1916/17 led to the Kleif being redesignated the medium (or mittlere) version.

The flammenwerfer was used almost exclusively by German Guard Pioneer Units who worked closely with infantry assault battalions throughout the war. The notes accompanying this flame thrower state that it was "captured by the Australians near Ypres on 20 September 1917", at the Battle of Menin Road. Bean notes (p 762, Vol 4 of the Official History) of this successful assault against German positions in front of Polygon Wood that "[a]t the very outset the right of the Anzac line passed over a disabled flammenwerfer apparatus and a machine gun with their German crews lying dead around them. It was not known until afterwards that these were the remaining signs of a dangerous flammenwerfer attack that had been made against the 1st Battalion's covering post at Cryer's Farm, only 25 minutes before the start of the offensive." This flamethrower was actually handed to the Australian War Records Section by Major Herbert Ward Wilson, OBE, MC, a Chemical Adviser working with the 58th Battalion, which was present at the Battle of Menin Road.