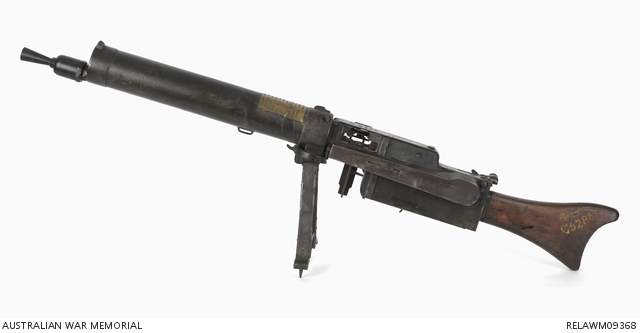 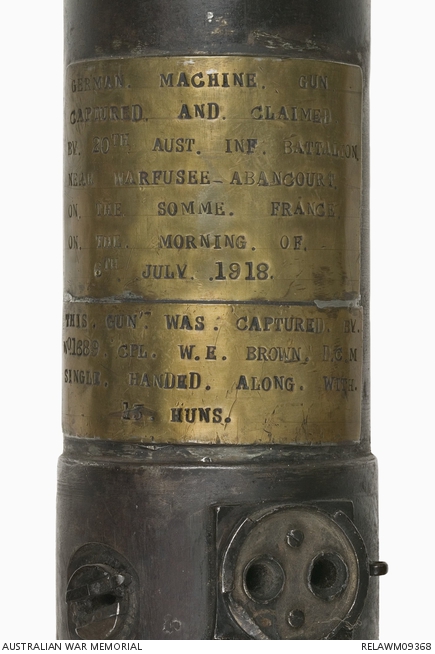 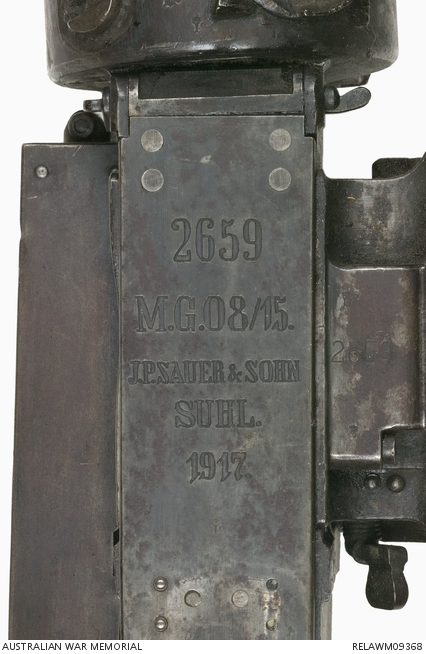 The MG 08/15 Maxim machine gun is a short recoil operated, water cooled, full automatic, belt fed weapon. The operating system uses a two part toggle lock connected by a hinge which is located between the breech block and a barrel extension. The entire barrel extension and breech block recoil inside receiver against the tension of a spring located under the separate cover outside of the left receiver wall. The cocking handle is located on the rear axis of the toggle lock and serves as both an unlocking member and a breech block accelerator. The feed system use non disintegrating belts made from cloth or tarpaulin with metallic alignment struts. Ammunition feed is from the right side. The MG08/15 is usually attached to a bipod. The Maxim gun fires from closed bolt toggle lock action. The feed system uses non disintegrating belts, made from cloth or tarpaulin, with metallic struts. Feed was from the right side only and was accomplished through the horizontally pivoting pin / levers system by the recoiling barrel group. The top cover plate is stamped with the serial number, M.G.08/15, J.P.SAUER & SOHN SUHL 1917. There is a brass plate on the barrel stamped GERMAN MACHINE GUN CAPTURED AND CLAIMED 20th AUST INF BATTALION NEAR WARFUSEE ABANCOURT ON THE SOMME FRANCE ON THE MORNING OF 6th JULY 1918. THIS GUN WAS CAPTURED BY No 1689 CPL W E BROWN, DCM SINGLE HANDED ALONG WITH 13 HUNS. The fuzee spring cover is numbered 5088 and in yellow paint on the bottom of the butt is PART C5286. This gun is complete with the feed mechanism, bipod (damaged on the right leg), ammunition box bracket, muzzle compensator and breech block.

This German Maxim light machine gun was captured by 1689A Corporal Walter Ernest 'Wally' Brown, near Vaire Wood, in the action for which he was awarded the Victoria Cross. Brown was born in New Norfolk, Tasmania on 3 July 1895. Prior to the outbreak of the First World War, he worked as a grocer in New Norfolk before moving to Petersham in Sydney. He enlisted in the AIFat Liverpool, NSW on 26 July 1915 and was posted to the 11th Reinforcements, 1 Light Horse Regiment (1LHR).

The unit embarked from Sydney on 23 October 1915. Brown joined 1LHR in Egypt in January 1916 though he was transferred to 20 Battalion (20 Bn) on 7 July, and finally taken on strength to the battalion in France in August 1917. During fighting around Passchendaele between 5 and 10 October, he tended to wounded under heavy fire and took charge of his section when his sergeant was killed. For his actions during the fighting, Brown was awarded the Distinguished Conduct Medal. On 7 April 1918 he was promoted to corporal.

On 6 July, following the Battle of Hamel, Brown was detailed as part of 20Bn's advance party for the relief of 21Bn on the right of Vaire Wood. Brown was told of a German sniper that had been causing problems and went forward to 'have a pot at them.' Working his way along the shallow trench Brown spied a mound approximately 70 yards across open ground when he heard a shot fired.

Surmising that this was the source of the enemy sniper he discarded his rifle in favour of two Mills bombs (hand grenades) and rushed the mound. When another shot was fired he threw one of the bombs, which fell short, and dropped to ground. After a few minutes when there was no reaction from the mound, he again rushed forward. Presently he found himself looking down into a trench, empty apart from an unmanned German machine gun (the subject of this record) and the entrance to a dugout.

Jumping into the trench he reached the dugout entrance just as a German emerged. Brown struck the German who fell back down the stairs. Unaware of the existence of another entrance to the dugout behind him, Brown turned to see other Germans appearing. Reluctant to throw his one remaining Mills bomb, he stood his ground and used it as a threat toward the enemy troops. The enemy troops immediately surrendered though Brown had to place himself in line of sight of both entrances while the prisoners moved over the parapet toward the Australian lines. He had managed to single handedly capture 13 Germans, including a highly prized officer.

He followed the prisoners and handed them over to 21Bn to take to the rear before promptly resuming his former duties. For his actions in the capture of the German trench, Brown was awarded the Victoria Cross. Historian Charles Bean noted that Brown was 'indeed the type of man certain to distinguish himself in this way if he survived.' On 7 October he was presented with his VC by King George V at Sandringham.

After the Armistice he was granted leave to undertake a cinematic course at the Victoria Cinema College in London followed by employment with the Imperial Film Company. In August 1919 he rejoined his unit in France. He returned to Australia on board the 'Nestor' on 15 December and discharged from the AIF on 15 February 1920.

Following his return to Australia he lived in Sydney before taking a position with the NSW Water Conservation and Irrigation Commission in Leeton in 1930. He married Maude Dillon on 4 June 1932 at Bexley. Following the outbreak of the Second World War, he re-enlisted and was with 2/15 Field Regiment in Singapore when it fell to the Japanese on 15 February 1942.

According to details related to his family by soldiers that were present, Brown was killed when he gave up his seat on a departing boat to another soldier and walked back toward the enemy. His body was never recovered. His name is commemorated on the Singapore Memorial. Walter Ernest Brown VC DCM was survived by a wife and two children though their seven year old son died of meningitis the following year.