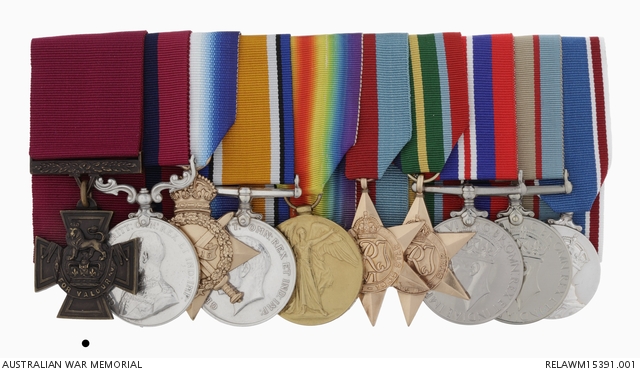 This Victoria Cross was awarded to Corporal Walter Ernest ‘Wally’ Brown who was born to Sidney Francis and Agnes Mary (nee Carney) Brown in New Norfolk, Tasmania on 3 July 1885. Before to the outbreak of the First World War he worked as a grain merchant in New Norfolk before moving to Petersham in Sydney. Brown enlisted in the AIF at Liverpool on 11 July 1915 and was posted as a private (1689) to the 11th Reinforcements 1 Light Horse Regiment (LHR).

The unit embarked from Sydney on the SS Hawkes Bay on 23 October 1915. Brown joined 1LHR in Egypt on 14 January 1916 but soon became impatient to get to the front lines. Feigning the loss of his false teeth as an excuse to be sent to Cairo, he obtained a transfer, while there, to 20 Battalion (20Bn) on 7 July. In August he sailed to England for training before proceeding to France in late September. However, nearly a year elapsed before Brown was taken on strength with the battalion. Before this he was attached to 55 Battalion for a month and then with 1 and 2 Australian Field Butcheries (AFB). While in 1 AFB he befriended Private Claude Clark Hughes and the two finally joined ‘A’ company, 20Bn at St Omer on 8 August 1917.

During fighting around Passchendaele between 5 and 10 October, Brown was singled out for his work in tending to wounded under heavy fire and taking charge of his section when his sergeant was killed. For his actions during the fighting, Brown was awarded the Distinguished Conduct Medal.

During the fighting on the 9th Claude Hughes had been killed. Brown noted the position of his grave and in February 1918, in lieu of leave to England went instead to Calais to have a cross made for his friend. He returned to the isolated spot five miles east-north-east of Ypres and erected the cross before returning to his unit on 15 February. He was promoted to corporal on 7 April.

On 6 July, following the Battle of Hamel, Brown was detailed as part of 20Bn’s advance party for the relief of 21Bn near Accroche Wood. A 21Bn sergeant told him of a German sniper that had been causing problems and, after waiting for half an hour in the hope that the Germans would betray their position, Brown went forward to ‘have a pot at them.’ Working his way along the shallow trench he spied a mound approximately 70 yards across open ground when he heard a shot fired.

Surmising that this was the source of the enemy sniper Brown discarded his rifle in favour of two Mills bombs (hand grenades) and rushed the mound. When another shot was fired he threw one of the bombs, which fell short, and dropped to ground. After a few minutes when there was no reaction from the mound, he again rushed forward. He found himself looking down into a trench, empty apart from an unmanned German machine gun (now part of the Memorial’s collection: RELAWM09368). At one end there was the opening to a dugout.

Jumping into the trench he reached the dugout entrance just as a German emerged. Brown struck the German who fell back down the stairs. Unaware of the existence of another entrance to the dugout behind him, Brown turned to see other Germans appearing. Reluctant to throw his one remaining Mills bomb, he stood his ground and used it as a threat toward the enemy troops. The Germans immediately surrendered though Brown had to place himself in line of sight of both entrances while the prisoners moved over the parapet toward the Australian lines. He had managed to single handedly capture 13 Germans, including an officer.

Brown followed the prisoners and handed them over to 21Bn to take to the rear before resuming his former duties. Word of the incident quickly spread. When Brown’s company commander, Lieutenant Cameron, found him he demanded of him, ‘What the devil have you been doing up there?’ For his actions in the capture of the German trench, Brown was awarded the Victoria Cross. Historian Charles Bean noted that Brown was ‘indeed the type of man certain to distinguish himself in this way if he survived.’ The recommendation for award reads:

'For gallant service on the morning of 6th July 1918 north-east of Villers-Bretonneux.

This N.C.O. was one of an advanced party from his Battalion making arrangements with the Battalion then in the line for relief by his own Battalion. As such he was under no obligation to participate in any offensive operations before his Battalion took over the line.
During the night of 5th/6th July the Company to which he was attached carried out a minor operation resulting in the capture of a small system of enemy trench. Early on the morning of 6th. July an enemy strong post about 70 yards distant caused the occupants of the newly captured trench great inconvenience by persistent sniping.

It was decided to rush this post. Hearing of this, Corporal BROWN on his own initiative crept out along the shallow trench towards the enemy post and then made a dash across No Man’s Land towards this post. An enemy machine gun opened from another trench and he had to take cover by lying down. He later made another dash forward and succeeded in reaching his objective. With a Mills Grenade in his hand he stood at the door of a dugout and called on the occupants to surrender. One of the enemy rushed out, a scuffle ensued and Corporal BROWN knocked him down with his fist. Loud cries of “Kamarad” were then heard, and from the dugout an Officer and eleven other ranks appeared. Driving them before him Corporal BROWN brought back the complete party as prisoners to our line, the enemy meanwhile from other positions bringing heavy machine gun fire to bear on the party.'


On 8 August 20Bn took part in the Battle of Amiens. Afterwards Brown suffered a gunshot wound to the left knee between Bayonvillers and Proyart in action designed to consolidate the substantial gains won in the battle. After hospitalisation he rejoined his unit later that same month. He was promoted to sergeant on 13 September. In October Brown was granted leave to accompany other VC winners to Australia to help with recruiting. Already aboard HMAT Marathon, prior to leaving England, he had a change of heart and applied to have the leave cancelled, insisting that ‘he should be with his mates.’ He rejoined his unit in France on 15 November.

After the war Brown stayed on in England, and was granted further leave to undertake a cinematic course at the Victoria Cinema College in London. In August 1919 he rejoined his unit in France. He returned to Australia on the ‘Nestor’ on 15 December and was discharged from the AIF on 15 February 1920.

Following his return to Australia Brown lived in Sydney. In 1927 he was feted as the one millionth visitor to enter the Australian War Memorial Museum, then located in Sydney. He moved to Leeton in 1930 to take up a position with the NSW Water Conservation and Irrigation Commission. Brown married Maude Dillon at Bexley on 4 June 1932 complete with a surprise guard of honour comprising eight VC winners: Australians B A Wark, J Hamilton, G Cartwright, G J Howell, W Currey, T J Kenny, A P Sullivan and A Evans, a British VC winner.

At Wagga Wagga, on 21 June 1940, following the outbreak of the Second World War, he re-enlisted (service number NX35492), giving his date of birth as 1900. His age was soon discovered and he was posted to 8Bn as corporal and promoted to lance sergeant on 1 July. In November he transferred to 2/15 Field Regiment and later reverted to gunner at his own request. The regiment moved to Malaya in August 1941 and was in Singapore when it fell to the Japanese on 15 February 1942.

Brown was last seen alive walking toward the approaching enemy. His daughter, Pamela, recalls the moment she heard of his fate. As a child near the end of the war she remembers the family being interrupted at dinner by two soldiers. They told the assembled family that they were the last to see Brown alive and saw it as their duty to let his family know the manner of his death.

One of the soldiers told them that he had “reached a beach where men and nurses were escaping into the water, many being shot as they ran”. When he arrived he saw Brown already in one of the few available small boats. He watched as their attempt to get the boat to sea was hampered by a terrified soldier clinging to the side. He saw Brown give up his seat to the young soldier and wade back to shore. As the second soldier escaped in another boat he witnessed Brown being captured and executed. Officially, he was posted as missing on 16 February 1942, and presumed dead on the 28th. His body was never recovered.

Brown's name is commemorated on the Singapore Memorial, 22 kilometres north of the city of Singapore at Kranji cemetary. He was survived by his wife and two children though their seven year old son died of meningitis the following year.