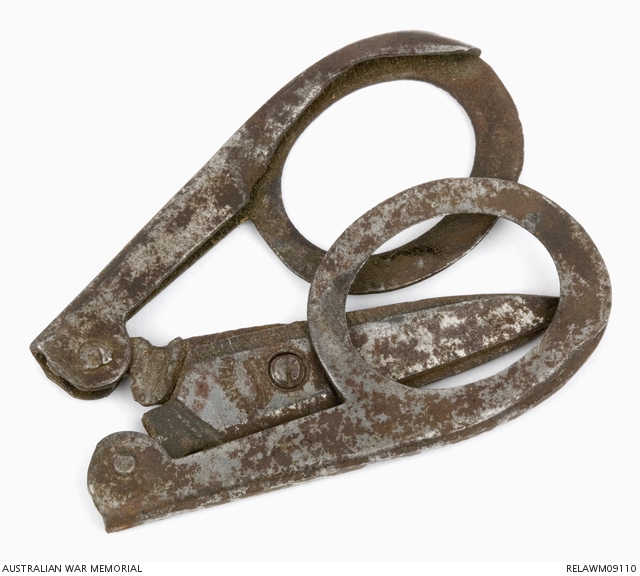 Small pair folding scissors. Pressed handles are hinged at base of blades, which are serrated on the cutting edges. Impressed on upper blade above grub screw hinge with 'FRANCE' and star flash motif.

These scissors were used by 1689 Sergeant Walter Ernest 'Wally' Brown while serving with 20 Battalion in France during the First World War.

Brown was awarded the Distinguished Conduct Medal for his actions during fighting near Passchendaele, Belgium between 5-10 October 1917.

The following year he was awarded the Victoria Cross for capturing 13 German troops, including an officer, single handedly, near Vaire Wood following the Battle of Hamel. He returned to Australia in December 1919 and was discharged on 15 February 1920.

On 21 June 1940 he re-enlisted (NX35492) in the Second AIF. With 2/15 Field Regiment he moved to Malaya in August 1941 and was in Singapore when it fell to the Japanese on 15 February 1942. Brown was last seen in the hours prior to the Allied capitulation disappearing toward the enemy lines saying 'No surrender for me.' His body was never recovered.

His name is commemorated on the Singapore Memorial, 22 kilometres north of the city of Singapore.