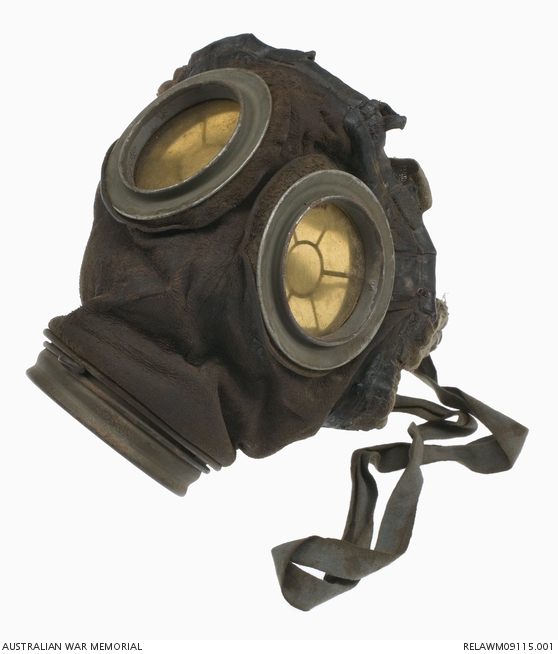 German 'Lederschulzmaske' (Leather protection mask) gas mask. Sometimes referred to as a model 1917 after the year of its introduction. The mask is made from a single piece of chrome-tanned sheepskin dipped in an oil sealant solution. The single seam running under the chin and the folded edge of the mask, are coated with a black sealant lacquer. The eyepieces are made of two layers of clear celluloid set in painted circular steel frames with leather gaskets where they are let into the mask. Internally, the eyepieces have removable metal 'wheels' enabling the inner layer (which was coated with gelatine to absorb moisture) to be replaced. Khaki cotton headstraps are connected to coiled springs inside cotton sleeves to keep mask in place. A long khaki cotton webbing strap attached near the chin enables the mask to be suspended around the neck. Stamped on face of khaki filter dock is 'M3' and 'A.G.D. No. 17'. Filter is missing.

This German gas mask , together with its carrier, was collected by Sergeant Walter Ernest 'Wally' Brown, of 20 Battalion AIF, at some time between 8 August and the Armistice on 11 November 1918. Brown was awarded the Distinguished Conduct Medal for his actions during fighting near Passchendaele, Belgium between 5-10 October 1917. He was subesequently awarded the Victoria Cross for his actions on 6 July 1918 for single handedly capturing 13 German troops, including an officer, near Accroche Wood following the Battle of Hamel.

Brown served again in the Second World War and was killed during the fall of Singapore in February 1942.

The Germans used both leather 'leder' and rubber 'gummi' masks during the First World War. Sometimes referred to as 'model 1917', after the year of its introduction, this style of gas mask was also known as the 'Ledermaske (Gasmaske 17)'. The spoked metal devices on the inside of both lenses were known informally as 'spiders'. These were removed on the improved Gasmaske 18.

These gas masks were carried in a specially designed circular tin case was known as a Lederschutzmaske (Bereitschaftsbuchen). This case contained a small compartment in the folding lid for spare set of lenses and usually contained an instruction sheet at the bottom explaining how to use the gas mask.

Due to the effective Royal Navy blockade of German ports, apart from the metal, ersatz (substitute) materials were also used in the production of gas mask cans.

One historically interesting note about the gas filters which were fitted to these German gas masks in the First World War was that they had an un-modified standard Osram brand street light screw fitting. This commercially successful innovation was utilised in the contruction of the filters to enable their quick change and in the fitting of enhanced versions of filters as required without discarding the mask itself.