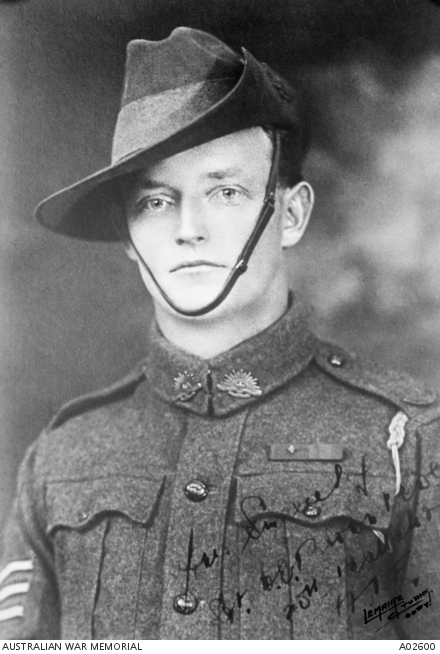 Studio portrait of 1689 Sergeant (Sgt) Walter Ernest Brown, VC DCM, 20th Battalion from Hobart, Tasmania. A 30 year old grocer prior to enlisting on 11 July 1915, he embarked for overseas with the 11th Reinforcements of the 1st Light Horse Regiment from Sydney on 23 October 1915 aboard SS Hawkes Bay. Following further training in Egypt, he proceeded to England in August and then to France in October 1916 where he joined the 55th Battalion. In November he transferred to the 1st Australian Field Butchery and then in May 1917 to the 2nd Australian Field Butchery. After transferring to the 20th Battalion in August 1917, he was promoted to Lance Corporal in October and was awarded the Distinguished Conduct Medal (DCM) for bravery on 5/6 October 1917 near Passchendaele, Belgium. Although wounded in action in Belgium in November, he returned to his battalion five days later and was promoted to Corporal in April 1918. He was awarded the Victoria Cross (VC) for gallant service on 6 July 1918 near Villers-Bretonneux, France. He was wounded again on 11 August 1918, rejoined his unit two weeks later and was promoted to Sergeant in September 1918. Sgt Brown arrived back in Australia on 15 December 1919 and was discharged from the AIF on 15 February 1920. During the Second World War, he enlisted on 21 June 1940 and was made Temporary Corporal in the 8th Battalion. After being promoted to Lance Sergeant, he transferred to 2/15 Field Regiment and embarked with them from Sydney on 29 July 1941. They arrived in Singapore on 15 August 1941 and deployed to Malaya where he was listed as missing in action on 16 February 1942. He was presumed to have died and is commemorated on the Singapore Memorial, Singapore.