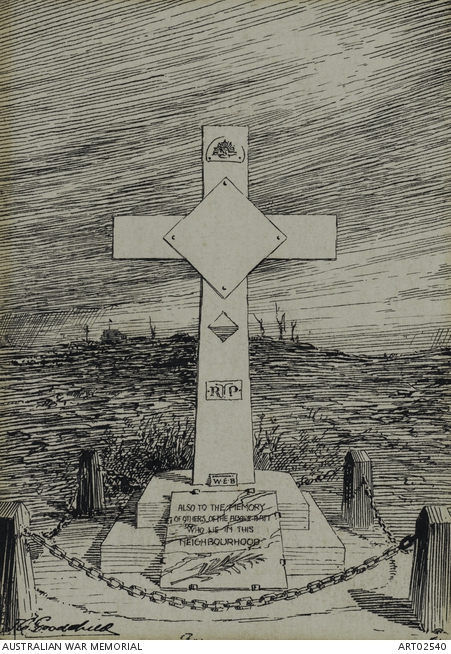 Depicts the memorial to the 20th Battalion AIF at the Passchendaele battlefield. The monument has been erected out of wood with a chain barrier around it, and one of the scarred Passchendaele battlefields behind. The painter, teacher and etcher John Goodchild was born in London and arrived in Adelaide in 1913. He was initially employed as a sign writer and draughtsman before studying at the South Australian School of Arts and Crafts in 1920. From 1934 he taught there, becoming its principal from 1941-45. During the First World War Goodchild joined the AIF, serving in France where he contributed drawings to the field paper, 'The Digger'. This resulted in him being commissioned to do 36 drawings of the war cemeteries in France for the 1920 publication 'Where the Australians Rest'. During the 1920s he studied at the Central School of Arts and Crafts in London and taught there form 1928-29. Throughout his life, Goodchild travelled extensively, visiting Europe, New Zealand, the South Pacific, Hong Kong and Japan. In 1930 he returned to Adelaide and in 1934 was appointed a member of the South Australian School of Arts and Crafts. In April 1945 he joined the AIF as a Lieutenant and was appointed an official war artist. During his commission, Goodchild was initially located at Point Cook, Jervis Bay and in Sydney. From June 1945 he was sent to the South-West Pacific area and went to Japan in 1946, particularly Ofuna, to cover the 'Japanese surrender and the activities of the allied occupation forces'. From 1940-53 he was a member of the Board of the Art Gallery of South Australia and again from 1961-68. He died in Adelaide in 1980.