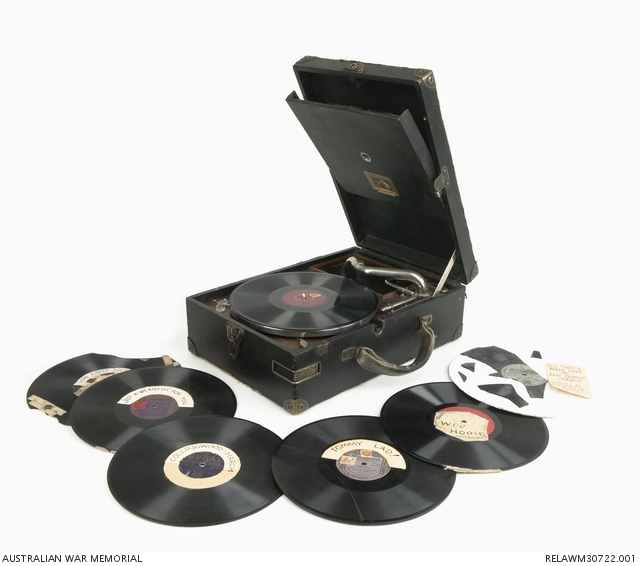 Standard mid thirties portable gramophone. Case is made from wood, bound in black leatherette and supplied with a leather handle, which is not original. All metal fittings are nickel-plated. There is a plated metal winder cover attached to the lid, and the body incorporates a plated brass spare needle holder, and protective plated metal cappings to each corner. The interior is fitted out as standard, with wood veneer deck on which is mounted the turntable, speed control and stop/start levers. The winder and folding playing arm are stored in the soundbox opening, secured by clips; the playing head is an HMV No 4, with mica amplifier. The turntable is lined with brown felt and the reverse has been labelled in pencil 'A.W. MCILVEEN B202 THE SALVATION ARMY'. In addition, 'S ARMY' AND 'S.A.' have been scratched into the veneer. The inside of the lid incorporates a hinged spare record holder.

'His Master's Voice' (HMV) portable windup gramophone and collection of records (see RELAWM30722.002) used in Tobruk and other theatres of war by the Salvation Army, and under the control of Brigadier Arthur McIlveen, a padre in the Salvation Army. For seven months in Tobruk during the siege, this gramophone brought a measure of comfort to thousands of Australians, English, Polish and Indian troops and was also used to entertain German and Italian prisoners- of- war.

It also saw service in New Guinea with another Salvation Army padre and, despite the fact that it travelled some 72, 000 kilometres with McIlveen and was wound up by hundreds of devotees, it still retains its original spring intact. Some of the records were badly damaged by enemy action but, through the ingenuity of some of the troops, were patched up and still remained serviceable. Arthur William McIlveen was born 29 June 1886 at Brodies Plains, New South Wales. After leaving school at age 14, he worked with his father as a tin miner at Tingha before deciding to serve the Salvation Army. He trained with them from 1911-1912 in Melbourne and married in 1916.

McIlveen's reputation as a dynamic street speaker grew during the First World War, and when refused permission by the Salvation Army to accompany the AIF, he enlisted as a soldier instead (assigned to the 16 to 27 (NSW) General Reinforcements, service number 67050), but the war ended while he was en route to France and his ship was recalled to Australia. After discharge, he was posted by the Salvation Army to Dubbo. He continued to serve in country areas throughout NSW and Queensland until 1939; nicknamed 'Mac', his popularity was based in a generous and dedicated spirit. He was promoted to brigadier in 1938.

On 26 February 1940 McIlveen was appointed the Salvation Army welfare officer to 18 Infantry Brigade, AIF. He sailed for Britain in May and reached Egypt in December. Forging a close relationship with 2/9 Battalion, he also served as unofficial padre to other units in the Middle East. In April-August 1941, during the siege of Tobruk, Libya, he attended to the welfare of Australian servicemen, and Italian and German prisoners of war. He gained special affection for playing his records on a battered phonograph, and for braving enemy fire to visit soldiers in the trenches and perimeter posts.

Returning reluctantly to Australia in March 1942, McIlveen was the Salvation Army's secretary for prison-work in New South Wales until his retirement on 29 June 1951. He won the respect of many prisoners for his principles and beliefs. In 1967 he was admitted to the Order of the Founder, the Salvation Army's highest award. The Rats of Tobruk, with whom he maintained strong links, acquired a house for him and his family at Bexley, Sydney. Appointed a Member of the Order of the British Empire in 1961, he was subsequently knighted in 1970. Sir Arthur died on 1 May 1979 at the Repatriation General Hospital, Concord, and was buried in Woronora cemetery with full military honours. The Salvation Army named its museum and research centre at Bexley North after him.