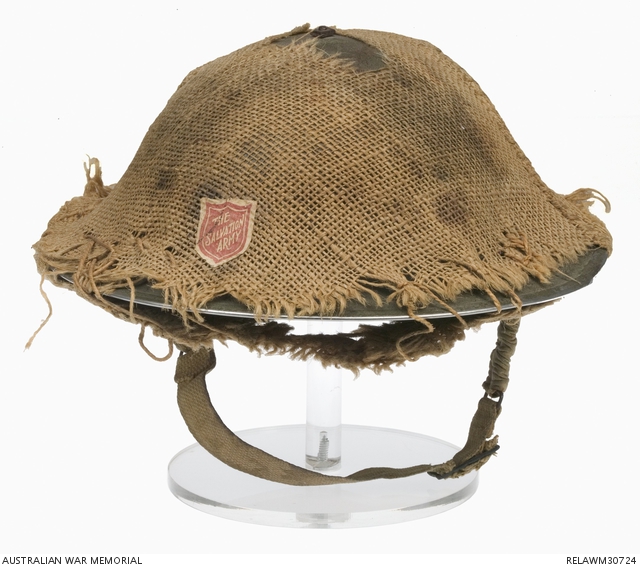 Steel helmet with sandbag hessian covering for camouflage. The hessian is frayed and stained; front and centre is the distinctive red shield insignia of the Salvation Army.

Used by Arthur William McIlveen as a padre in the Salvation Army during the Second World War. McIlveen was born 29 June 1886 at Inverell, New South Wales. After leaving school at the age of 14, he worked with his father as a tin miner at Tingha before deciding to serve the Salvation Army. He trained with them from 1911-1912 in Melbourne and married in 1916.

McIlveen's reputation as a dynamic street speaker grew during the First World War, and when refused permission by the Salvation Army to accompany the AIF, he enlisted as a soldier instead embarking with the 23rd General Reinforcements on SS Wyreema exactly four weeks before the Armistice. The war ended while he was en route to France and his ship was recalled to Australia, arriving 21 December 1918. After discharge, he was posted by the Salvation Army to Dubbo. He continued to serve in country areas throughout NSW and Queensland until 1939; nicknamed 'Mac', his popularity was based in a generous and dedicated spirit. He was promoted to brigadier in 1938.

On 26 February 1940 McIlveen was appointed the Salvation Army welfare officer to 18 Infantry Brigade, AIF. He sailed for Britain in May and reached Egypt in December, aged 45. Forging a close relationship with 2/9 Battalion, he also served as unofficial padre to other units in the Middle East. In April-August 1941, during the siege of Tobruk, Libya, he attended to the welfare of Australian servicemen, and Italian and German prisoners of war. He gained special affection for playing records on a battered phonograph, and for braving enemy fire to visit soldiers in the trenches and perimeter posts.

Returning reluctantly to Australia in March 1942, McIlveen was the Salvation Army's secretary for prison-work in New South Wales until his retirement on 29 June 1951. He won the respect of many prisoners for his principles and beliefs. In 1967 he was admitted to the Order of the Founder, the Salvation Army's highest award. The Rats of Tobruk, with whom he maintained strong links, acquired a house for him and his family at Bexley, Sydney. Appointed a Member of the Order of the British Empire in 1961, he was subsequently knighted in 1970. Sir Arthur died on 1 May 1979 at the Repatriation General Hospital, Concord, and was buried in Woronora cemetery with full military honours. The Salvation Army named its museum and research centre at Bexley North after him.