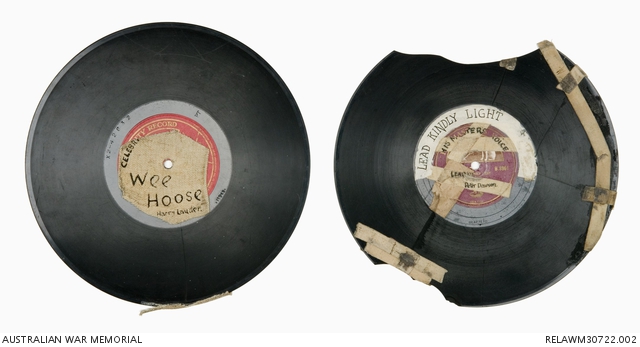 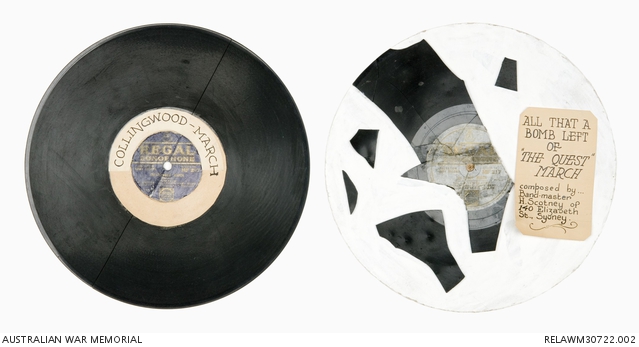 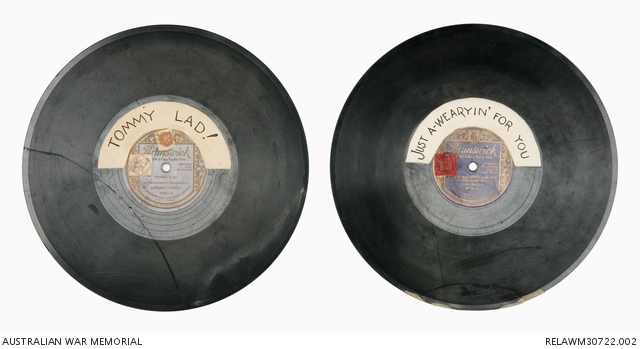 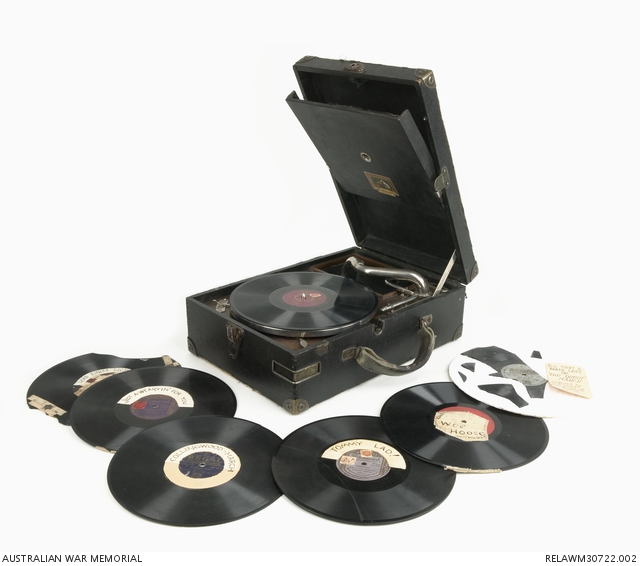 Small collection of 78 rpm gramophone records, all of which have been broken or shattered to a greater or lesser extent, and subsequently repaired with cloth tape (resulting in only one side being playable), or by having another 78 record glued to the reverse. Each is also identified with a label glued to the inner run-out track, while most also have a Palings Sydney price ticket of 1¼d, overwritten in pencil with 'Red Shield', as well as a red Salvation Army sticker. The records are (salvaged side listed first): Renate Muller - 'Just Because I Lost My Heart to You' / 'Today I Feel So Happy' (Regal C21415); Peter Dawson - 'Lead Kindly Light' / 'Rock of Ages' (HMV B8961); Marie Morrisey - 'Just A-Wearyin' For You' / 'Coming Home' (Brunswick 10232); Richard Boneli - 'Tommy Lad!' (Brunswick 10266); this record has been repaired by having a damaged version of Harry Lauder's comic recital 'A Wee Hoose 'mang the Heather' (Zonophone 1117) glued to the reverse; Plumstead Salvation Army Band - 'Collingwood March' / 'The Priceless Gift' (Regal MF297). The reverse of this record has a line of melted scratch marks, possible evidence of shrapnel damage. Salvation Army Band - 'The Quest' (Regal MF217). All that remains of this record are five shards glued to a circle of card, and labelled 'All that a bomb left of The Quest'; another copy of Harry Lauder's recital 'A Wee Hoose 'mang the Heather' (Zonophone 1117), but playable, with repairs.

Collection of seven x 78 rpm records, labelled with the Salvation Army sticker, used with a 'His Master's Voice' (HMV) portable windup gramophone (see RELAWM30722.001) and used in Tobruk and other theatres of war by the Salvation Army. These were under the control of Brigadier Arthur McIlveen, a padre in the Salvation Army. For 7 months in Tobruk during the siege, the gramophone and its selection of records brought a measure of comfort to thousands of Australians, English, Polish and Indian troops and was also used to entertain German and Italian prisoners- of- war. They were also later used in New Guinea by another Salvation Army padre. The records were badly damaged by enemy action but, through the ingenuity of some of the troops, were patched up and still remained serviceable though badly scratched. It is interesting to note which side of the record was selected as the favourite; the means of repair preclude the reverse being played. Both gramophone and records were in the care of Arthur William McIlveen, who was born 29 June 1886 at Brodies Plains, New South Wales. After leaving school at age 14, he worked with his father as a tin miner at Tingha before deciding to serve the Salvation Army. He trainedwith them from 1911-12 in Melbourne and married in 1916. McIlveen’s reputation as a dynamic street speaker grew during the First World War, and when refused permission by the Salvation Army to accompany the AIF, he enlisted as a soldier instead (assigned to the 16 to 27 (NSW) General Reinforcements, service number 67050), but the war ended while he was en route to France and his ship was recalled to Australia. After discharge, he was posted by the Salvation Army to Dubbo. He continued to serve in country areas throughout NSW and Queensland until 1939; nicknamed ‘Mac’, his popularity was based in a generous and dedicated spirit. He was promoted brigadier in 1938. On 26 February 1940 McIlveen was appointed the Salvation Army welfare officer to 18 Infantry Brigade, AIF. He sailed for Britain in May and reached Egypt in December. Forging a close relationship with 2/9 Battalion, he also served as unofficial padre to other units in the Middle East. In April-August 1941, during the siege of Tobruk, Libya, he attended to the welfare of Australian servicemen, and Italian and German prisoners of war. He gained special affection for playing his records on a battered phonograph, and for braving enemy fire to visit soldiers in the trenches and perimeter posts. Returning reluctantly to Australia in March 1942, McIlveen was the Salvation Army's secretary for prison-work in New South Wales until his retirement on 29 June 1951. He won the respect of many priosners for his principles and beliefs. In 1967 he was admitted to the Order of the Founder, the Salvation Army's highest award. The Rats of Tobruk, with whom he maintained strong links, acquired a house for him and his family at Bexley, Sydney. Appointed a Member of the Order of the British Empire in 1961, he was subsequently knighted in 1970. Sir Arthur died on 1 May 1979 at the Repatriation General Hospital, Concord, and was buried in Woronora cemetery with full military honours. The Salvation Army named its museum and research centre at Bexley North after him. (Adapted from Australian Dictionary of Biography entry).