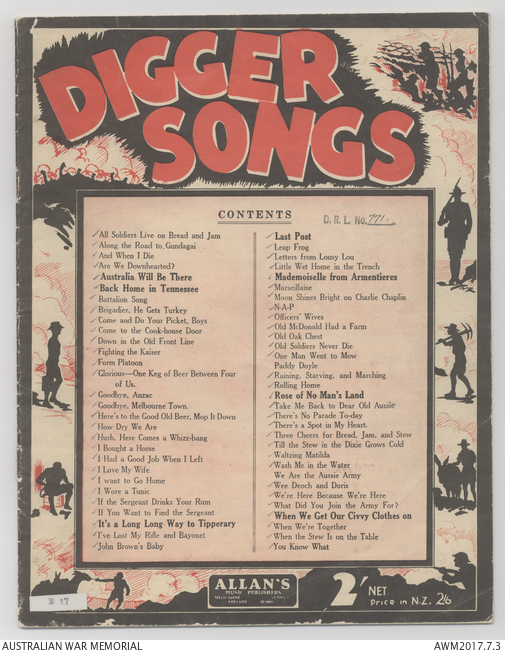 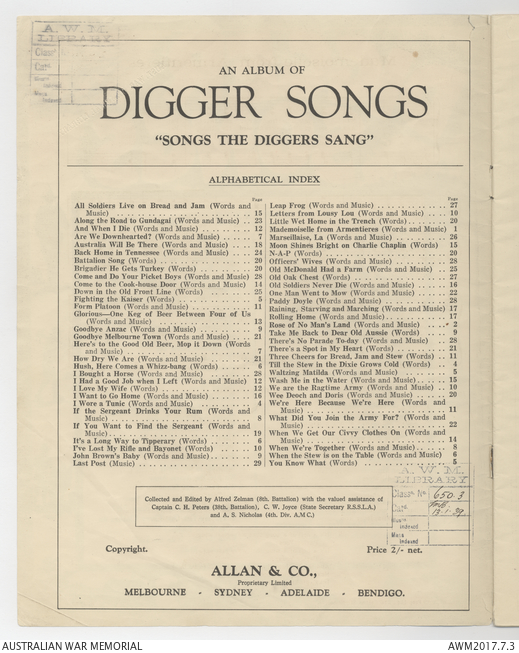 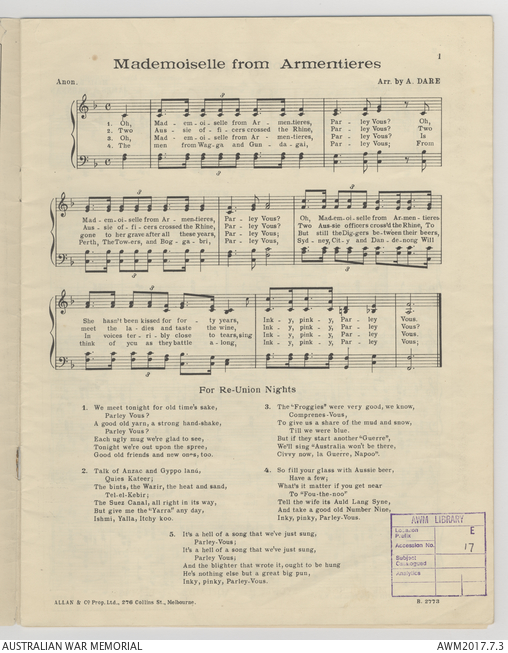 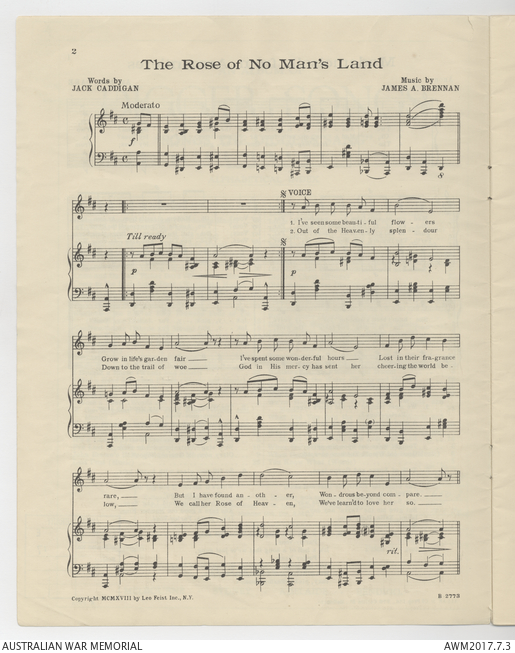 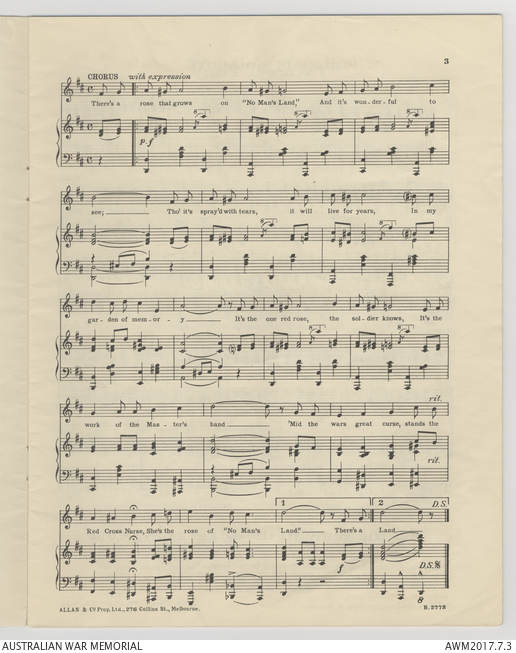 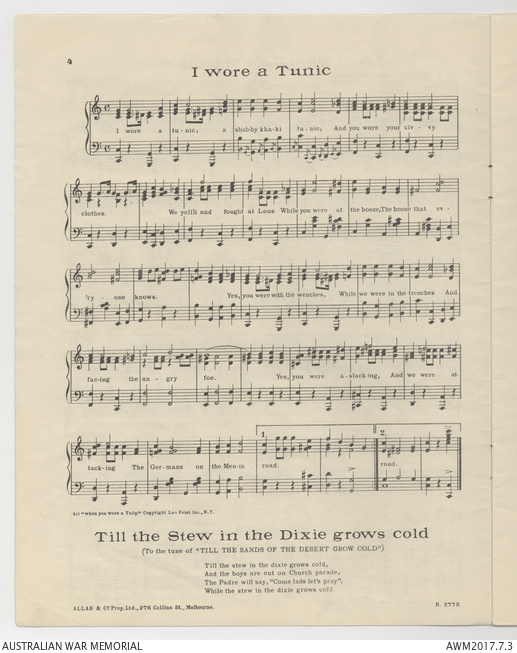 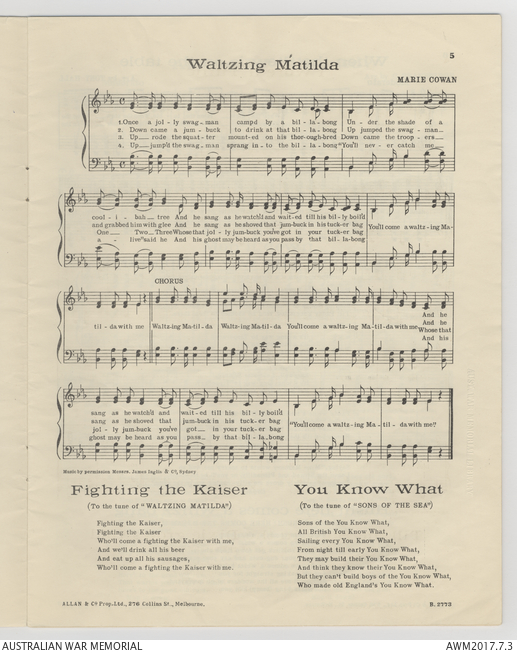 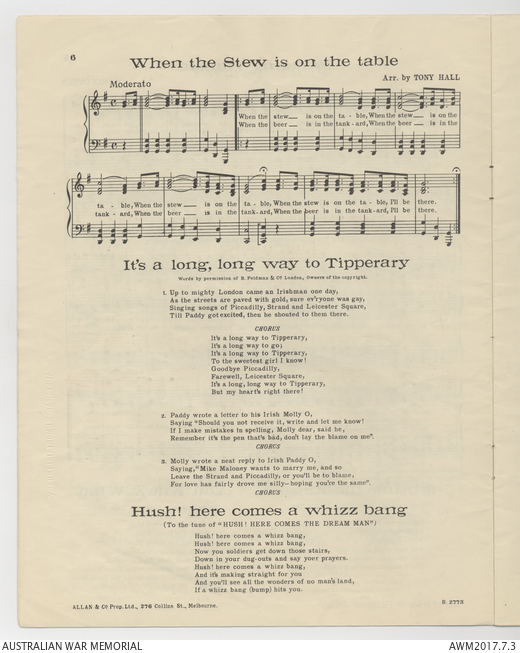 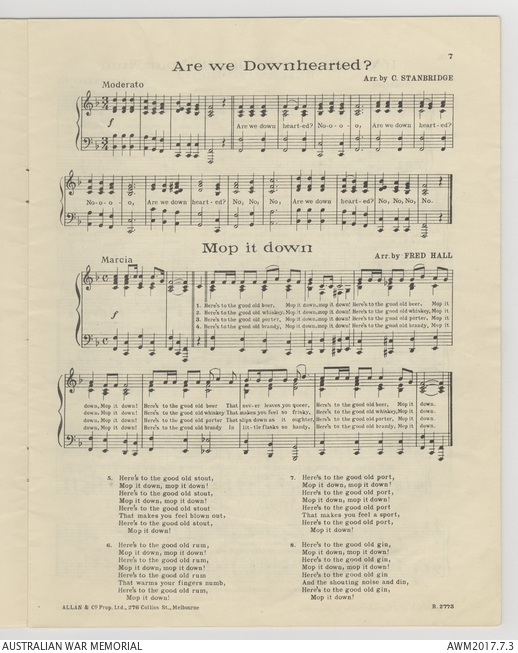 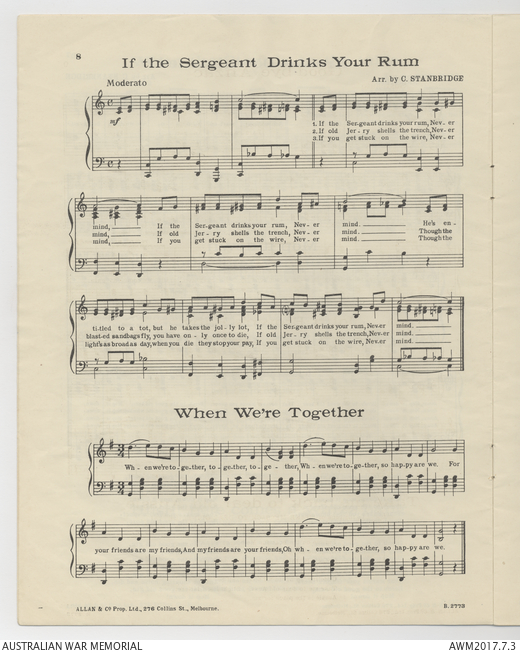 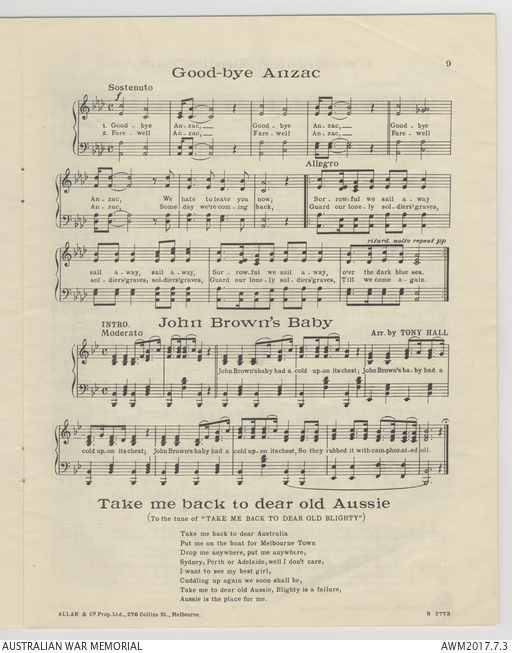 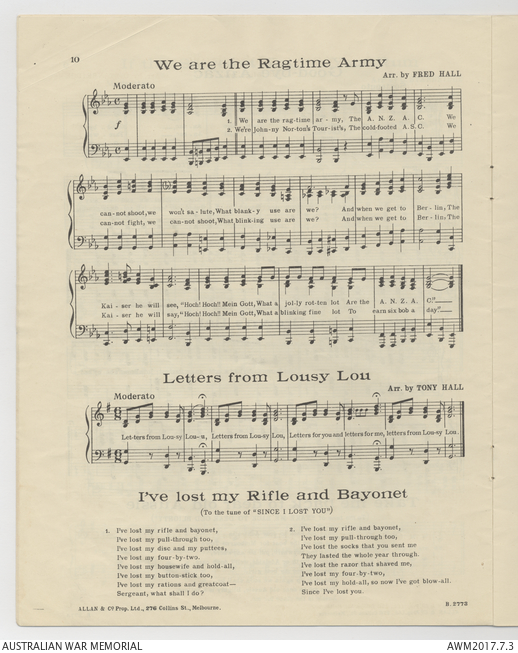 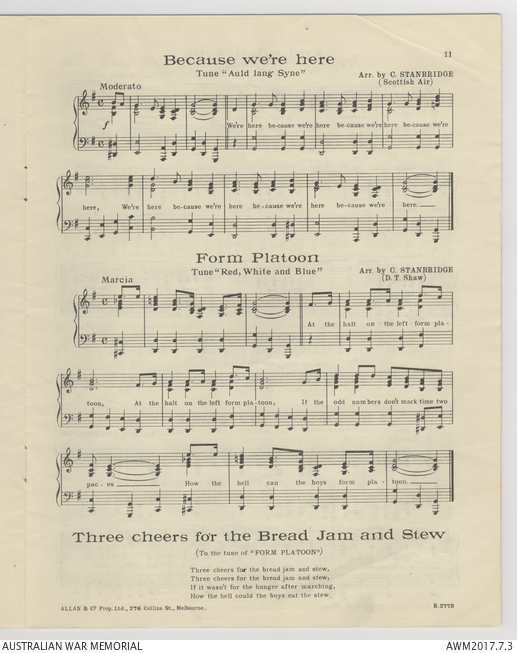 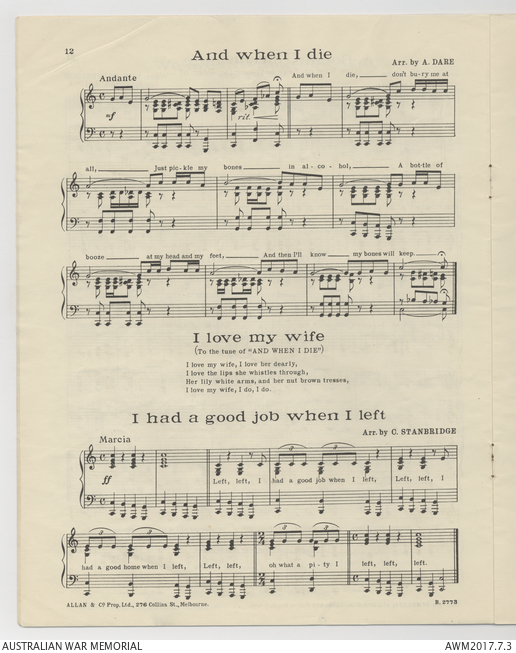 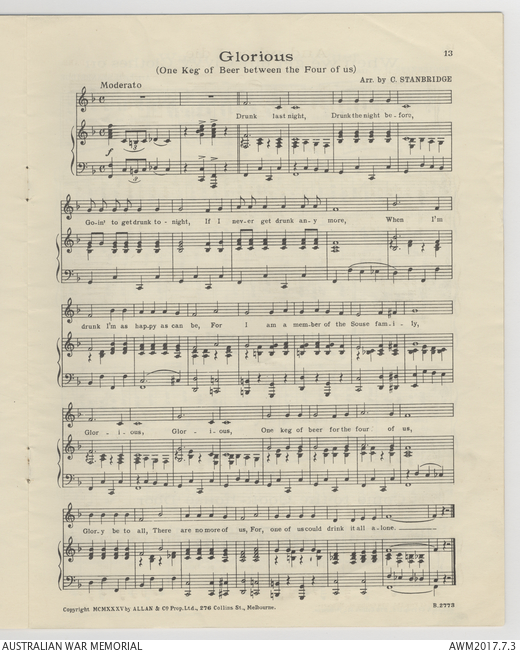 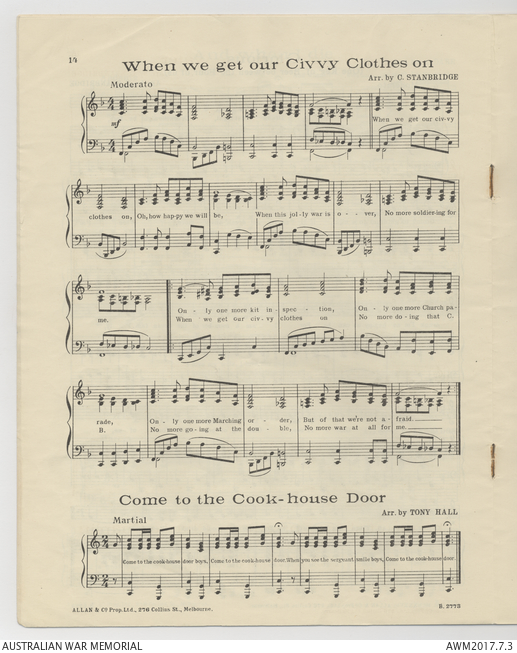 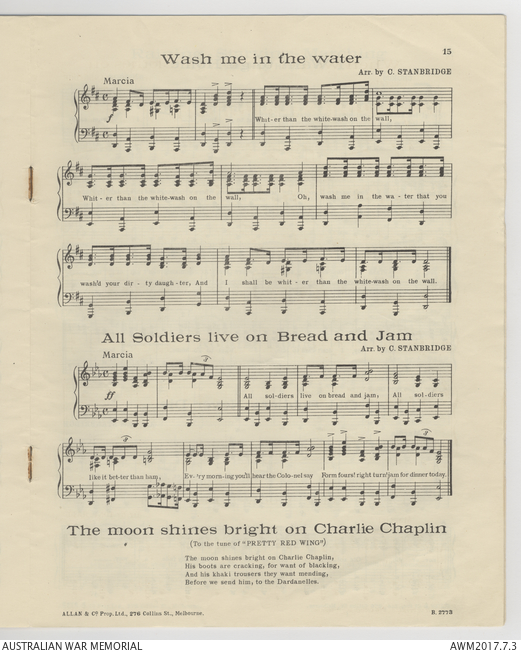 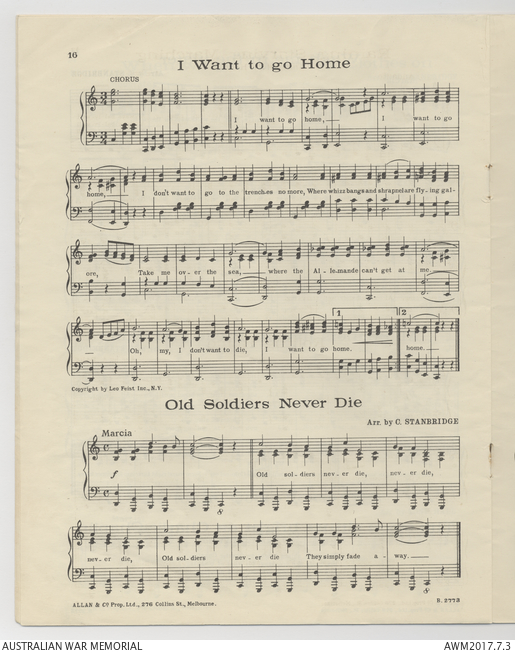 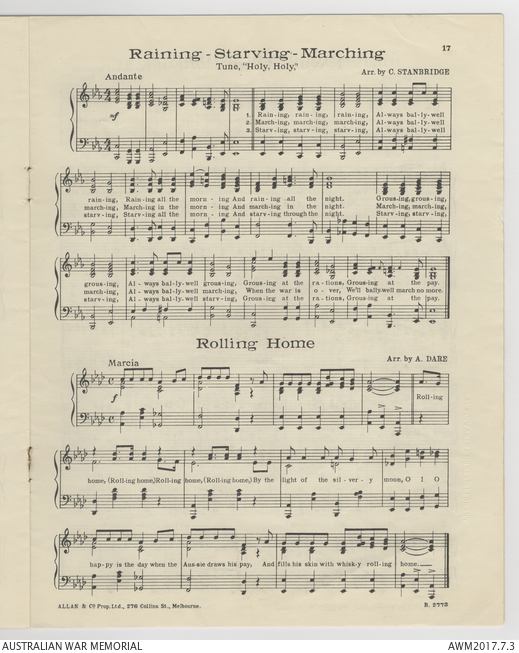 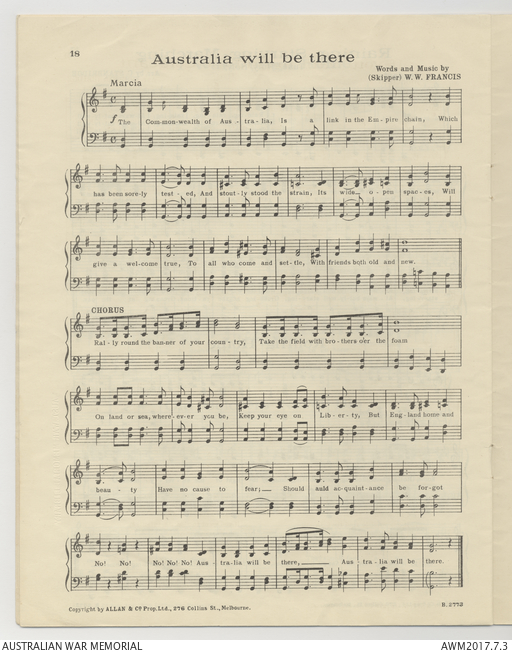 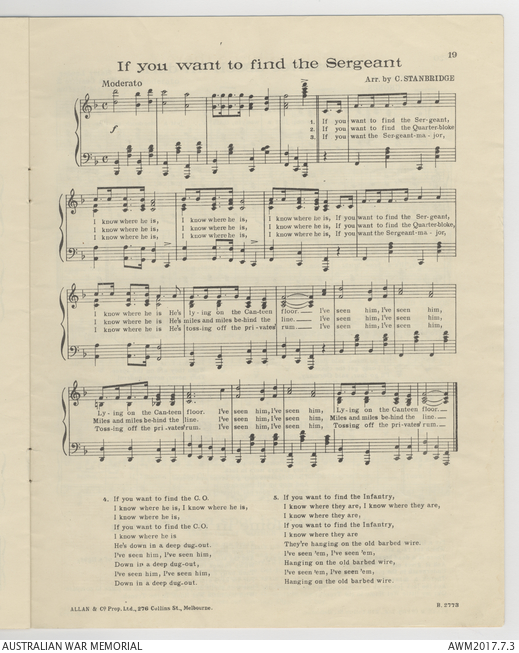 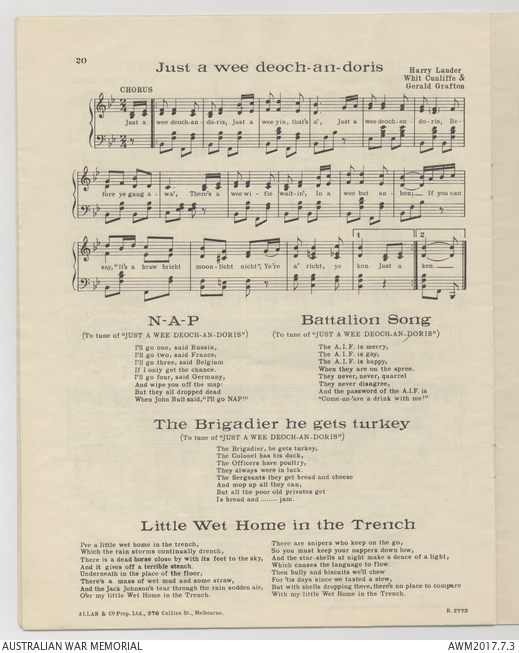 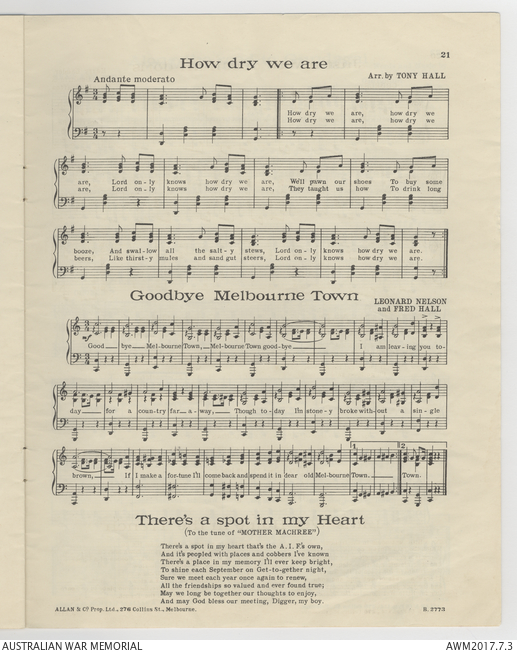 Album of songs titled "An album of digger songs: 'songs the diggers sang'". This edition was published by Allan & Co, Melbourne about 1935 and contains approximately 61 titles. The album also includes many parodies of songs that were popular during the First World War. The contents of the album were collected and edited by Alfred Zelman who served with the 8th Battalion during the First World War. He was assisted by Captain Charles Harold Peters who served with the 39th Battalion; C W Joyce, the State Secretary of the Returned Soldiers and Sailors League of Australia; and Alwin Stevens Nicholas who served with 4th Division, Australian Medical Corps.

The cover of the album features the title "Digger Songs" in red lettering above a box, with a black border, that contains an alphabetical listing of the contents of the album. Black silhouettes of soldiers, in a variety of scenes, surround this list. This alphabetical listing is repeated inside the front cover. The back cover features the names of six albums that the publisher believes "you should have in your home", together with the contents and price for each album. The album sold for 2/- in Australia and 2/6 in New Zealand.

The contents of this songbook include:
"All soldiers live on bread and jam";
"Along the road to Gundagai";
"And when I die";
"Are we downhearted?";
"Australia will be there";
"Back home in Tennessee";
"Battalion song";
"Brigadier, he gets Turkey";
"Come and do your picket, boys";
"Come to the cook-house door";
"Down in the old front line";
"Fighting the Kaiser";
"From platoon";
"Glorious - one keg of beer between four of us";
"Goodbye, Anzac";
"Goodbye, Melbourne Town";
"Here's to the good old beer, mop it down";
"How dry we are";
" Hush, here comes a whizz-bang";
"I bought a horse";
"I had a good job when I left"
"I love my wife";
"I want to go home";
"I wore a Tunic";
"If the sergeant drinks your rum";
"If you want to find the sergeant";
"It's a long way to Tipperary";
"I've lost my rifle and bayonet";
"John Brown's baby";
"Last post";
"Leap frog";
"Letters from lousy Lou";
"Little wet home in the trench";
"Mademoiselle from Armentieres";
"Marseillaise";
"Moon shines bright on Charlie Chaplin";
"N-a-p";
"Officers' wives";
"Old McDonald had a farm";
"Old oak chest";
"Old soldiers never die";
"One man went to Mow";
"Paddy Doyle";
"Raining, starving, and marching";
"Rolling home";
"Rose of no man's land";
"Take me back to dear old Aussie";
"There's no parade to-day";
"There's a spot in my heart";
"Three cheers for bread, jam and stew";
"Till the stew in the Dixie grows cold";
"Waltzing Matilda";
"Wash me in the water";
"We are the Aussie army";
"Wee Deoch and Doris";
"We're here because we're here";
"What did you join the army for?";
" When we got our civvy clothes on";
"When we're together";
"When the stew is on the table";
"You know what".