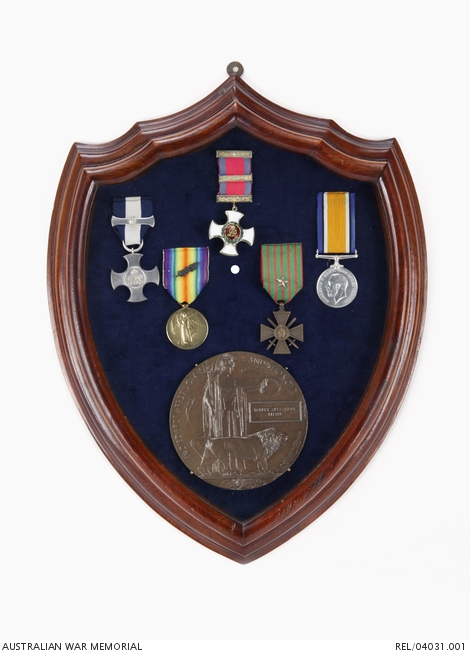 Associated with the service of Captain Robert Alexander Little. Little was born in Hawthorn, Victoria on 19 July 1895 and was a commercial traveller in 1914 when he unsuccessfully attempted to gain one of the four places on offer at No. 1 Flying School, Point Cook, Victoria. Little sailed for England in July 1915 at his own expense and qualified as a pilot on 27 October. On 14 January 1916 he entered the Royal Naval Air Service (RNAS) as a sub-lieutenant and posted to Dover, Kent. In June Little was posted to No. 1 Wing, Dunkirk where he saw action against the submarine base at Zeebrugge. On 26 October he was posted to No. 8 Squadron 'Naval 8' flying Sopwith Pups over the Western Front. Little shot down his first enemy aircraft on 1 November and by March 1917 had scored nine aerial victories. When he went on leave to England that August, his tally stood at 37, with many more damaged. In recognition, Little was awarded the Distinguished Service Cross (DSC), the Distinguished Service Order (DSO) and bar, the Croix de Guerre, and was mentioned in despatches.

Little was awarded the Distinguished Service Order (DSO) on 11 August 1917, and a bar on 14 September 1917. His citation for the DSO reads: 'For gallantry in action and for exceptional skill and daring in aerial combats. Since the 9th May, 1917, besides having driven off numerous artillery aeroplanes and damaged six hostile machines, he has destroyed six others. On the 26th June, 1917, an Aviatik being seen from the aerodrome he went up to attack it. He engaged it and fired a burst at close range, and the enemy machine stalled and went down in flames'.

Little was also awarded the Distinguished Service Cross (DSC) and bar, the Croix de Guerre, and was mentioned in despatches.

Promoted to Flight Commander, Little returned to France in March 1918, flying Sopwith Camels with 3 Squadron, RNAS. On 1 April when the RNAS and the Royal Flying Corps were amalgamated to form the Royal Air Force, he became Captain Little of No. 203 Squadron, RAF.

On the night of 27 May 1918 Little took off from Ezil le Hamel to intercept a group of German gotha bombers. He was fatally wounded in the groin and crashed near Norviz, where he was found the following morning. He was buried in the village cemetery but was later reinterred at Wavans British War Cemetery.

Little is officially credited with a tally of 47 aerial victories, making him the most successful Australian ace of the war, the eighth of all British Commonwealth aces and the fourteenth of all aces from both sides of the conflict.