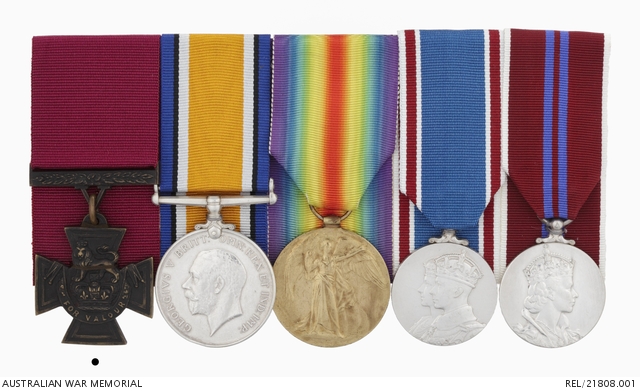 James Park 'Jimmy' Woods was born at Gawler, South Australia on 2 January 1891. Raised by a stepsister after his parents' death he tried to enlist in the AIF but was rejected as too short. Eventually accepted in Western Australia in September 1916, he reached France a year later as private 3244 with 48 Battalion.

Woods exceptional courage in one of his battalion's last actions of the war on 18 September 1918 near Le Verguier earned him the Victoria Cross. With a small patrol he captured a German post, then defended it against several counter-attacks by jumping onto the parapet and throwing bombs handed to him by his companions. The recommendation for the award reads:

'For conspicuous gallantry and devotion to duty during the operations near LE VERGUIER, N.W. of St. QUENTIN on the 18th. September 1918. Pte. WOODS formed one of a party of three to patrol the right flank. He encountered a very formidable enemy strong point consisting of about 25 men with four heavy and two light Machine Guns.

This strong point commanded the greater portion of our position and it was of the utmost importance to us, inasmuch as it gave us a commanding view of the whole Canal system. The strong point was situated at the junction of four enemy fire trenches apparently sited with a view to protecting the approaches to the village of BELLENGLISE.

Private WOODS appreciating the great importance of this position, and realising the necessity for its immediate capture, fearlessly attacked with his rifle and bayonet, capturing one of the enemy and wounding the second with his bayonet, forcing the remainder to retire. After the capture of the strong point it was found that one of the party was wounded, Pte WOODS, although himself slightly gassed, stubbornly defended the post. The enemy ascertaining that only two men opposed them immediately attempted to recapture the strong point. The counter attack by the enemy was carried out with at least 80 men attacking up the three trenches and across the open ground. This meant that Pte. WOODS was attacked from both flanks and the front. He fearlessly jumped on the parapet and opened fire on the attacking enemy, inflicting several casualties.
During this operation he was exposed to very heavy Machine Gun, rifle fire and bombing, but with dogged determination he kept up his fire thus holding up the enemy until help arrived enabling the enemy counter attack to be repulsed with heavy losses.

The capture of this strong point was the means of securing our flank which had previously been in the air, and also enabled us to get in touch with the troops on our flank.

Undoubtedly had it not been for the remarkable initiative, determination and bravery displayed by Private WOOD it would have necessitated committal of greater number of men to the attack of this post.

Private WOODS was a splendid example of courage and determination throughout the whole operation.'

Returning to Australia, Woods took up a small vineyard and orchard in the west. Plagued by ill health from his war service, he died in 1963. His eldest son, Pilot Officer Gordon Woods, was killed in flight training with the RAAF in 1943 and is commemorated on the Memorial's Roll of Honour.