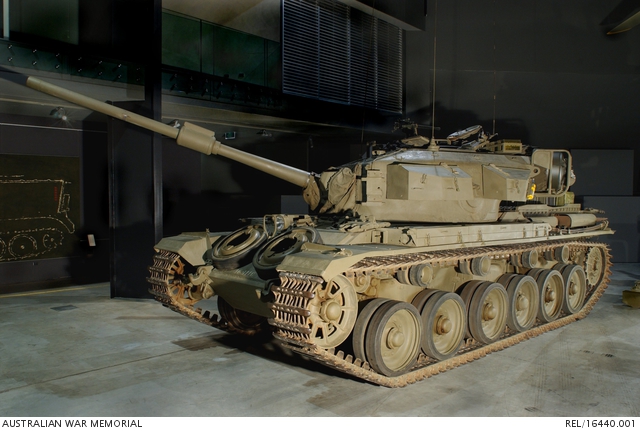 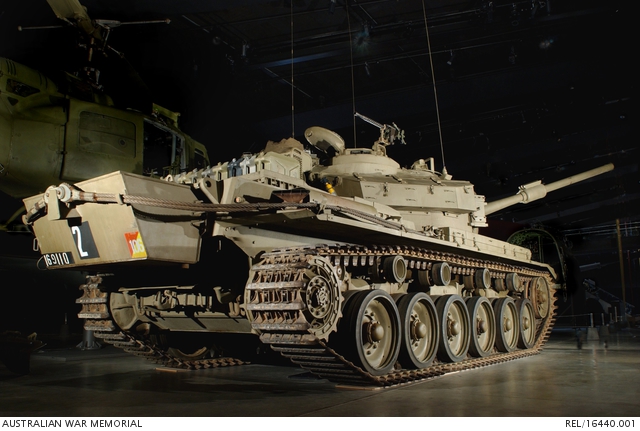 Centurion Mk 5/1 Main Battle Tank with damage to the hull near the right hand exhaust shroud, possibly sustained in active service. The vehicle is finished overall in light olive drab lustreless paint. On the front glacis plate the Army Registration Number (ARN) 169110 is stencilled in white numerals, 75mm high. An armoured corps tactical sign, consisting of a 200mm square divided diagonally with red in the upper left half, and yellow in the lower right half, is painted onto the upper glacis plate and on the rear fuel tank. The vehicle call sign 2 is painted onto the rear fuel tank and on a plate attached to the turret bustle basket.

This tank, with Army Registration Number (ARN) 169110, was issued to 2 Troop, B Squadron, 1 Armoured Regiment in South Vietnam at the beginning of June 1969, and took part in the Battle for Binh Ba on 6 June, under the command of 39036 Second Lieutenant David Barry Ritchie.

In 1970, it continued on operational duties in Vietnam with 2 Troop, A Squadron 1 Armoured Regiment. On 18 February 1970 the tank, commanded by 235339 Lieutenant John Harry Brennan, was hit by 3 rocket propelled grenades (RPG) during Operation Hammersley, and received damage to the right hand exhaust shroud, right hand rear track bin and left hand track guard. The tank remained battle worthy throughout the action, and after repairs continued to serve until it was transported back to Australia in December 1970. On its return to Australia, it was rebuilt and then used for training purposes until retired in 1977.