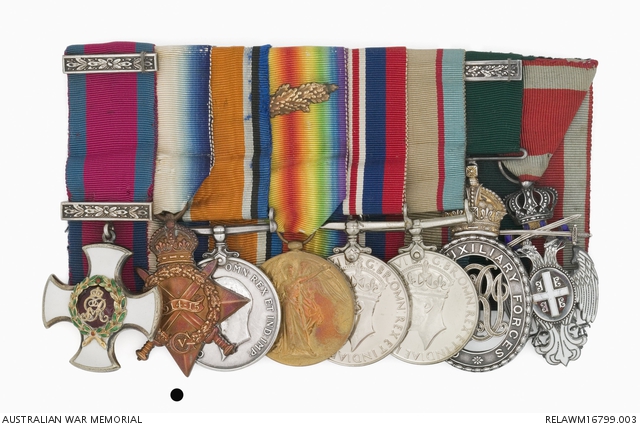 Associated with the service of Ernest Edward Herrod. Herrod was born on 21 June 1885 at Redfern, Sydney. He served joined the militia in 1905, initially serving with the 1st Australian Light Horse Regiment. In 1913 he transferred to the 25th Signal Company, Australian Engineers. With the outbreak of war, he enlisted as a second lieutenant in the Australian Imperial Force (AIF) on 17 August 1914. He landed at Gallipoli on 25 April 1915 with the 2nd Battalion and was promoted to lieutenant that day. He was promoted to captain in September and continued to work at Anzac until he was evacuated sick in December 1915. He was sent to France with 2nd Battalion in 1916 and promoted to Major in October. He was given temporary command of 2nd Battalion in early 1917 for three months. On 10 May 1917 he was given temporary command of 7th Battalion AIF, with the temporary rank of lieutenant colonel. He was made permanent lieutenant colonel and commander of 7th Battalion in August and commanded the battalion for the rest of the war. He was Mentioned in Dispatches (MID) four times through the war. In 1917 he was awarded the Serbian Order of the White Eagle 5th Class for his work as part of the Mediterranean Expeditionary Force (MEF). He was awarded the Distinguished Service Order (DSO) in 1918. In 1919 he was awarded the Companion of the Order of Saint Michael and Saint George (CMG). He commanded the Australian troops marching in the 1919 Victory Parade in London and returned to Australia on board HMAT Euripides, arriving in Australia in October 1919. After demobilization he resumed service in the citizen forces and commanded the 45th Battalion from 1921 to 1926. In 1926 he received the Colonial Auxiliary Forces Officers Decoration for 20 years of service. During the Second World War Herrod held several AIF staff appointments in Australia, including commanding the 3rd Rehabilitation Unit. He retired as an honorary colonel in 1947 and died on 7 June 1966.