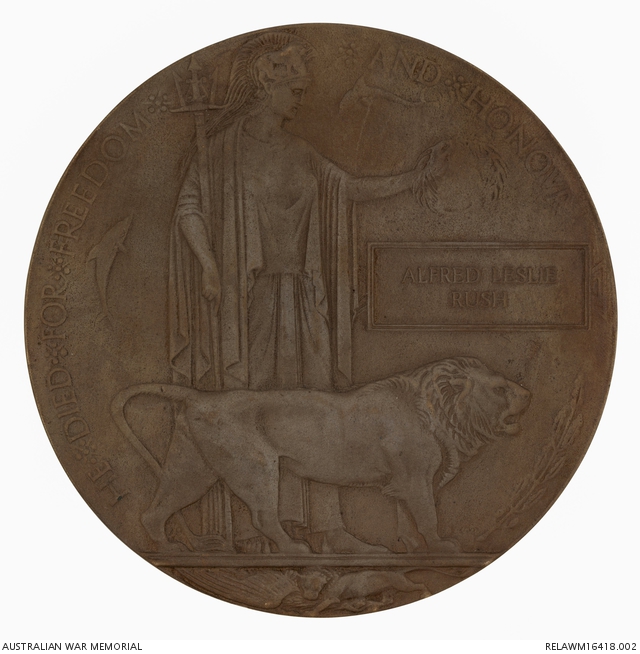 Bronze next of kin plaque, showing on the obverse, Britannia holding a laurel wreath, the British lion, dolphins, a spray of oak leaves and the words 'HE DIED FOR FREEDOM AND HONOUR' around the edge. Beneath the main figures, the British lion defeats the German eagle. The initials 'ECP', for the designer Edward Carter Preston appear above the lion's right forepaw. A raised rectangle above the lion's head bears the name 'ALFRED [Sic] LESLIE RUSH'. A checker's mark, '19', is impressed between the lion's rear right paw and tail.

Arthur Leslie Rush was born at Bundanoon, New South Wales in 1888. He was working as an orchardist when he enlisted in the AIF on 16 August 1915. A clerical error at his enlistment meant that his name is often recorded in official records as Alfred Leslie Rush. After initial training he was assigned to 3 Battalion as a private with the service number 3420, and embarked with the 11th Reinforcements aboard HMAT Euripides (A14) at Sydney on 2 November 1915.

While in Egypt, Rush was transferred to 14 Machine Gun Company (14 MGC) in March 1916 and undertook further training. In June his unit sailed for France. The company's first action was in support of the disastrous infantry assault at Fromelles on the night of 19 July 1916. In September Rush was promoted to corporal.

Rush served with his unit for the remainder of 1916. In January 1917 he was promoted to Sergeant, and was subsequently withdrawn from the line until July 1917 to undertake a number of training courses.

He rejoined 14 MGC on 11 July 1917, by which time his entire brigade was being withdrawn from the line for a period of training. It was at this time that the allied operational focus shifted to the Ypres sector in Belgium.

In December 1917 Rush was commissioned as a second lieutenant. After a month of training he rejoined 14 MGC at the start of February 1918. He was serving with his unit during the German Spring Offensive in March when he was killed during the fighting around Villers-Bretonneux on 25 April 1918. Rush was reportedly making a reconnaissance of an enemy gun position when he came under machine gun fire and was hit several times. He was initially buried on the eastern outskirts of Villers-Bretonneux.

In 1920 his widow, Eileen, who had remarried in 1918, to Roy Wood, received notification that Arthur's remains had been exhumed and reinterred in Adelaide Cemetery. This commemorative plaque was sent to her in December 1922