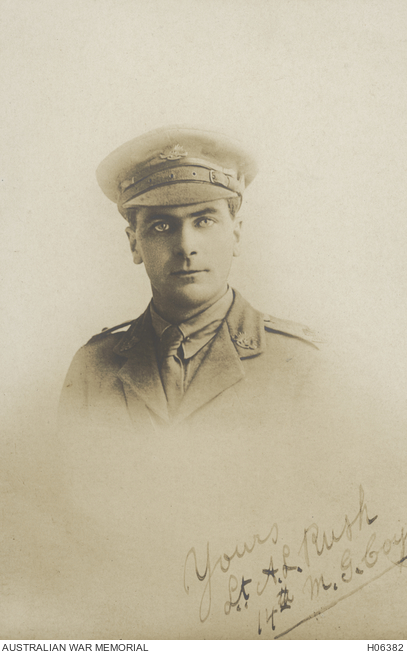 Studio portrait of Lieutenant (Lt) Alfred Leslie Rush DCM (also known as Arthur Leslie Rush), 14th Machine Gun Company. An orchardist from Bundanoon, NSW prior to enlistment, Lt Rush embarked with the rank of Private with the 11th Reinforcements, 3rd Battalion from Sydney on HMAT Euripides on 2 November 1915. Later transferring to the 53rd Battalion and then to the 14th Machine Gun Company, he was promoted to Sergeant and awarded the Distinguished Conduct Medal "During enemy counterattacks he worked his gun with coolness and courage, and caused many casualties to the enemy, inspiring the men under him". Later promoted to Lieutenant, he was killed in action at Villers-Bretonneux on 25 April 1918, aged 29, and was buried in the Adelaide Cemetery, Villers-Bretonneux, France. His brother 4890 Lance Corporal Frederic Erskine Rush had previously died of wounds received in action.