Photograph of the grave of Lieut A L Rush 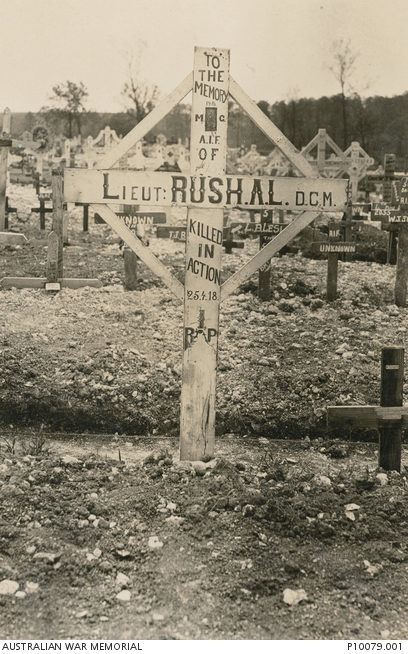 The grave in Adelaide Cemetery, Villers-Bretonneux, France, of Lieutenant (Lt) Arthur Leslie Rush DCM, 14th Machine Gun Company. Lt Rush was an orchardist in Bundanoon, NSW, before enlistment, and embarked from Sydney aboard HMAT Euripides (A14) on 2 November 1915. He began his service as a Private and was promoted several times. He was awarded the Distinguished Conduct Medal (DCM) on 15 March 1918: "During enemy counterattacks he worked his gun with coolness and courage, and caused many casualities to the enemy, inspiring the men under him". Lt Rush was killed in action on 25 April 1918 whilst making a reconnaissance of a gun position during an operation in the vicinity of Villers-Bretonneux.