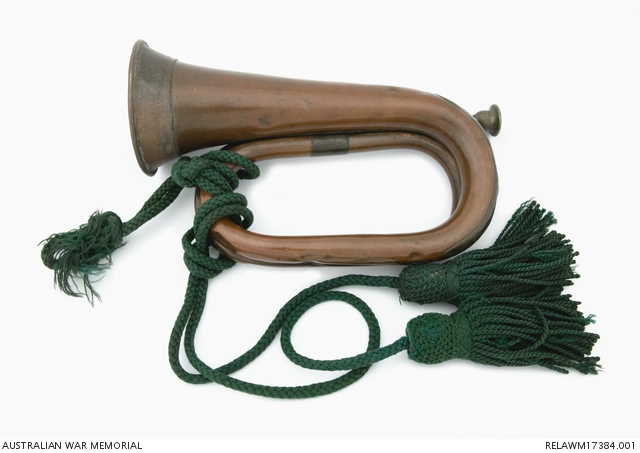 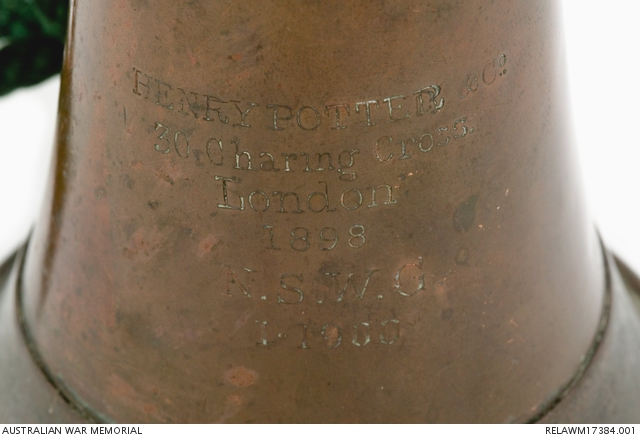 Standard short double loop brass bugle with silver mouthpiece. Outside of bell is engraved 'Henry Potter & Co 30 Charing Cross London 1898 NSW G 1.1900'. The body is heavily tarnished, is missing the mouthpiece safety chain and is fitted with a pair of green cords.

Related to the Boer War service of 404 Bugler Herbert V Masters, New South Wales Medical Corps. The Second Contingent of the New South Wales Medical Corps embarked from Sydney on 17 January 1900 in SS Moravian. They disembarked at East London, South Africa on 22 February and proceeded to Sterkstroom. There they were attached to General Gatacre's column. Part of the contingent stayed at Sterkstroom. The rest advanced with the column to Bloemfontein. Some of the contingent embarked from Cape Town in SS Harlech Castle on 3 November 1900, arriving at Sydney on 8 December. The Main portion of the contingent embarked over a month later on 13 December 1900 in SS Orient, arriving at Sydney on 8 January 1901. Smaller units of the Second Contingent returned in SS Tongariro and SS Wilcannia.