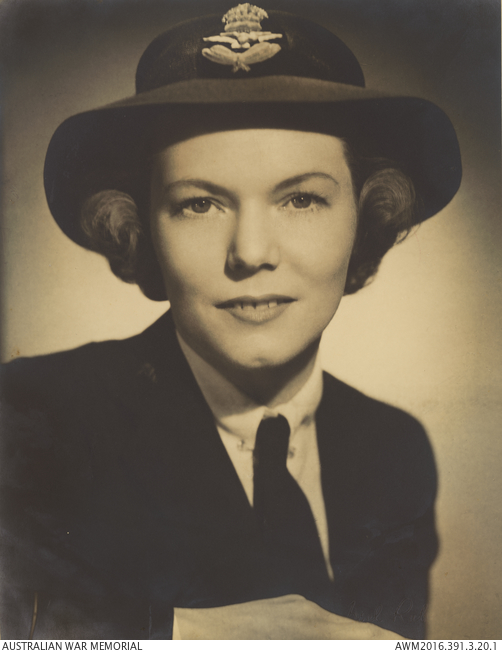 Studio portrait of 501071 Senior Sister Thelma Minnie (Thel) Moxham RRC RAAF. Thelma Moxham was born in Singleton on 12th July 1914, the fifth of six children to Henry and Minnie Moxham. Following her father’s death during the influenza epidemic of 1919, the family moved to Dubbo in 1922. Thelma graduated as a nurse at Royal Prince Alfred Hospital, Sydney in 1937 and was invited on staff at the Hospital. She enlisted in the newly formed RAAF Nursing Service in late 1940, was promoted to Senior Sister in 1942, sent on special medical escort duty to the United States, England and Canada between January and June 1943 and served in New Guinea in charge of No2 Medical Clearing Station, Madang, between July 1943 and December 1944. In early 1945 Senior Sister Thelma Childs returned to Australia and served Acting Matron at ‘Rona’, No3 RAAF Hospital, Bradfield Park. Her appointment in the RAAF Nursing Service was terminated upon her marriage to Captain F.H Childs MC on 6th November 1945. In 1946 she was awarded the Royal Red Cross medal (First Class).