Formal outdoor portrait of a group of Aboriginal men, women and children 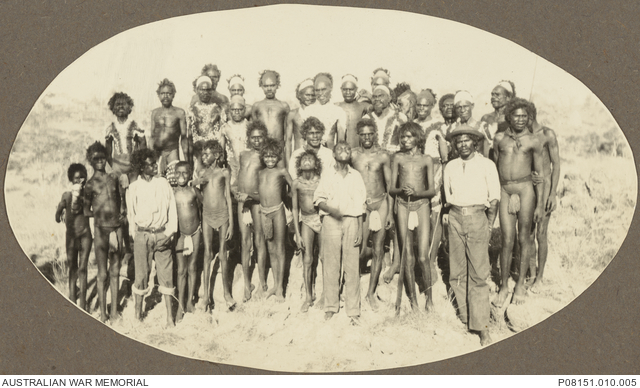 Formal outdoor portrait of a group of Aboriginal men, women and children. Some men and women wear European clothing while others wear traditional Aboriginal dress of loincloths. Portrait depicts some tribal body scarring and traditional body paint. Original caption reads: "[Aboriginal men and women] in the North. Note the lady making faces (?) centre front row." One of a series of photographs either taken or collected by Roy Cecil Phillipps (later Squadron Leader R.C Phillipps MC & Bar DFC) when employed by the pastoralist firm Connor, Doherty & Durack Ltd in the Kimberley region of Western Australia from 1912 until his enlistment in the AIF in April 1915. The photographs were sent to his mother in Perth, Mrs Cecil R. Phillipps, who arranged them in an album and wrote the accompanying captions.